A Red Line in the Sand: Diplomacy, Strategy, and the History of Wars That Might Still Happen (Pegasus - 2021) 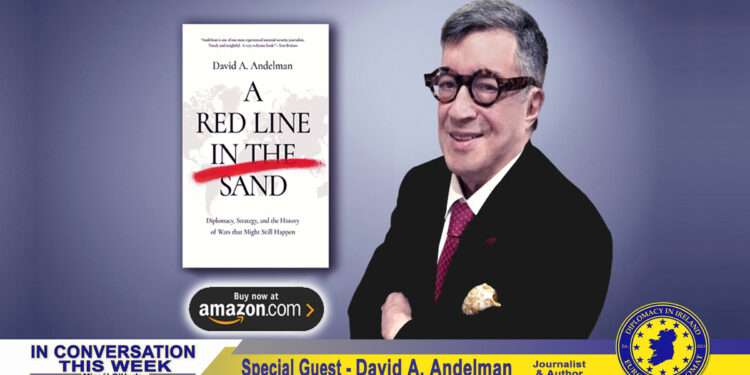 DUBLIN ― Veteran journalist and author, David A. Andelman, appeared on ‘In Conversation This Week with Miceál O’Hurley’ to discuss his latest book, A Red Line in the Sand: Diplomacy, Strategy, and the History of Wars That Might Still Happen (Pegasus – 2021).  Andelman, who recently joined Diplomacy in Ireland – European Diplomat as a Special Correspondent (much to our delight and that of our readers), is a longtime columnist for CNN and veteran correspondent for The New York Times and CBS News astutely combines history and global politics to help us better understand the exploding number of military, political, and diplomatic crises around the globe.

Andelman is a member of the Council on Foreign Relations.  In 2017, he was named a visiting scholar at the Center on National Security of Fordham Law School and director of The Red Lines Project.  From 2010 to 2012, Andelman served as President of the Overseas Press Club and leader of its Press Freedom Committee and The Silurians Press Club – the oldest club in America for veteran journalists.

On December 1, 2021, by decree of President Emmanuel Macron, Andelman was decorated with the rank of chevalier (knight) in France’s Légion d’Honneur, the French Republic’s highest civilian honour.

The riveting and illuminating behind-the-scenes stories of the world’s most intense “red lines,” from diplomatic and military challenges at particular turning points in history to the ones that set the tone of geopolitics today. More red lines exist in the world today than at any other single moment in history. Whether it was the red line in Munich that led to the start of the Second World War, to the red lines in the South China Sea, the Korean Peninsula, Syria and the Middle East.

Traversing the globe, Andelman uses original documentary research, previously classified material, interviews with key players, and reportage from more than 80 countries across 5-decades to help us understand the growth, the successes and frequent failures that have shaped our world today.

Andelman provides not just vivid historical context, but a political anatomy of these red lines.  How might their failures be prevented going forward? When and how can such lines in the sand help preserve peace rather than tempt conflict?

A Red Line in the Sand is a vital examination of our present and the future—where does diplomacy end and war begin? It is an object lesson of tantamount importance to every leader, diplomat, citizen, and voter. As America establishes more red lines than it has pledged to defend, every American should understand the volatile atmosphere and the existential stakes of the red web that encompasses the globe.

You can follow and Subscribe to his Substack – Andelman Unleashed, which is currently focused on the French elections.

One of Andelman’s previous books, A Shattered Peace: Versailles 1919 and the Price We Pay Today , (Wiley – 2014, 2nd Edition), Foreword by Sir Harold Evans is also highly recommended reading that belongs on any diplomat, politician or informed-reader’s shelf.  Andelman explores how, for more than half a century, it has been widely recognised that the Treaty of Versailles created the circumstances that led inevitably to World War II.  Less acknowledged and understood is the treaty’s profound impact on many other parts of the world ― an impact that echoes to this day in the Middle East, the Far East, the Balkans, and, yes, in Iraq.  In A Shattered Peace, veteran foreign correspondent David A. Andelman takes a fresh new look at the Treaty of Versailles as the point of origin for many of today’s most critical international issues.