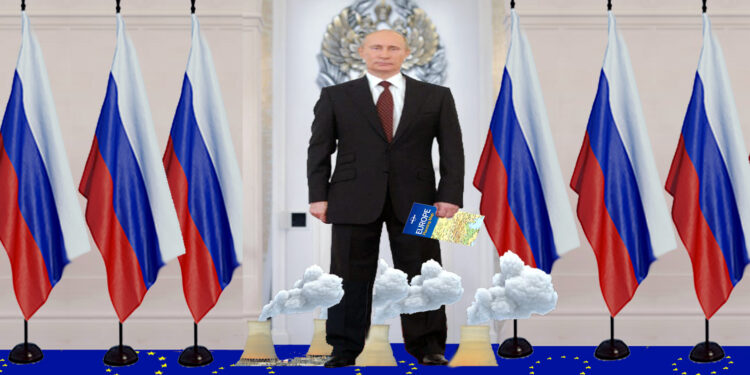 DUBLIN – Although not known to be a Chess aficionado, Russian Federation President Vladamir Putin has shown he remains the Grand Master of the European board.  His sheer audacity in creating crisis while remaining a necessary agent for its resolution has continued to keep him at the centre of European and world affairs, despite Russia’s growing isolation from the rules-based international community.  To date, Putin has been the beneficiary of his latest use of threat-of-force by exposing the political fault lines within Europe and its Transatlantic partners which has muted any military response for Ukraine.  While nobody in Europe has an appetite for conflict the political debate within Europe has resulted in even defensive weapons and ammunition being blocked for export to Ukraine, furthering any margins for victory which might be the fruit of military actions across the red line.  For Putin, having a functional democracy like Ukraine on its border that looks to the West for its future is anathema that cannot endue without undermining his authoritarian domestic rule and mismanaged kleptocracy of an economy.

Putin has been developing the European board for years.  In the last year alone, his opening gambit in unleashing a military build-up on Ukraine’s border in the Spring of 2021 proved a mere testing of his opponents.  Ultimately, the West clamoured for a reduction without any real action being taken.  Putin’s feign on Ukraine’s border, and the lack of strong response, allowed Putin to adjudge the West to be both divided and weak.  Consequently, the Kremlin announced a return-to-barracks without actually significantly reducing the troop presence which gave him a distinct advantage in repeating the process.

In his next move, Putin reduced gas supplies all across Europe.  On 21 November 2021, the Russian State energy company, Gazprom PJSC, threatened to turn-off gas supplies to Moldova entirely within 24-hours.  Unsurprisingly, Russia got what it wanted from Moldova (where Russian troops maintain their occupational stranglehold in the occupied Moldovan territory of Transnistria).  By the end of November, Russia’s supply of gas to Europe reached a 6-year low (corresponding to supply reduction owing to its 2014 invasion and of the Temporarily Occupied Territories (TOT) in Ukraine’s Crimea, Luhansk and Donetsk regions).  Russia currently supplies 47% of natural gas imports into the European Union (EU).  In Central and Eastern Europe, the share of imported gas from Russia can reach as high as 73%.  Massive underground gas storage facilities in various European countries, most particularly in Germany, give Russia inherent power to manipulate Europe’s energy supply at whim.

Years of poor decision-making by EU energy policy makers combined with mere lip-service to energy reduction measures in line with the Sustainable Development Goals (SDGs) have resulted in EU’s ‘energy junkie-dealer‘ relationship.  Today, Europe languishes in a virtual addict-dependent status.  Much like the junkie suffering from dependence, the EU has not show either real interest or effort in kicking its habit.  Putin’s energy threat gambit had the duel benefit to Russia of increasing gas costs at a benefit to the Russian economy while destabilising and intimidating Europe.

Why then would Putin reduce gas supplies to Europe at a time when the disastrous Russian economy is so dependent on the cash flow following the 2014 sanctions regimes imposed because of it’s invasion and temporary occupation of Donetsk, Luhansk and Crimea?  Simple, despite reduced sales the increased prices almost offset previous profits realisation.  Still, Putin has cut exports deeply.  It is paramount to observe that Putin’s willingness to forgo the usual Russian profiteering from the very price hikes they engineer signals a departure from previous exercises of this nature.  Despite the dire need for cash – Putin has goals bigger than rescuing Russia’s ramshackle economy – the first of which is consolidating his hold over as much of the former Soviet empire as possible.  Given his age, the languishing Russian economy, domestic political unrest and a world seeking to reduce its fossil fuel energy dependence, Putin knows he need to achieve as much of his goals as cheaply as possible while he is still in a position to do so.  Putin knows his fortunes are waning.

The energy gambit combined with the current massive invasion force Russia has marshalled along Ukraine’s border (extending it into Belarus in recent days) needs to be considered in the context of the European Green Deal.  With its stated goal of meeting certain carbon reduction goals by 2030, the European Green Deal would consequently result in a massive reduction of fossil fuel energy consumption from Russia.  Energy represents more than 50% of Russias Gross Domestic Product and an overwhelming share of its export revenues.  The EU Energy Policy Review 2020 by the International Energy Agency indicated that in excess of 75% of the EU’s energy comes from fossil fuels, with Russia providing the lion’s share of it.

Putin’s calculus is this:

Unsurprisingly, despite his relatively weak position, and the knowledge that a forceful response from Europe might bring down his regime, Putin realises that the factors militate towards him taking action while he can.  The alternative would be to forgo his goals of re-assembling what had been the Soviet ‘Sphere of Influence‘ which drove his latest demands on rolling back NATO to its 1997 levels and permanently excluding Ukraine.  Given that his essay last year publicly announced his view that the former Soviet Republics and Warsaw Pact members are inherently Russian or mere “territories” (an idea reiterated by Foreign Minister Lavrov only 2 weeks ago), if Putin doesn’t realilse a ‘big win‘ from his latest moves he will stand diminished on the world stage and worse – at home.

While advisedly avoiding beating the war drums, Europe is proving itself all too complacent to prevent the Ukrainian people and their free, independent and sovereign nation to be dismembered and destabilised by Russia.  How the EU put itself into this situation by believing Putin and his Russia would be reliable partner is a study in a death-by-a-thousand-cuts.  History should remind us how ill-advised it is to ignore what has been written large for all to see and understand.  Chamberlain was foolish enough to go to Munich and leave with a piece of paper promising “peace in our time“.  Stalin, who collaborated with Hitler to start World War II, seemed truly shocked when Hitler betrayed him.  Both men had read Mein Kampf.   Russia has equally writ large for the world to see it is obdurate in abiding by its international commitments and treaties, its words cannot be trusted and its appetite for aggression in Europe is voracious.  All of Europe has read the reports and newspapers detailing Putin and Russia’s renown for  poisonings, torture, imprisoning civil society activists, murdering journalists, conducting assassinations with impunity against its critics on European soil.  All of Europe’s leaders are acutely aware that Russia remains the only European nation to invade and occupy three of its neighbours since World War II.  Still, Russia having proved itself willing to reduce energy supplies to Europe, driving-up inflation and threatening domestic political stability in capitals across the continent, much to the dismay of the very European leaders and civil servants that reduced the continent to its energy-addict dependency making it incapable of giving action to its vaunted values.  Europe needs to detox its Russian energy dependence quickly.

Putin is presently threatening Europe’s bread-basket, Ukraine.  But to be abundantly clear – it is not Ukraine which is under threat – but the European way of life.  While Putin cannot abide a free and democratic Ukraine on his border today, if Ukraine is allowed to fall by force, or be destabilised and become dysfunctional, it is Poland, Hungary, Moldova, Romania, Slovakia, the Baltics and Russia’s Black Sea neighbours that will then become the intolerable democracies on Russia’s border.  It is Europe’s future that is at stake every bit as much as is Ukraine’s.

Now is the time in Europe for people of character to decide if they will be Chamberlains and Quislings or go down in history as DeGaulles or Roosevelts, willing to do what is necessary to preserve the European experiment in democracy and freedom.  If Ukraine is sacrificed and Russia placated in any way, the EU might as well declare its demise (a re-read of Gibbon’s Decline and Fall of the Roman Empire would be instructive reading at this point).  The current betrayal of Europe’s self-proclaimed values out of any desire to maintain its addiction to avoid discomfort or shared-sacrifice would be calamitous.   Europe’s demonstrated vice of aversion to sacrifice typifies the inwardly focused, increasingly nationalistic and selfish values that define this ‘mé féin‘ generation of political ambiguity on the continent.  If Ukraine is invaded (yet again), and not actually speedily restored to its internationally recognised borders, dictionaries will soon rightly re-define  ‘European Values‘ as being those ideas which are espoused but not embraced, being maintained at the expense of other’s freedom, values and identity.

Aside from warning us, “A nation or civilization that continues to produce soft-minded men purchases its own spiritual death on the installment plan,” Nobel Peace Prize Laureate, Dr. Martin Luther King, made abundantly clear the moral hazard in the sin of omission:

Clearly, the protest of words have fallen on deaf ears in Russia and the immediacy of resolution action remains all that will save us from self-inflicted demise.

It might be worth European community of nations remembering the adage, “While the present may shout, the future whispers“.  Europe must decide if it will continue cooperating in the pattern of evil that subsidises Russia’s domestic and world misconduct or become the embodiment of its rhetorical values and act to make real that which undergirds the European Union’s foundational principles.

If Europe is to earn its place as a noble and effective agent for peace, democracy and self-determination in the annals of history yet written, it must not tarry.

Veteran Journalist & Author David A. Andelman Discusses His Latest Book on 'In Conversation This Week'