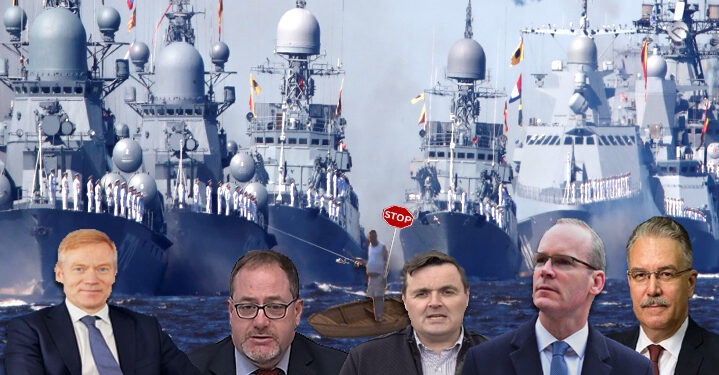 DUBLIN — The energetic and talented French Ambassador to Ireland, His Excellency Mr. Vincent Guérend (who was a guest on ‘In Conversation This Week’ on the 1st Anniversary of his arrival in Ireland) threw his weight behind the separate efforts of Ireland’s Foreign Affairs Minister Simon Coveney and the Irish fishing lobby and gave proof to the axiom, ‘When the mouse roars, the cat listens‘.

Russia, which announced last week that it was determined to carry-out live-fire naval exercises in the waters of the coastline of County Cork which comprise part of Ireland’s Exclusive Economic Zone (EEZ), exercises that were part of a larger demonstration of Russian’s worldwide naval reach coinciding with yet another invasion of Europe, in Ukraine, has backed-down.  This rare act of Russian bow to the strenuous requests of a foreign nation to avoid navigations and military exercises in international waters, activity not specifically prohibited by the United Nations Convention on the Law of the Sea (UNCLOS), was a demonstration of how bilateral, if not multilateral unity is a modality that still produces desirable results.

Although having been the instigator of the problems, the Russian Federation, through its Ambassador to Ireland, His Excellency Mr. Yuri Filatov defied expectations and worked multilaterally to help ensure Irish waters, its ecosystem, marine life and Irish beaches would not be effected.  Russia is proving, once again, that it remains capable and willing to listen to its international partners and cooperate when their mutual needs can be met.  It is equally worth noting that the intercession of the French Ambassador, Mr. Guérend, played a critical role in ensuring that Minister Coveney’s appeal to Russia to forgo using Ireland’s EEZ waters for the Russian Navy live fire exercises were moved elsewhere.

The seas on which the Russian Navy had selected to hold the exercises were almost equa-distance between Ireland and France.  Both nations, which have close cultural, economic and political ties which date back to over a millenia expressed their concern about the impact the exercises might have on the environment and the livelihoods of the Irish fishing industry which faces increased pressures on an annual basis (France is Ireland’s 2nd largest European trading partner).  Ireland’s fishing fleet, which was last estimated by the OECD as being comprised of some 1,4000 vessels, is responsible for sustaining some 11,000 people in jobs, from fishing to processesing and marketing.  The commercial fishing industry in Ireland is worth between some €800 million and €1.22 billion per annum (depending on source recording/reporting).  Irish fisheries produce not only for domestic consumption but to countries as far afield as the African continent, Japan and China.  More than 90% of Irish commercial fishing boats are skipper-owned and operated family fishing operations with approximately only 1/3rd of them being greater than 12 meters in length.

On Friday, Irish South and West Fish Producers’ Organisation (ISWFPO) Chief Executive Officer, Patrick Murphy; and, Brendan Byrne of the Irish Fish Processors and Exporters’ Association (IFPEA) met with Russia’s Ambassador in Dublin.  Following the meeting, pandemonium broke out when Murphy and Byrne gave interviews that resulted in the Irish Times reporting that they held a “successful and positive meeting” with Ambassador Filatov resulting in his giving them “… an absolute guarantee” that the fishing grounds withing Ireland’s EEZ that were specifically discussed in the meeting would not be impacted by the Russian Naval exercises.

Upon the release of the Irish Times report, Russian Embassy Spokesperson Nikita Isakin released a statement in which the Embassy claimed “There was no discussion of guarantees of any kind” given by Ambassador Filatov to Murphy and Byrne.  Byrne and Murphy responded by issuing a clarification that they had referred to two specific areas known as the ‘Porcupine Bank‘ and the ‘Porcupine Sea Bight‘ and not the entirety of Ireland’s EEZ.  Both fishing grounds lay North-Northwest of the area specifically designated by the Russian Federation for naval live-fire exercises in early February.  This confusion permeated Dublin Friday leaving the issue unsettled and without clarity.

On Saturday, at 1729hrs (GMT), Foreign Affairs Minister Simon Coveney released a Tweet from his personal Twitter account in which he announced his diplomatic initiative to see the Russian Navy exercises mooved outside of Ireland’s EEZ had been agreed by his counterpart in the Kremlin, General Sergey Shoygu.  Coveney serves in the dual roles of Minister for Foreign Affairs and Minister for Defense.  According to the Tweet, Coveney wrote, “This week I wrote to my counterpart, the Minister of Defence of Russia, to request a reconsideration of naval exercises off the Irish coast.  This evening I received a letter confirming the Russian exercises will be relocated outside of Ireland’s EEZ. I welcome this response.”

Although at times a fierce critic of the Russian Federation, Diplomacy in Ireland – European Diplomat is not beyond citing and celebrating their willingness, at times, to engage with others in the European community to reach accord.  If Ireland’s fisheries, marine life and coastlines have escaped a repeat of the 2009 oil spill disaster that marked previous naval live-fire exercises it is do to the diplomatic collaboration of  Ireland’s Simon Coveney; France’s Vincent Guérend; and, the Russian Federation’s Yuri Filatov.  At a critical time, these three seasoned diplomats have given a large measure of confidence that despite the ongoing tensions in Europe, multilateral relations and good-faith negotiations remain at the core of maintaining peace and security in Europe.

The Question Isn't Does Putin Have the Power to Take Ukraine But Has Europe Forfeited Its Power to Him?