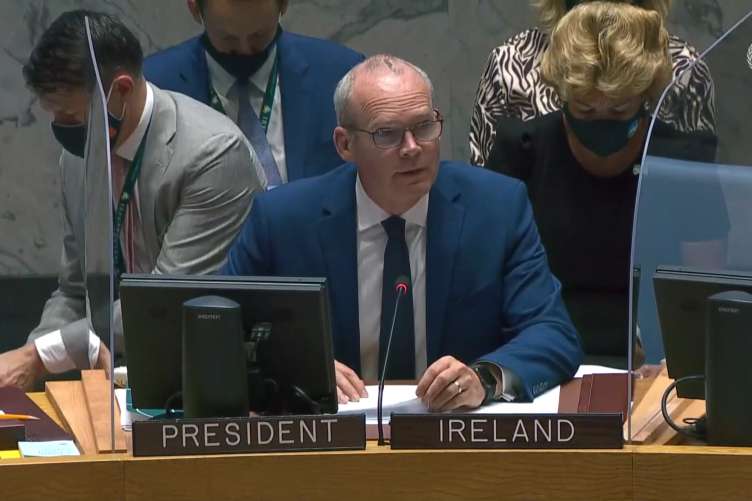 UNITED NATIONS – On 1 September, Ireland began its Presidency of the United Nations Security Council (UNSC) for the month of September.  The President of the UNSC is expected to manage the programme of Council business and chair the Council’s meetings.   This is th only time Ireland will hold the Presidency during its two-year UNSC term (2021-2022).

Expected Programme for September
The timing could not be more crucial.  With the collapse of the Government in Afghanistan in August, leaving hundreds of foreign citizens in Afghanistan who were unable to depart before the Taliban’s 31 August deadline, the stakes are unusually high.  Without a recognised Government in Afghanistan, and with millions of Afghans already living well below the poverty level, experiencing higher-than-normal food insecurity, Afghanistan is at risk of slipping into an incredible aid morass.  The ability for aid actors to operate with humanitarian space is almost non-existent under current conditions.  The UNSC will meet this month for the quarterly debate on the UN Assistance Mission in Afghanistan (UNAMA) and the renewal of the UNAMA mandate.

Georgia is also on the UNSC radar in September.  On 4 August, Ireland had joined Estonia, France, Norway, the UK, and the US. Assistant Secretary-General for Europe, Central Asia to raise the issue of the 13th Anniversary of the 2008 Russian invasion of Georgia.  Incoming Council member Albania delivered a joint statement following the meeting reaffirming their support for Georgia’s sovereignty and territorial integrity, and condemning Russia’s military presence in Abkhazia and the Tskhinvali Region/South Ossetia.  The issue may well arise again in September.

Ireland will also convene a briefing on peace and security issues with members of The Elders, a non-governmental organisation of distinguished public figures founded by Nelson Mandela that strives to promote human rights and peace.  Mary Robinson, who chairs The Elders and is the former President of Ireland (1990-1997) and UN High Commissioner for Human Rights (1997-2002), and Lakhdar Brahimi, an emeritus member of The Elders who is the former Algerian foreign minister (1991-1993) and a veteran UN diplomat—are expected to brief.  It appears that the meeting is intended to provide an opportunity for members of The Elders to share their views on several issues that the Council is grappling with, including Afghanistan, Ethiopia (Tigray), Myanmar, and climate change and security, among others.

The Security Council will hold its annual debate on peacekeeping reform pursuant to resolution 2378 of 20 September 2017.  The Irish Presidency plans to hold the meeting at ministerial level with a particular focus on peacekeeping transitions.  Ireland’s Minister for Foreign Affairs and Minister for Defence, Simon Coveney, is expected to Chair the debate.  Secretary-General António Guterres, former President of Liberia Ellen Johnson Sirleaf, and a civil society representative are the anticipated briefers.

The UNSC is also expected to renew the mandate of the UN Investigative Team to Promote Accountability for Crimes Committed by Da’esh/ISIL (UNITAD), which expires on 18 September.

“Non-Proliferation” is also on the UNSC agenda as a briefing item to mark the 25th anniversary of the opening for signature of the Comprehensive Nuclear-Test-Ban Treaty (CTBT). Briefings are expected from Executive Secretary of the Comprehensive Nuclear-Test-Ban Treaty Organization (CTBTO) Robert Floyd, UN High Representative for Disarmament Affairs Izumi Nakamitsu, and a member of the CTBTO Youth Group.

The critical issue of Climate Change will also be a priority for the UNSC in September.  In September, Ireland plans to host an open debate on climate change and security.  Secretary-General António Guterres is expected to brief.  A civil society representative may brief as well.   The UNSC focus on the adverse effects of climate change on various country-and region-specific agenda items has continued in 2021.  So far this year, climate change has been referenced in resolutions on Cyprus, West Africa, South Sudan, Somalia, Iraq, Sudan, and Mali. Resolutions 2561 and 2587 on Cyprus and 2576 on Iraq marked the first case in which the Council recognised the effects of climate change in non-African contexts.

Taoiseach to Chair Critical Climate Change Meeting
An Taoiseach, Micheál Martin spoke about Ireland’s role in Presiding at the UNSC:

“As President of the Security Council, we will be dealing with some of the key immediate challenges facing the international community, including the evolving situation in Afghanistan, and an ongoing concerning situation in the Middle East.

“We sought a seat on the UN Security Council to make a difference; to bring a principled, constructive and open approach to its vital work of promoting international peace and security, including at critical and challenging times such as this.

“I look forward also to chairing a meeting of the Security Council on 23 September on the critical issue of Climate and Security. The effects of climate change are a contributory factor in a range of the crises on the Council’s agenda.

“As leaders we need to recognise this, and to explore what tangible actions can be taken to address these factors specifically in our work.”

On 8 September, Minister Simon Coveney Chaired a meeting on Afghanistan at the UNSC.  The UNSC voted to approve a resolution on peacekeeping brought forward by Ireland.  The resolution focuses on transitioning from UN peace missions to a UN civilian presence that supports peacebuilding in post-conflict environments.

After the meeting, Minister Coveney spoke at an event hosted by the International Peace Institute (IPI) Global Leaders Series.

This Global Leaders Series event focused on Ireland’s foreign policy commitments to peacekeeping and peacebuilding, which are priorities of its Security Council term. Ireland’s experiences of building peace on the island of Ireland, its 62-year commitment as a UN troop-contributing country, and the experiences of Irish peacekeepers and police serving in transition contexts such as Liberia, Haiti, and Côte D’Ivoire, give the government of Ireland particular insight into these issues.  This Global Leaders Series followed a UNSC open debate on UN peacekeeping transitions the previous day.  The event was moderated by Ms. Karin Landgren, Executive Director of Security Council Report.  Dr. Adam Lupel, Vice President and COO of IPI, provided opening remarks.