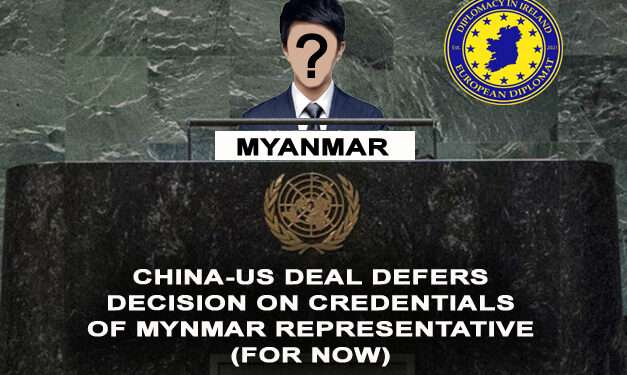 UNITED NATIONS – When on 9 September China’s President Xi and United States President Biden spoke for the first time in months, President Xi address the heart of all that is staked on bilateral cooperation between the two global giants, “The world’s destiny depends on whether China and the U.S. can manage their relations well.  Bilateral cooperation would benefit the world; confrontation would bring disasters.”  This was obvious.  However, in his next 21 words, President Xi pointed to the true difficulty that only statecraft and diplomacy could solve, “The U.S.-China relationship is not a multiple-answer question of whether we should have good relations, but a compulsory question of how.”  Why was obvious.  How remains unknown.  With Myanmar, we may have a glimpse.

The move, while not an outright rejection of the potential for Myanmar’s military regime to be recognised in the future, thwarts the junta’s quest for international legitimacy.  Myanmar (formerly known as Burma), with a population of some 54 million, achieved Independence from Britain in 1948 only to fall under military rule until 2011.  The civilian government’s rule was brought to an abrupt end earlier this year.  On 1 February, the military’s coup d’état ended democratic, civilian government following the landslide victory of Ms. Suu Kyi’s National League for Democracy (NLD) party.  The military claimed “widespread voter fraud” necessitating their seizure of power.  There has been no credible evidence of voter fraud produced to date.

The Mynamar Tatmadaw (military) Commander-in-Chief, Min Aung Hlaing, took power.  Min has long remained a political force in Myanmar despite the country’s democratic progress between 2011-2021.  The military regime was universally condemned for the coup d’état.  Seeking to forge a vaneer of legitimacy, Min promised “… free and fair elections when the state of emergency is over.”  To date, the military has continued to engage in a brutal crackdown of civilians opposed to their regime and failed to announce the date of any elections.

The democratically elected parties in Myanmar have formed a ‘National Unity Government (NUG)’ which continues to claim to be the legitimate government of Myanmar.

International condemnation of the Tatmadaw regime has been significant.  United States Secretary of State Anthony Blinken accused the regime of administering a “reign of terror.”

The European Union, the United Kingdom and the United States banded together to impose sanctions on Mynmar Tatmadaw leaders.

Although China blocked a United Nations Security Council statement condemning the coup d’état, they have supported demands for the release of the democratically elected Ms. Suu Kyi and a return to a state of democratic normality.  Historically, China has stood opposed to international intervention in Myanmar.  Their collaboration in thwarting the Tatmadaw from addressing the United Nations General Assembly demonstrates practical statecraft but is unlikely to mark a departure from their historic stance of keeping the international community from overly involving itself in Myanmar.

The opinion was signed by legal experts no less prestigious as Mr. Richard Goldstone, the founding chief prosecutor of the United Nations international criminal tribunals for the former Yugoslavia and Rwanda, Chris Sidoti, a member of the special advisory council for Myanmar, Yuyun Wahyuningrum, the Representative of Indonesia to the Asean Intergovernmental Commission on Human Rights, and Dr. Sriprapha Petcharamesree, the previous Thai Representative to the Asean Commission.

Military’s Quest for Legitimacy at UN Thwarted (for now)

The deal brokered by China and the United States is a serious blow to the Tatmadaw regime’s hopes to be recognised on the world stage.

However, the deal, carefully crafted by weeks of behind-the-scenes diplomacy, will require His Excellency Mr. Myaw Moe Tun, Myanmar’s Permanent Representative to the United Nations who has heroically refused to relinquish his seat despite the coup d’état, to refrain from inflammatory rhetoric at the United Nations General Assembly this week.  His Excellency Mr. Myaw has been heatedly vocal in condemning the Tatmadaw regime.  In the aftermath of the military takeover on 1 February he has continued to refuse to resign or relinquish his post as the Permanent Representative of Myanmar to the United Nations to which he was appointed by the civilian government prior to the coup d’état.

There is arguably a lack of certainty about the approval of Permanent Representatives to the United Nations where there is a domestic dispute over the legitimacy of a government.  Past instances have seen the United Nations Credential Panel consider key factors, including “effective territorial control, democratic legitimacy and respect for international human rights standards.”

The official criteria for approving envoys is vague, but various factors have been considered in past cases – including “effective territorial control, democratic legitimacy and respect for international human rights standards.”  Effective territorial control is in no way dispositive as it would reward bad-actor States that invade and occupy their neighbours as well as those who seize effective control of their domestic State by use of arms.  In any event, the continuing conflict in Myanmar indicates that neither the NUG or the Tatmadaw regime have effective territorial control of Myanmar.  As for democratic legitimacy, the military has almost no case to make absent sufficient proofs of the widespread voter fraud they say prompted the coup d’état.  When it comes to respect for international human rights standards, here, the picture for both is dismal.  The NUG’s component parties were either complicit or silent when Myanmar engaged in horrific killing, persecution and ill-treatment of the Rohingya people.  Some have called it a genocide.  The military’s history of almost unceasing brutal repression since 1948 reads like a catalogue of horrors that would have made Torquemada smile.  No doubt, other factors will be considered and the panel is seemingly able to devise its own standards and criteria for making its determinations.

The Next 90 Days Will be Telling
The China-US brokered deal will see any decision on the credentialing of any new Myanmar Representative deferred until at least November.  This will maintain Ambassador Myaw in his post as Myanmar’s Ambassador to the United Nations until at least then.  However, it does leave critical time for the Tatmadaw regime to lobby United Nations delegations during the interregnum and make their case to be recognised as the legitimate government of Myanmar.  The stakes are high.

Prospects for China-US Deal are High
Diplomacyireland.eu sources inside the United Nations Security Council (which is this month being Presided over by Ireland), have indicated that key blocs will support the measure.  The arrangement, while not formally binding, will see key support from the European Union, the Association of Southeast Asian Nations and the Russian Federation.  With the support of these blocs and civil society NGOs who have largely signaled they will acquiesce to the deal without rancor, the deal may become operative, buying time for all to make their case and come to determinations about who will represent Myanmar on the world stage.