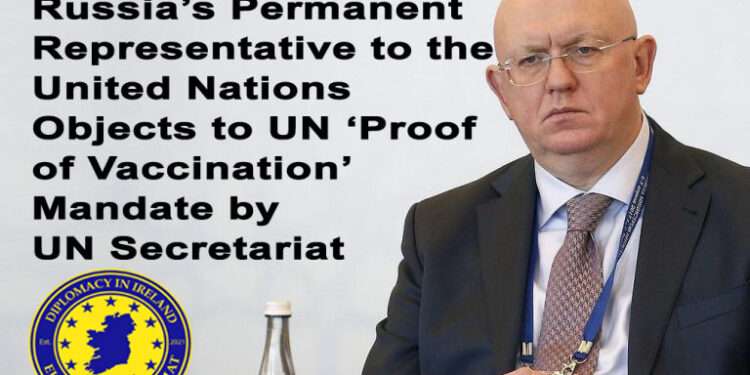 UNITED NATIONS – Beginning immediately, all diplomats and staff working at the United Nations Headquarters in New York, and diplomats attending the UN General Assembly, are required to provide proof of vaccination before entering UN buildings.

In a letter dated 9 September 2021, New York City Mayor Bill DiBlasio informed the United Nations Secretariat that delegates must be vaccinated in order to enter the debate hall.  The letter additionally outlined requirements, consistent with New York City regulations, that UN personnel, including diplomats, must have received an “approved” vaccine if they want to use exercise facilities indoors at the UN, use dining facilities, engage in various indoor activities or entertainment venues.  The letter, signed by the New York City Commissioner of Health, indicated the UN debate hall was classified as a ‘convention center’, meaning all attendees must be vaccinated as per local Covid-19 prevention regulations.

Mayor DiBlasio informed a press conference last week that he had been working closely with UN Secretary General António Guterres to ensure uniformity of New York’s regulations and Covid-19 protection protocols with those of the UN.  While enjoying diplomatic autonomy, the UN has agreed to many of the Mayor’s requests, bringing Covid-19 protection at the UN in-line with those of New York City.

The decision by the UN Secretariat raised the ire of the Russian Federation Delegation.  Decrying the requirement to show proof of approved vaccination prior to entering the debate hall, dining, drinking, exercising or engaging in activities on the UN campus, as well as do the same in New York City, Russia’s Permanent Representative to the UN, His Excellency Mr. Vassily Nebenzia complained by letter to UN Assembly President Abdulla Shahid.

His Excellency Mr. Nebenzia’s letter complained that he was “…very much surprised and disappointed” by Assembly President Shahid’s letter to members in which he supported the New York mandate to provide proof of acceptable vaccination certificate at the UN campus.  “We strongly object that only people with a proof of vaccination should be admitted to the GA hall,” His Excellency Mr. Nebenzia wrote.  Ambassador Nebenzia cites the mandate as a violation of the 1947 agreement between the United Nations and the United States on the UN headquarters.  He also claims the requirement violates the UN Charter, stating that preventing delegates to access the hall was a “clear violation of the UN charter.”

Ambassador Nebenzia described the mandate’s requirement for only “approved vaccines” to be accepted as “a clearly discriminatory measure.”  Russia’s Sputnik V vaccine is not on the approved list of vaccines, leading the Russian Permanent Representative to claim the entire mandate was targeted specifically at Russia.

According to a spokesperson for the Office of the Mayor, New York City accepts all vaccines that have been approved by either the World Health Organization or the United States Food and Drug Administration as acceptable proof.  The World Health Organisation is currently reviewing the Sputnik V vaccine but has yet to reach a conclusion about its acceptability.

The Office of the Mayor denies the agreement reached with the UN Secretariat was in any way political or targeted at any nation, but was a reasonable measure during a public health emergency.  Mayor DiBlasio has made known to the Russian Permanent Representative, His Excellency Mr. Nebenzia, that he or others within the UN family who do not currently have proof of vaccination with an approved vaccine can avail of one, free of charge, in New York City.

By and large, diplomats and staff at the United Nations have acted with a sense of camaraderie over the mandate, acknowledging both publicly and privately that exempting the UN from local Covid-19 health regulations, with its thousands of members surging through the City of New York, was a danger to all, including diplomats and staff at the UN and was therefore an unnecessary risk.

Tuesday marks the beginning of the 76th Session of the UN General Assembly.  The session will be concluded the following Monday.  While the 75th Session took place in an entirely virtual format owing to the Covid-19 pandemic, this year’s Session will be a combination of in-person and remote access participation.