His Excellency Mr. Vincent Guérend on ‘In Conversation with Miceal O’Hurley’ 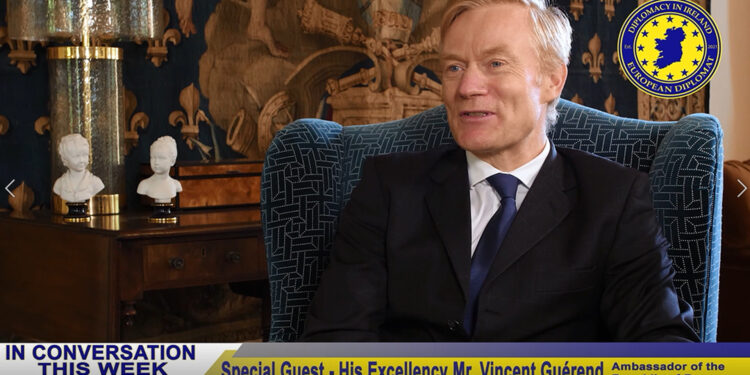 BALLSBRIDGE (RESIDENCE OF THE AMBASSADOR OF FRANCE) – When President Macron appointed the new Ambassador of the Republic of France to Ireland, nobody expected His Excelleny Mr. Vincent Guérend to arrive by ferry one year ago to the date of our interview, 5 October.  The very act of choosing to take up his posting by sailing the traditional route between France and Ireland demonstrated Ambassador Guérend’s commitment to green transportation as part of France’s driving commitment to tackle climate change and to demonstrate quite clearly that France is Ireland’s closest neighbour in the European Union.  This was no mere ploy, but a practical demonstration of the shared values of both France and Ireland to address the climate change that has caused severe weather events that effect all humanity as well as the geographical closeness of our two nations that is also reflected in our bilateral relations.

On the one-year anniversary of arriving in Ireland (albeit in the midst of the Covid-19 pandemic) Ambassador Guérend invited me into the French Ambassador’s Residence in Ballsbridge, Dublin for a wide-ranging discussion of the topics of the day.   I had the opportunity to explore everything the from thousands of French women and men living, working and studying in Ireland as well as the historical cultural ties which His Excellency rightly points out date to the Celtic expansion across France, Ireland and the British Isles in pre-history.

Given the times, I took the chance to explore the cause and effects of the recent announcement by the United States that it had reached a deal with Australia and the United Kingdom on the transfer of nuclear submarine technology and security strategy in Asia, an unexpected event which not only disrupted a long-standing French-Australian submarine construction deal, but was announced on the very day Europe announced new policy initiatives in South Asia.  His Excellency was blunt in his criticism and concern and pragmatic in his recognition that the United States pivot to Asia would have been better served by working with its European friends, not the least of which is France whose long history in the region, more than 1.5 million citizens who live and work there and its significant military presence gives it special insight into the region which the Americans lack.  I asked His Excellency Mr. Guérend about the future of the long-standing US-French-Irish triad and his response demonstrated a keen understanding of international relations matched with the practicality of a practitioner of diplomacy.

Effusively kind, exceptionally well educated, with a remarkable insight into Irish culture and history, soft spoken yet careful in his words, Ambassador Guérend was rightfully proud of the Governments of France and Ireland achieving a new Joint Plan of Action.  The achievement is quite remarkable and deserves not only our attention, but our applause given that it was achieved during a pandemic in which His Excellency’s first dealings with his own staff were restricted to online communications.  The ability to forge such a robust understanding between France and Ireland, which includes everything from Ireland enhancing its diplomatic staffing in both Paris and with the appointment of a new Honorary Consul in France, as well as addressing new joint-degree programmes with Irish institutions of higher learning (beyond the 45 that already exist), promote language exchanges and training, enhance the already significant Erasmus Programme exchanges, commit to greater cultural, economic, technology and commerce initiatives, as well as cooperating on the Celtic Interconnector and climate change is nothing short of a most impressive diplomatic achievement on the part of the French and Irish Governments and their Ministries for Foreign Affairs.

You can watch the entire, extended interview by Miceal O’Hurley with His Excellency Mr. Vincent Guérend, the Ambassador of the Republic of France to Ireland below:

We Salute Poland On Your Independence Day!