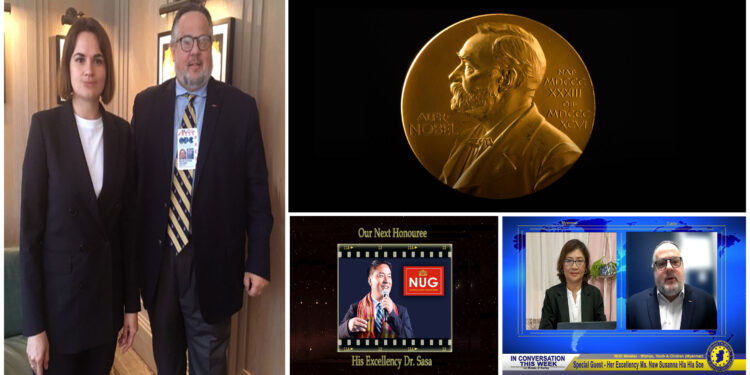 STOCKHOLM — Belarus’ rightfully elected President, Sviatlana Tsikhanouskaya, whom I interviewed in 2021 during her visit to Dublin, and to whom the Diplomacy in Ireland – European Diplomat Awards Committee conferred the Eleanor Roosevelt Four Freedoms Award and Diplomatic Service Medal with Valour in December, have reportedly been Nominated for the Nobel Peace Prize by Norwegian lawmakers.  Norway’s nominations have historically proven themselves uncannily accurate predictors of recipients.   The Nobel Prizes are all conferred in Stockholm, Sweden, with the exception of the Nobel Peace Prize which is conferred in Norway.  According to the Prize Committee, the release of Nominees and Nominators are embargoed for 50-years.  It is not uncommon, however, for Nominators to leak information to the media in advance of the official award announcement by the Committee naming the person or organisation determined by them to be the Peace Prize recipient.

According to the Henrik Urdal, Director of the Peace Research Institute of Oslo (PRIO), Tsikhanouskaya is the favoured Nominee by Nobel Prize watchers.  “[Tsikhanouskaya] has played a leading role in non-violently challenging (usurper-President Alexander) Lukashenko and the Belarusian authorities, calling both for fair elections and an end to violence against those demonstrating against the abuses of the current regime,” said Urdal.

Myanmar’s National Unity Government (NUG) which is the shadow-government successor to the democratically elected Parliament of Myanmar which was dismissed by the Tatmadaw military Junta which seized the country by force one-year ago yesterday, is also reported to have been Nominated for the Peace Prize.  The Tatmadaw junta continues in a brutal suppression of democracy achieved by an ongoing litany of human rights violations against its own people.

According to Oksana Shadrina, Awards Committee Chairperson for the Diplomacy Awards – 2021, “Of course, we are thrilled for the two Nominees. Their good works and commitment to peace are well known by our publication. We have interviewed them personally and have taken Editorial positions to champion their causes.  That our award recipients are now Nobel Peace Prize nominees gives us comfort in knowing we have the pulse of the world.  The merit is truly all theirs“.

Others have speculated that other Nominees may be:

Nominations do not imply endorsement by the Nobel Prize Award Committee.  Many of the aforementioned people and/or organisations mentioned have appeared on the speculative list perennially.

The Nobel Prize is a vaunted recognition of consensus of issues of importance.  Those who receive the honour often signal the tone of international politics for the future, some lasting decades.

In his Last Will and Testament, which was approved in April 1897 (following his death in 1895), Alfred Nobel, who endowed the Nobel prizes with by the bequeathal of some 94% of his total assets (then valued at 31 million SEK, c. €173 million in 2018, or US $201 million,) established five Nobel Prizes.  Nobel’s Executors, Ragnar Sohlman and Rudolf Lilljequist, formed the Nobel Foundation to take manage the charitable gift and organise the awarding of prizes in Stockholm.  Nobel’s  gave instructions, however, named a Norwegian Nobel Committee to award the Peace Prize, the members of whom were appointed shortly after the will was approved in April 1897.  At the time of Nobel’s death, Sweden and Norway were joined in a Union which was dissolved in 1905.