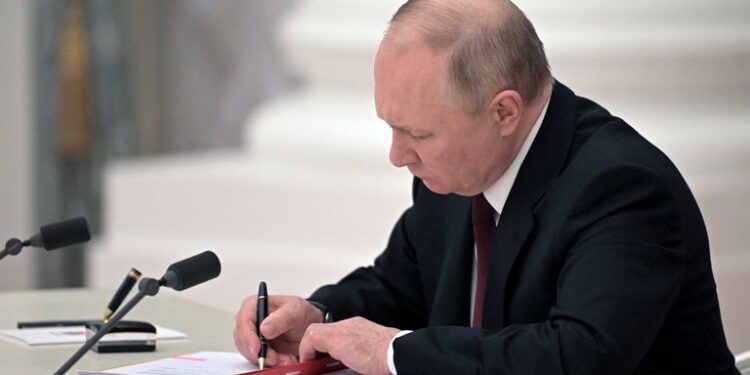 DUBLIN — Russian Federation President Vladamir Putin’s signing the instrument of recognition of the illegal regimes occupying Ukraine’s Luhansk and Donetsk has finally deprived Russian apologists of the ability to claim that it is the West that is provoking war.  This clear renunciation of Russia’s commitments signed under the Minsk Agreements once again underscores that Putin’s word is meaningless and it was not the potentiality of Ukraine’s membership in NATO that was at issue – but the existential question about Ukraine’s freedom and independence as a sovereign nation.

Rejecting over a millennia of recorded history, which includes the fact that Ukraine had bilateral relations with the Byzantine Empire at least 3-centuries before Moscow was even mentioned in history (and then as only a collection of “huts” alongside the river), Putin claimed in his televised address, “We have every reason to say it’s Bolsheviks and Vladimir Lenin that created Ukraine,” Putin declared, arguing that “modern Ukraine was completely created by Russia.”

Diplomacy in Ireland – European Diplomat has reported repeatedly on the true basis of Putin engineering the current conflict over Ukraine – his imperial conquests.  From his biography to last summer’s vitriolic screed about how Russia is entitled to rebuild the former Soviet Union, Putin has held out his almost mystical and religious belief that he has been ‘ordained‘ to fulfill both his and Russia’s destiny which he holds to be the reunification of what had been the Russian then Soviet empires.

Those who have acted as Russian apologists, blaming the West and NATO for allegedly “advancing” on Russia’s borders must surely now admit the truth – as Putin made abundantly clear – it has always been about Ukraine’s very existence.

Over the past months Putin has humiliated a string of European leaders who flew to Moscow to pay homage to Putin in the futile attempt to engage in horse-trading to avert a war that put Ukraine’s very existence at stake.  Those who debased themselves by returning from Moscow with the belief that Russia had given them guarantees or reason to hope that a deal could be done over Ukraine’s NATO ambitions must now be held accountable for their misunderstanding of the situation.  They could be forgiven except that as much as Hitler’s Mein Kampf made clear his territorial ambitions, Putin himself clearly articulated his territorial ambitions in his essay, ”On the Historical Unity of Russians and Ukrainians“.  Foreign Minister Sergey Lavrov reiterated the point in January when he referred to the former Soviet Republics in the Baltics and Warsaw Pact countries like Poland not as sovereign States, but Russian “orphans“.

The time for genuine and measurable solidarity is now upon Europe.  Germany must finally get on the right-side-of-history and announce that in light of Russia’s recognition of the puppet regimes in Luhansk and Donetsk (clear violations of international law) that Nord Stream 2 is dead-in-the-water.  Germany must also lift its prohibition against German-made munitions and military equipment sold to other nations being restricted from being sent to Ukraine for its necessary defense.  Every European Parliament should, as a matter of extreme urgency, pass Resolutions condemning Russia’s aggression against Ukraine and reaffirm their commitment to aid Ukraine in every practical manner.  The withholding of sanctions no longer makes sense and the most severe sanctions should be imposed with immediate effect – including cutting Russia off from the SWIFT banking system – despite the pain it will cause across the world.  Sharing a financial burden now, as opposed to absorbing the financial impact of Putin wiping a sovereign nation from the face of the Earth and forcing the world to foot the bill for the millions of refugees that he will create in Europe is a small and manageable price to pay.

Finally, the United Nations must call upon Russia to prove that it should continue to have a seat on the UN Security Council.  Russia’s status as a “continuator” of the Soviet Union has long been known to be a ruse without factual basis that would bind the United Nations.  Depriving Russia of its Veto power that protects its wrong doing is a long-overdue act rooted in the rule of law and the interest of justice.

All of this is in addition to the message that it sends to the world.  For Kim Jong Un and Iran it reinforces the idea that building and retaining a nuclear arsenal is the only real way to insulate yourself from attack.  For China, restricting freedom of navigation and the seizure of foreign territory now become norms.  For rogue regimes that are arising with regularity the message is clear – force is more important than collegiality and the rule of law.  And for the West – the triumph of force over freedom is an ominous sign.

Europe must now move expediently to start to source gas and energy resources elsewhere.  Azerbaijan comes to mind as a supplier capable of meeting much of the near-term need.  Of course, this will mean the EU must finally stop holding Georgia at arms-length and face the reality that deferring making the EU more inclusive has only served to make it more vulnerable.

If Ukraine is allowed to fall, the West must resolve that it played no small part in allowing it to happen by pursuing a policy of placation with Russia for these past 22-years and deferring energy diversification and independence to the point where a proud, sovereign, independent and ancient nation may be wiped-off-the-map because of the enduring arrogance that Putin was a rational actor capable of being a reliable partner.

It is not too late, however, to give Ukraine every possible assistance in defending itself from the coming storm.  It is the least the West can do after failing to truly stand firm on its values.