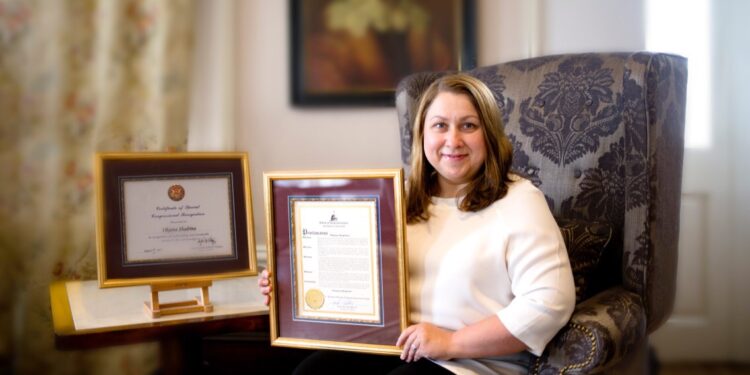 CORK — Oksana Shadrina, the Diplomacy in Ireland – European Diplomat Awards Committee Chairperson, was a guest of Cork’s 96FM this morning to discuss the current situation in Ukraine.  Oksana, a native of Kryvyi Rhi in the Dniepropetrovsk Region of Ukraine, a graduate of Taras Shevchenko University in Kyiv (widely recognised as Ukraine’s ‘most prestigious university‘) spoke with host PJ Coogan about the fluid situation in Ukraine caused by Russia’s unwarranted and un-provoked build-up of the largest military invasion force fielded since World War II.

Noting that more than 14,000 Ukrainians have already been killed by Russia’s 2014 invasions and occupations in Ukraine’s Crimea, Luhansk and Donetsk regions, and more than 30,000 wounded, Oksana added that the 1.5 million internally displaced Ukrainians places it as Europe’s largest displaced person, refugee and evacuee crisis since the aftermath of Russia and Nazi Germany signing the Ribbentrop-Molotov Pact which started World War II.  The Pact, in which Stalin and Hitler secretly decided to join forces to divide Europe between themselves, began with a false-flag operation staged to make it look as though Poland was the aggressor.

The same tactic is being deployed today, despite journalists and media outlets such as CNN exposing how Russia has produced videos claiming they are being attacked all while the metadata embedded in the videos clearly shows them to have been pre-recorded days before. In a clumsy and un-convincing media release, a jeep parked near the headquarters of Russian dissidents controlling part of Ukraine’s Luhansk region was shown destroyed accompanied by Russia claims it was blown-up by Ukrainians.  Despite being the parking lot of a regional government centre in which multiple journalists verified the presence of many video cameras that monitored the cark park, Russian forces controlling the region have failed to produce the actual explosion or show Ukrainian involvement in the jeep’s destruction.  Russia has also released highly dubious videos blaming Polish troops for conducting sabotage operations.  The video captures the exact moment of the explosion meaning the videographer is either clairvoyant or the luckiest journalist in history.  The staging of Gleiwitz style false-flag operations was forecasted by Western intelligence sources almost 2-weeks ago.

Although dismissed by Russia as American “hysteria,” Russia’s attempts to pass-off crisis-warning videos calling for the evacuation of civilians from Russian occupied Ukrainian territory as authentic have been found to be hoaxes, created days in advance.  Such actions give credence that Western intelligence has penetrated Russian security and military echelons and are accurately countering Russian denials with advance notice of their planned disinformation campaigns to provide a justification for war.

Oksana also spoke of her fears for her sister who attends university in the large industrial centre of Dnipro (formerly Dnipropetrovsk).  The city straddles the Dnipre River by East and West banks and is located within striking distance of the temporarily Russian occupied territories of Luhansk and Donetsk.  Defense and Security Analysts have projected that Dnipro may be a major target for Russian forces should they invade.  Even from Russian occupied territories of Ukraine, Russia is capable of striking the city and its 1.2 million inhabitants.   Asked by PJ Coogan where her sister might find refuge, Oksana explained that given the enormity of the Russian invasion force that have left their cantonment areas and are deployed along the tree lines on Ukraine’s border, all of Ukraine is at risk of being overrun and her sister faces the same dilemma all of Ukraine’s  47.3 million civilians face — total uncertainty.

According to Oksana, “Instead of concentrating on her studies or enjoying time with her friends, my sister, who was orphaned and is only 20-years of age, must worry about where she can find space in a bomb shelter, where might be safe to evacuate or what future she might have under Russian occupation,”.

Oksana lives in Youghal, Co. Cork.  She was officially granted Refugee status by the International Protection Appeals Tribunal based upon claims and verified investigations owing to Russia’s 2014 invasion and occupation of Ukraine.   Less than one-half-of-one-percent of all asylum seekers are granted Refugee status.  Although previously an executive with Vodafone Ukraine, Oksana was barred from working during the process of determining her asylum claim according to Ireland’s rules.  “I am deeply concerned that Russia’s threat to Ukraine will create a wave of refugees in Europe that will also find obstacles to staring life anew should Russia invade Ukraine yet again,” said Oksana.  “All of Europe risks being destabilised because of Russia’s illegal conduct,” she added.  “Of course, this is what Putin wants – to undermine democracies like Ukraine and destabilise all of Europe“, according to Oksana.  “This has never been about Ukraine posing a threat by wanting to join NATO.  Poland and the Baltics also border Russia and he didn’t threaten war when they joined.  This is about Ukraine coming into its maturity as a functional democratic society, freed from Russian influence and desiring to rejoin the European family Russia cut-it-off from with its occupations and invasions,” she said.  “We have been Europeans for over 1,000-years, long before many modern European States were even dreamed-of and Putin feels threatened at our growing success because just across the border the Russian people he has driven into poverty, deprived of human rights and controls with the heavy-hand of a Stalinist authoritarian see our progress and this risks highlighting his failures as a supposed ‘leader’ and undermining his grip on power,” said Oksana.

As for claims of Ukrainians violating the rights of Russian speakers, Oksana was forcefully clear.  “My last name is Shadrina.  That is a Russian name.  Although I was raised by my parents to be proud of my Ukrainian heritage, of course I spoke Russian but Ukrainian is my native language.  The Russian influence on Ukraine is as undeniable as the English influence was on Ireland.  That is what happens with long periods of occupation” she said.  “But any claims that Russian-speakers and those who identify as ethnic-Russians were persecuted is simply fantasy,” said Oksana.  “Russian was widely spoken in Ukraine, and pro-Russian politicians had significant support in Ukraine – that is until Russia invaded in 2014,” she added.  “If anything, Putin is himself responsible for uniting Ukrainians.  Russia’s partition of our nation has caused the Russian language to fall into disfavour – not government policy.  Putin made patriots out of pacifists.  Ukrainians who were once un-bothered by being confused with being Russian finally became determined to firmly identify as Ukrainian so not to be associated with Russia’s murders, brutal crackdown on Crimean Tatars, killing of journalists, suppression of free speech and invasions, occupations and ongoing human rights violations at  home as well as in Moldova, Georgia and Ukraine” said Oksana.  “Ukrainians are Europeans.  We believe in a world governed by laws and values, such as those rooted in the UN Charter and European Union.  If we speak our native Ukrainian language, and are proud to call ourselves the daughters and sons of Kyi for whom our capital, Kyiv is named, it is because we can take pride in our fledgling democracy, our heritage, our values and our commitment to peace as Europeans,” asserted Oksana.

Whatever happens, Oksana remains confident in Ukraine’s future.  “We have endured Russian invasions, an engineered famine we call ‘Holodomor’ which sad,g parallels Ireland’s ‘An Gorta Mor’, and suffered occupations, genocides and subjugation by Russians before,” Oksana noted.  According to Oksana, “If we are left to defend ourselves without the defensive weapons that would help us stave-off this invasion and defend our homes, and the pledges made in the Budapest Memorandum to defend our sovereignty and territorial integrity are left unfulfilled, and even if we must defend our homes against these Moscovy-Sassenach invaders, we will do so, and Ukraine would rise again from the ashes of a Russian invasion as we have done before and take our place at the heart of Europe“.