Like Cassandra, Kyslytsya Had the Sight of Prophecy — But His Warnings Fell on Deaf Ears 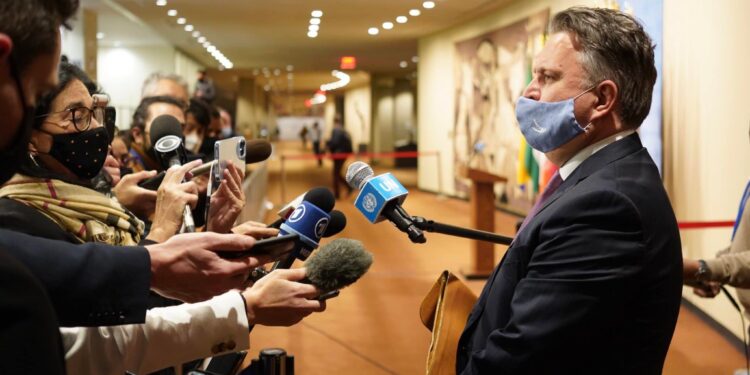 UNITED NATIONS — Yesterday, His Excellency Mr. Sergiy Kyslytsya, Permanent Representative of Ukraine to the United Nations, appeared before the Security Council to deliver a Statement on further violations by the Russian Federation of the sovereignty and territorial integrity of Ukraine.  In his blistering remarks, Ambassador Kyslytsya provided the UNSC with a candid, if not forceful assessment of the common perception that Russia has used its role as a Permanent Member of the UNSC to paralyse the UN from fulfilling its mandate of promoting peace and deterring war.

Highlighting Russia’s propensity for its actions to depart sharply from its rhetoric, Ambassador Kyslytsya reminded the UNSC of the words of Russia’s Ambassador to the UN, spoken in the same chamber, only a few, short days ago:

Russia’s unilateral decision to recognise its proxy regimes in temporarily occupied Luhansk and Donetsk, a gross violation of international law, effectively voids its responsibilities under the UN Charter, further repudiate its commitments under the Budapest Memorandum and renounce its obligations under the very Minsk Agreements it cited in the UNSC have made abundantly clear for the world to see that Russia feels it is not bound by treaty, contract, obligation or any semblance of a rules-based world order.  Moreover, Russian President Vladimir Putin laid bare for the world to see and hear that his previous claims that Ukraine’s NATO membership ambitions were at the heart of his concerns for Russia’s safety was a mere ruse, unequivocally declaring Ukraine to be an existential issue is his real concern:

For the past several month, Putin has caused a succession of world leaders, including German Chancellor Scholz and French President Emmanuel Macron, to make the pilgrimage to the Kremlin to negotiate on security guarantees to satisfy Putin’s demand that Ukraine permanently be blocked from NATO membership.  Despite Putin’s biography, in which he describes what he saw as his ‘destiny‘ to reunite the former Soviet Union, and last summers essay in which he clearly enunciated his belief that former Soviet Republics and Warsaw Pact countries ‘belong‘ to Russia, world leaders persisted in opting-in to Putin’s misdirection and focused on NATO security guarantees.  Last’s night speech by Putin, in which he signed the instrument recognising Russia’s proxy regimes in Ukraine’s Luhansk and Donetsk underscored that NATO was never the issue – it was always Russia’s territorial ambitions to reclaim control over Ukraine that has driven Putin’s actions.

The West, which has continually subsidised Putin’s insatiable propensity for flouting international law and occupying the sovereign territories of Moldova, Georgia and Ukraine has now realised, far too late, that they should have believed Putin when, like Hitler, articulated ad nauseum, far in advance what were his genuine goals.  Ignoring Putin’s biography and last summer’s essay, and 22-years of invasions and illegal occupations of sovereign territories belonging to Russia’s neighbours, and a trail of blood from the hamlet of Salisbury to Syria, the West persisted in its self-inflicted fantasy that Putin could be trusted as a rational actor and reliable partner.

Western leaders who misspent the last few months in folly trying to negotiate security guarantees and ignoring Putin’s stated territorial, expansionist claims must now face the reality they undermined Ukraine’s right to individual and collective self-defense under Article 51 of the UN Charter.  From Germany refusing to state unequivocally that Nord Stream 2 would be cancelled or allowing Estonia to transfer German-made artillery to Ukraine for its self-defense (ach, sure, in their ‘solidarity‘ they were willing to send helmets and hospital beds instead) to France continuing to offer concessions to appease Putin, Europe must now admit its culpability in making Ukraine a vulnerable lamb to be devoured by the wolf that is Russia.  The United States and United Kingdom fared no better.  They each failed spectacularly in upholding their commitments in the Budapest Memorandum to safeguard Ukraine’s territorial integrity and independence – guarantees made in exchange for Ukraine having made the world incredibly safer by voluntarily putting what was the 3rd largest nuclear arsenal in the world beyond use in exchange for security guarantees (by no less than Russia).

All of this has not only positioned Ukraine to be a sacrificial lamb, but has made Europe’s much vaunted talk of values and rules effectively meaningless.  From his perch in North Korea, Kim Jong Un’s belief that possessing a nuclear arsenal is a necessary element in security the longevity of his authoritarian regime has been reinforced.  In Tehran, the quest to complete the ability to create a nuclear weapon has undoubtedly given Iran a new sense of urgency.  In the South China sea, Taiwan must now be quaking in its boots having witnessed the bloodless ease by which Putin has now copper fastened the partition of Ukraine and show the UN and NATO have enablers in allowing it with 22-years of unending acts of concessions to Putin – each inviting new demands for appeasement.

The world is a far more dangerous place today because the West deluded itself into believing that Putin care about rules, values, commitments or any other recognisable feature of humanity.  Putin’s thirst for power and dominion over all lands from the Black Sea to the Baltics will plague Europe for years to come.  Anyone who believes that the rest of Europe is safe at this point will undoubtedly continue to be a willfully blind enabler of the juggernaut that is wielded by Putin in his almost mystical quest to reunite the Soviet empire.

History will record, with no small amount of scorn, that Europe sleep-walked into this fiasco while ignoring the alarm for years, repeatedly hitting the snooze button until waking-up to the reality that Putin’s unquenchable appetite to destroy Europe’s security architecture and subdue his sovereign neighbours was well on its way to work.