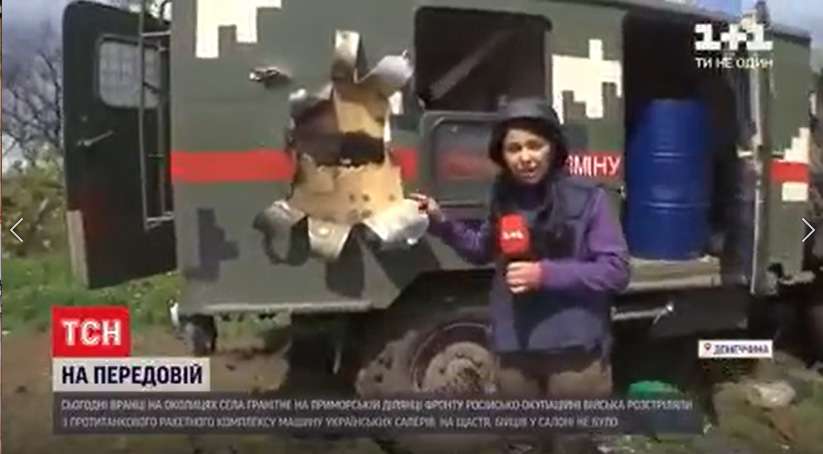 KYIV – Russian led forces cooperating with local militias under their control fired an Anti-Tank Guided Missile at Ukrainian soldiers and their vehicle while they conducted humanitarian de-mining operations close to the contact line near the villages of Granitne and Mirne.

The United Nations (UN), European Union (EU) and Ireland, which at present occupies a non-permanent seat on the United Nations Security Council (UNSC), have all recently called on Russia to abide by the cease fire agreement and fully implement the Minsk Accord and cease their temporary occupation of internationally recognised Ukrainian territories.  Last month, Russia amassed more than 120,000 combat ready troops on Ukraine’s border in the biggest build-up to threaten Ukraine and Europe since 2014.  Despite claiming to have called their combat troops to return to barracks, more than 80,000 Russian troops remain on Ukraine’s border, leaving Ukraine, Europe and NATO at its highest alert levels.

Russia orchestrated the invasion of Donetsk and Luhansk regions of Ukraine’s Donbas in Eastern Ukraine in 2014.  Since then, Russia has used their effective control over the region to attempt to install illegitimate regimes friendly to the Kremlin, namely the un-recognised, so-called Luhansk People’s Republic (LPR) and Donetsk People’s Republic (DPR).  The international Minsk peace negotiations in 2014 put an end to the large-scale military operations in the Donbass conflict zone.   Ireland has joined with the international community at the United Nations (UN) and the European Union (EU) to condemn Russia’s conduct and has voted repeatedly to impose sanctions on Russia until they end their temporary occupation of Ukraine’s Donbas and Crimea.  The UN and EU have repeatedly reiterated their support for the restoration of Ukraine to its internationally recognised borders.

Ukrainian troops conducting de-mining operations near the villages of Granitne and Mirne came under small arms fire with Russians attacking them and and un-armed vehicle, a military panel van, with what is suspected to be a 9M133 Kornet Anti-Tank Guided Missile (NATO’s nomenclature of this system is the AT-14 Spriggan).  The 9M133 Kornet is designed for use against heavy armour and tanks.

Anti-personnel mines are victim-activated devices which result in severe injuries.  The most common injuries are limb-shattering causing spontaneous amputation or requiring surgical amputation.  Proponents of landmines claim the purpose of landmines is not injure, not kill with the corresponding demand on an enemy’s resources for medical care and logistical support.  Advocates of the use of Explosive Remnants of War (ERW) routinely neglect the unintentional and indiscriminate impact they cause.  An estimated 80% of all ERW casualties worldwide are suffered by civilians, often decades after conflicts end.  Owing to the nature of contact lines, agricultural lands often become contaminated with ERW with farmers and their children becoming the most common casualties in the aftermath of conflicts.

According to the UN, Ukraine and NGOs, the extent of ERW contamination in Donbass is difficult to assess accurately.  In 2014, Russian forces illegally occupied some 45,000 square km of Ukrainian territory (an area exceeding the size of Switzerland).  A year after the outset of the conflict, in 2015, the Ukrainian Defense Ministry estimated that approximately 37,000 square km of territory in Eastern Ukraine, including both temporarily occupied Donetsk and Luhansk, were significantly contaminated with ERW.  While much of the contamination occurred along the 457km contact line which has remained almost unchanged since 2014, early combat saw geographic shifts in control over areas which only served to contaminate a wider area, making ERW location, identification and removal significantly more difficult.  In 2018, the Ukrainian Defense Ministry revised its ERW estimates indicating a smaller area, approximately 7,000 square km of Ukrainian controlled territory and another 9,000 square km of temporarily occupied Ukraine, were contaminated with Russian placed ERW.

In 2005, Ukraine became a signatory to the Ottawa Treaty, also known as the ‘Anti-Personnel Mine Ban Convention‘, or more commonly the ‘Mine Ban Treaty‘.  The Ottawa Treaty strictly prohibits the usage, as well as production, acquiring, stockpiling or transferring of anti-personnel mines.  Ukrainian authorities deny usage of anti-personnel mines in the Donbass conflict zone, accusing the self-styled DPR and LPR militias of laying them.  Several international NGOs confirmed such claims (the 2017 Landmine Monitor attributes the usage of anti-personnel landmines only to non-state armed groups).

According the the Landmine Monitor 2018 Annual Report, OHCHR statistics indicate that as of 2018, Ukraine now ranks 3rd in the world for ERW related casualties (including anti-personnel and anti-armor mines).  Only Afghanistan and Syria rank higher than Ukraine for ERW deaths and casualties.

Ukrainian troops routinely conduct humanitarian operations to remove the landmines Russia has placed along the contact line.   More than 1,000 Ukrainians have suffered ERW-related casualties recorded since 2014.  In 2018, some 43%of conflict-related civilian casualties were attributed to mine and explosive remnants of war.  Mine incidents remained the leading cause of child casualties in 2018.  estimated two million Ukrainians exposed to landmine risks, with 70 per cent of at-risk families struggling to go about their daily lives to avoid ERW, whether it be going to get food, school, home, hospital or crossing the ‘contact line’.

Currently, some 2 million Ukrainian civilians, including 220,000 children, live at or in a close proximity to ERW contaminated lands.  ERW contaminated lands are often dispersed in agricultural areas, main routes of travel, on the outskirts of residential areas and along waterways and walkways.

The Russian Emergency Situations Ministry routinely organise what they claim are ‘humanitarian convoys’ to temporarily occupied Donbas.  Russia refuses to allow international monitors to visually or physically inspect the vehicles or their cargo.   On 24 May 2018, what was the 77th Russian convoy which included more than 40 lorries transporting an estimated 400 tons of cargo entered temporarily occupied Ukraine from Russia.   Russian officials claimed the convey only carried ‘relief supplies’ such as baby food, sundries and medical supplies.  The OSCE was refused access to inspect the shipments.  An earlier convoy in 2018 saw a equally large convoy from Russia transporting ‘humanitarian supplies‘ enter temporarily occupied Ukraine.  While attempting to observe the unloading of the vehicles armed Russians and militiamen stopped the OSCE SMM patrol, prohibiting them access to the area and interfering with their attempts to photograph the unloading of the supposed ‘humanitarian supplies‘.  Russia, and the puppet regimes they have installed in temporarily occupied Donbas, have continued to receive dozens of ‘humanitarian’ shipments from Russia and have consistently refused to cooperate with OSCE observers.  Open Source Reporters, such as Bellingcat, routinely publish videos and photographs of these shipments.

The objective of humanitarian de-mining operations is to clear lands of ERW to a depth that makes the ground safe for human and animal use.  The laborious work is conducted by trained personnel, including military personnel and sometimes NGOs who have specific experience in removing explosive devices or training local groups to do so.  Specially trained dogs can be used to help identify general areas where ERW exist, however, trained personnel are required to locate individual devices to make them safe, render them inoperable or destroy them in place.

According to a paper by Elena Ostanina first published in Ukraine-Analysen, Nr. 204 on July 15, 2018, the cost associated with de-mining operations can be crippling:

To launch large-scale mine clearance operations with the participation of international and supranational organizations, the following challenges should be overcome by the Ukrainian authorities: