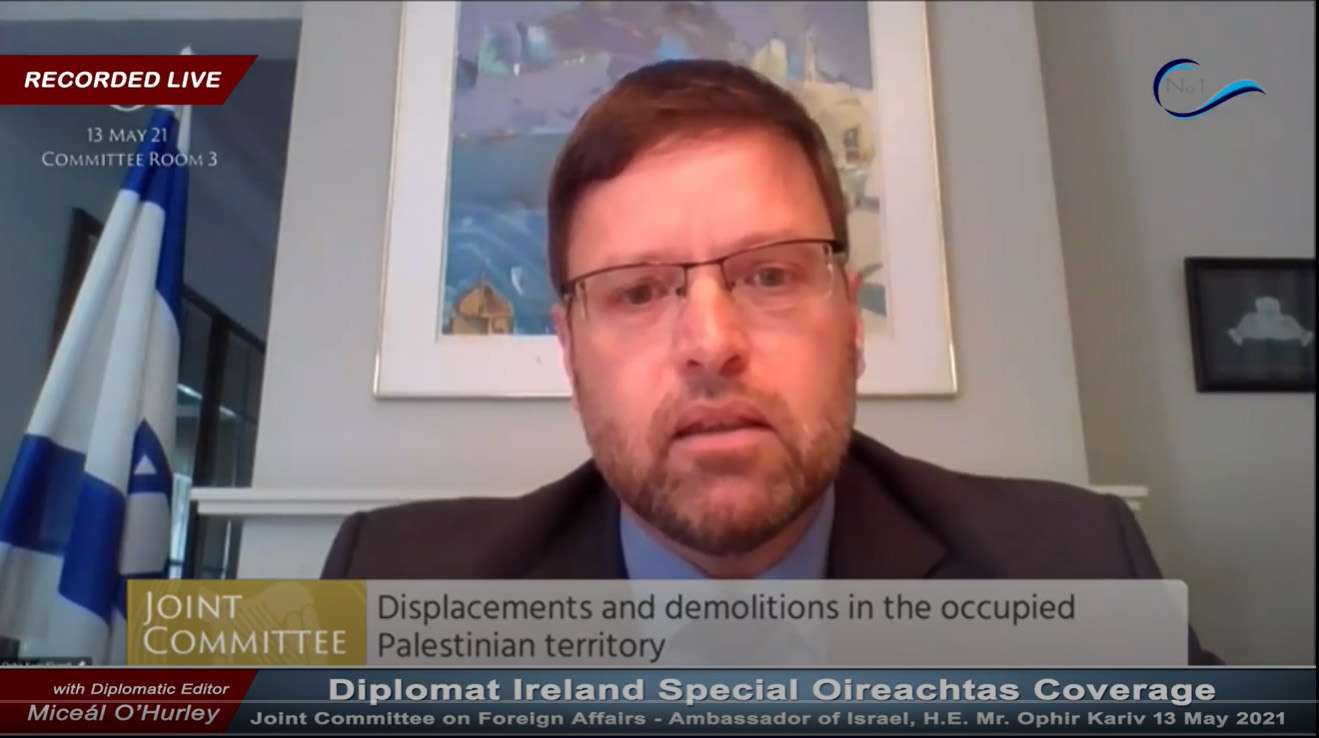 DUBLIN — The Oireachtas Joint Committee on Foreign Affairs and Defence commenced a series of meetings to examine demolitions and the forced displacement of people in the Occupied Palestinian Territory (OPT).  The Middle East Peace Process is a matter chosen for priority consideration by the Joint Committee for its 2021 Work Programme in 2021.

Cathaoirleach of the Committee, Charlie Flanagan, TD spoke to the purpose and intentions of the Joint Committee meetings, “The Committee is holding a series of public meetings with stakeholders following reports of the demolition of buildings in the occupied Palestinian territory, which were built with the assistance of Irish Aid, and the forced displacement of people to make way for the construction of settlements. The Committee welcomes this engagement with witnesses to discuss the issue including the humanitarian impact of forced displacement, and the Israeli policy in relation to settlements.”

On Thursday, 13 May 2021, His Excellency Mr. Ophir Kariv, Ambassador of Israel to Ireland provided testimony to the Joint Committee virtually.  Ambassador Kariv was joined by  Jackie Goodall of the Ireland Israel Alliance.  Former Teachta Dála Mr. Alan Shatter, who previously served as Ireland’s Minister for Justice & Equality and before that Minister for Defence joined the panel to provide evidence.  The Joint Committee also benefitted from the testimony of an expert in International Law, Ms. Natasha Hausdorff of the UK Lawyers for Israel Charitable Trust.  Diplomacy in Ireland – The European Diplomat’s Special Coverage of the Oireachtas Joint Committee on Foreign Affairs & Defense can be viewed on our YouTube Channel.

Ambassador Kariv and Ms. Jackie Goodall submitted copies of their prepared testimony to the Joint Committee Prior to the meeting and they can be viewed here:  Statement of Ambassador Kariv  |  Statement of Ms. Goodall.  A transcript of the remarks of His Excellency Mr. Ophir Kariv can be read on the Oireachtas website.

Earlier in the week on Tuesday, 11 May, Her Excellency Dr. Jilan Abdalmajid, appeared virtually before the Committee.  The Joint Committee also heard from Professor Noura Erakat, of Rutgers University (New Jersey, USA) and Dr. Susan Power, Head of Legal Research and Advocacy for the Human Rights organisation Al Haq, and who also serves as a board member of the Irish-Palestinian Alliance, Sadaka; as well as Mr. Éamonn Meehan, also a Sadaka Board member, gave testimony virtually.

A third public meeting to discuss the issue will take place next week.

You can watch a wide-ranging interview of His Excellency Mr. Ophir Kariv as my guest on a previous episode of  ‘In Conversation This Week with Miceal O’Hurley’ with Special Guest Ambassador Mr. Ophir Kariv,  Ambassador of Israel to Ireland on our YouTube Channel.  You can also view a video of Diplomacy in Ireland – The European Diplomat’s coverage of Ambassador Kariv’s previous testimony before the Oireachtas Joint Committee on Foreign Affairs & Defence in December 2020.

Thank you for the invitation to participate in this discussion here today.

The subject of today’s meeting is an important one. In addition to discussing the historic, legal and humanitarian aspects of the issue at hand, today’s discussion can also be a starting point to explore the ways in which Ireland can constructively contribute to progress in the Middle East peace efforts in general and to Palestinian welfare in particular.

The area referred to today as the West Bank was first delineated in 1949 in the armistice agreement signed by Israel and Jordan following the Israeli War of Independence. That war was launched by the Arab world, including the Palestinians, to prevent the implementation of the two states solution, known as the partition plan, proposed by the UN General Assembly in 1947 and accepted by the Jewish national leadership. In that war the newly established State of Israel thwarted the coordinated attempt of five Arab armies and Palestinian militias to exterminate the nascent State. In part due to inspiration by then Palestinian leader, the Nazi collaborator Haj Amin El Husseini, not a single Jew remained in areas under Arab control in what used to be mandatory Palestine. At the same time, Arabs living in Israel constitute today 20% of its population and enjoy full and equal civil rights.

After the war, that area was annexed by Jordan in an act recognized by only two states.  Israel gained control over the West Bank in 1967 following another war of self-defense forced on it by several Arab armies including Jordan’s.

Following the Oslo Accords between Israel and the PLO, the Palestinian Authority was created and for the first time in their history, Palestinians achieved self-administration.

While Arab citizens of Israel are the only Arabs in the Middle East to enjoy full and equal civil rights in a real democracy, the only time the Palestinian national movement managed to produce any tangible achievements has been through direct negotiations with Israel.

Area C, which is the geographical area we are discussing today constitutes approx. 60% of the territory of Judea and Samaria, or the West Bank. At the same time, it is home to less than 10% of Palestinians living in the West Bank, while over 90% live under full civil administration of the Palestinian Authority in Areas A and B. Those areas were agreed on and defined in the signed Oslo accords. These accords also specify that Area C remains under full Israeli control – both security and civil. In the lack of progress in negotiations due to years long Palestinian refusal to renew them, those agreements continue to serve as the legal and practical framework of everyday life in those areas.

The final status of these areas is one of the main issues to be negotiated in the framework of a final peace agreement which is for all our mutual benefit. Israel has repeatedly shown its
readiness to make painful compromises for the sake of a genuine peace and we want to achieve a just and lasting peace with the Palestinians.

In the interim, in accordance with international law and the signed agreements, Israel continues to administer Area C through the Military Commander of Judea and Samaria. Under the provisions of International law and the signed agreements, the Israeli authorities are also responsible for civil administration in area C, including safety, planning and construction. Therefore, all activities in these spheres have to be coordinated with the relevant Israeli authorities.

Israel is committed to carrying out its responsibilities in area C to maintain law and order according to international law and the existing agreements.

We call on all stake holders, including NGOs and foreign governments, to conduct their activities in this area in a responsible and lawful manner and make sure all activities and projects are adequately coordinated with the relevant Israeli authorities.