His Excellency Mr. Sandeep Kumar, India’s Ambassador to Ireland on ‘In Conversation This Week with Miceal O’Hurley’ 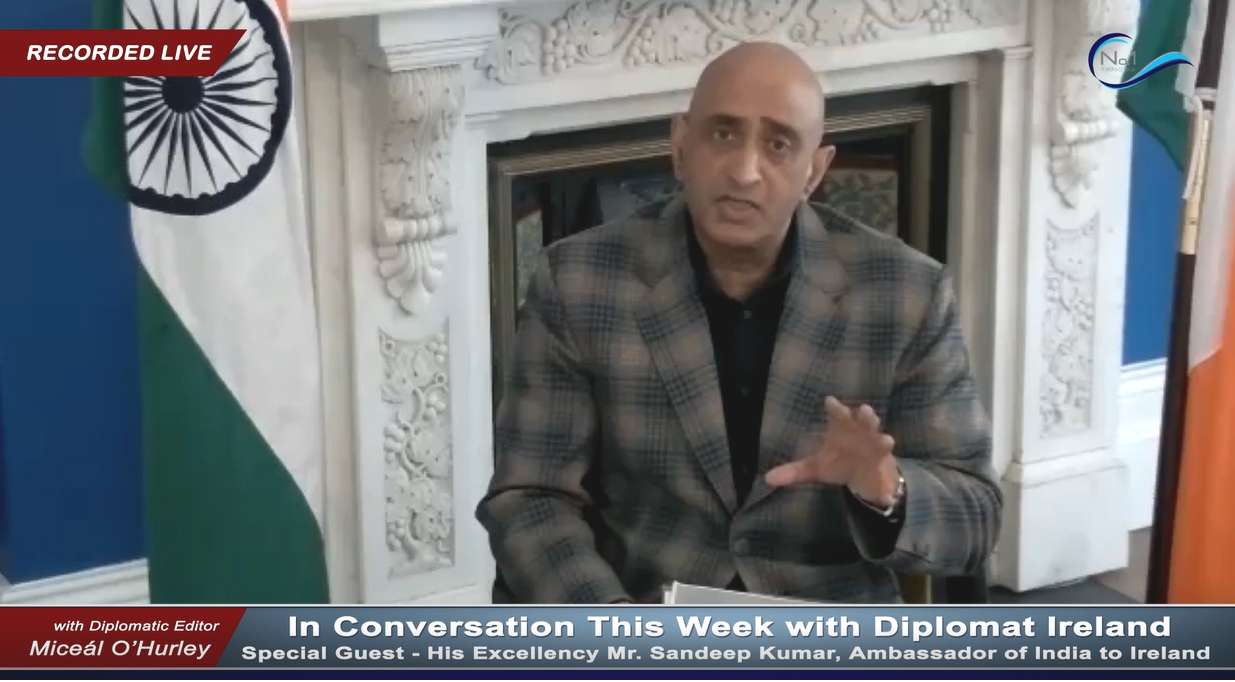 DUBLIN – On 17 May 2021, His Excellency Mr. Sandeep Kumar, Ambassador of the Republic of India appeared as the Special Guest on the latest episode of ‘In Conversation This Week with Miceal O’Hurley.’  Ambassador Kumar addressed the significant topics of the day, many driven by the Covid-19 pandemic as well as India occupying a non-permanent seat on the United Nations Security Council (UNSC).

Addressing the challenges of how the Covid-19 pandemic has had an impact on the delivery of Consular services, His Excellency highlighted that the Indian Embassy in Dublin continued to operate throughout the pandemic, without any closures, often working nights and weekends to meet the needs of the substantial Indian community in Ireland.  The Indian diaspora in Ireland is significant, with many working on the frontlines of Ireland’s medical, health care, high-tech, IT, education and other sectors.

The interview, which appears on Diplomacy in Ireland – The European Diplomat as well as the our YouTube Channel covered the second-wave Covid-19 outbreak in India including its government’s total mobilisation to ramp-up vaccinations and get supplies to front-line workers.  Ambassador Kumar explained India’s unprecedented efforts to streamline customs clearance and implement a logistical system to ensure international aid contributions were cleared and distributed in a timely manner.   His Excellency told Diplomacy in Ireland – The European Diplomat that he had personally tracked the delivery of some 1,300 oxygen concentrators and 2 oxygen generators that Minister Colm Brophy announced Ireland had donate to India.  Owing to India’s newly streamlined customs clearance system for medical supplies, and their coordination with the International Committee of the Red Cross, he informed the host of ‘In Conversation This Week with Miceal O’Hurley’ that with the Irish donations reached the front line medical services within a few days of departing Dublin.  Other international donations are also being distributed across India in conjunction with India’s massive effort to increase production of medical grade liquid oxygen.  Ambassador Kumar expressed his gratitude, and the of the Indian government and people for the generosity of the Irish people and that of the international community.

Concerning the Serum Institute having previously announced delays in shipments and difficulties in meeting production demand for vaccines, His Excellency outlined India’s financial aid, support mechanisms and efforts to ramp-up production.  Worldwide supply-chain shortages have also hampered vaccine production causing delays in Europe and the United States as well as India, causing further delays for other regions, most notably Africa.

Ambassador Kumar cited the statistics on India’s impressive success with their vaccination programme.  However, the Ambassador was abundantly clear that India is not celebrating and will continue to make all of its resources available to continue its vaccination programme, especially in sub-suburban and rural areas.  Despite significant achievements in implementing its vaccination programme, His Excellency Mr. Kuman was adamant that India’s government would not downplay the seriousness of the situation or underestimate the significant work still ahead.  This includes taking a lead on tracking the Covid-19 variants that continue to emerge in India as well as globally.

Before the closing segment of the interview Ambassador Kumar spoke about the recent cyclone that hit India, the largest cyclone of its type in recorded history.  His Excellency indicated that India has mobilised its military and civil support mechanisms to assist the victims of the cyclone that hit less-than 24-hours before the interview.

Ambassador Kumar also addressed India, along with Ireland, occupying a non-permanent seat on the UNSC, along with Ireland.   Speaking to the significantly strong and historic bi-lateral relations between Ireland and India, His Excellency outlined areas of significant conversation.  He also took the opportunity to underscore India’s willingness and ability to meet the demands faced by the UNSC, giving examples of how India is already discharging an elevated role in the world community.  The discussion also covered the necessity of reform in the UNSC which  would make it function more effectively and fairly as well as making it more reflective of the modern world from its post World War II composition.

Minister Coveney and Minister of State Brophy Announce Funding of Over €9m for Civil Society Organisations.

Minister Coveney and Minister of State Brophy Announce Funding of Over €9m for Civil Society Organisations.