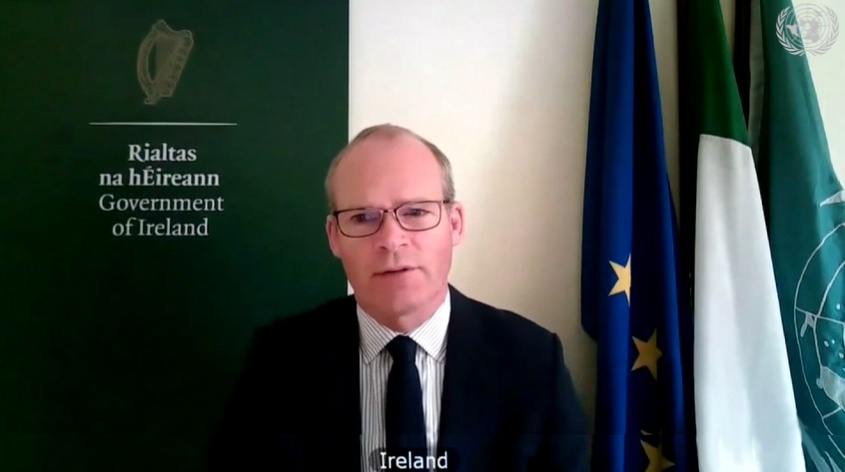 Irish Minister for Foreign Affairs, Simon Coveney T.D., addressed a United Nations Security Council (UNSC) on multilateralism and the United Nations on Friday, 7 May 2021.  The meeting, chaired by China, is one of the signature events of China’s Presidency of the Council in the month of May.  China’s State Councillor and Minister for Foreign Affairs, Mr. Wang Yi, Chaired the meeting, held virtually owing to the ongoing Covid-19 pandemic.  The meeting began with a briefing from Mr. Volkan Bozkır, President of the United Nations General Assembly.

The meeting focused on the role of the United Nations and the multilateral system in addressing global challenges such as COVID 19, climate change and the maintenance of peace and security.  Ireland’s Foreign Affairs Minister, Simon Coveney, emphasised that the COVID 19 pandemic has demonstrated the vital need for multilateral cooperation, “We must uphold the multilateral system, promote respect for international law, and ensure that the United Nations is equipped to meet global challenges. Ireland takes this responsibility deeply seriously.”

Ireland, which prides itself on its commitment to multilateralism, noted the crucial role of international organisations and agreements, and of how multilateralism enhances national sovereignty.  Speaking to the UNSC meeting participants, Coveney said, “Through the UN and regional organisations, we are working collectively to reduce poverty and hunger, promote and defend human rights, increase access to education and healthcare, protect migrants and refugees, advance gender equality and build sustainable peace.  Vital institutions, such as the Human Rights Council and the International Criminal Court, uphold international law and protect human rights, which apply equally to all.”

In a remark that may have been intended for US Secretary of State Antony Blinken, who participated in the meeting, Coveney said, “Landmark agreements such as the 2030 Agenda, the Paris Climate Agreement, and the Treaty on the Prohibition of Nuclear Weapons, seek to shape a sustainable and secure future for all of the inhabitants on this planet.  Collective multilateral engagement enhances our sovereignty, rather than diminishes it.”  During the Trump Administration, the United States adopted an isolationist, protectionists and sometimes nativists posture, withdrawing from multilateralism and at times was hostile to international organisations and cooperation.  In his first 100 days in office, US President Joe Biden, and his Secretary of State Anthony Blinken, have made a point of steered America back to its traditional path of being more embracing multilateralism.  The US has rejoined the Paris Climate Agreement but has continued to decline to sign the Prohibition of Nuclear Weapons.   Ireland, especially under Foreign Affairs Minister Coveney, is often seen as an influential sounding-board for US administrations, especially regarding issues such as European affairs, peace and aid.

Coveney also used the meeting to urge the UNSC to continue to embrace reform.   Speaking of making the UNSC representative and more capable of acting in response to crises, Coveney said, “A reformed and more representative Council, that better reflects global 21st century realities, would have an enhanced legitimacy. That legitimacy is essential to deliver on this Council’s mandate to maintain international peace and security.”  The UNSC is often criticised as reflecting the world of the mid-20th century and is not attuned to the growth and importance of other nations, and the diminished status of some of its Permanent Members on the world stage.