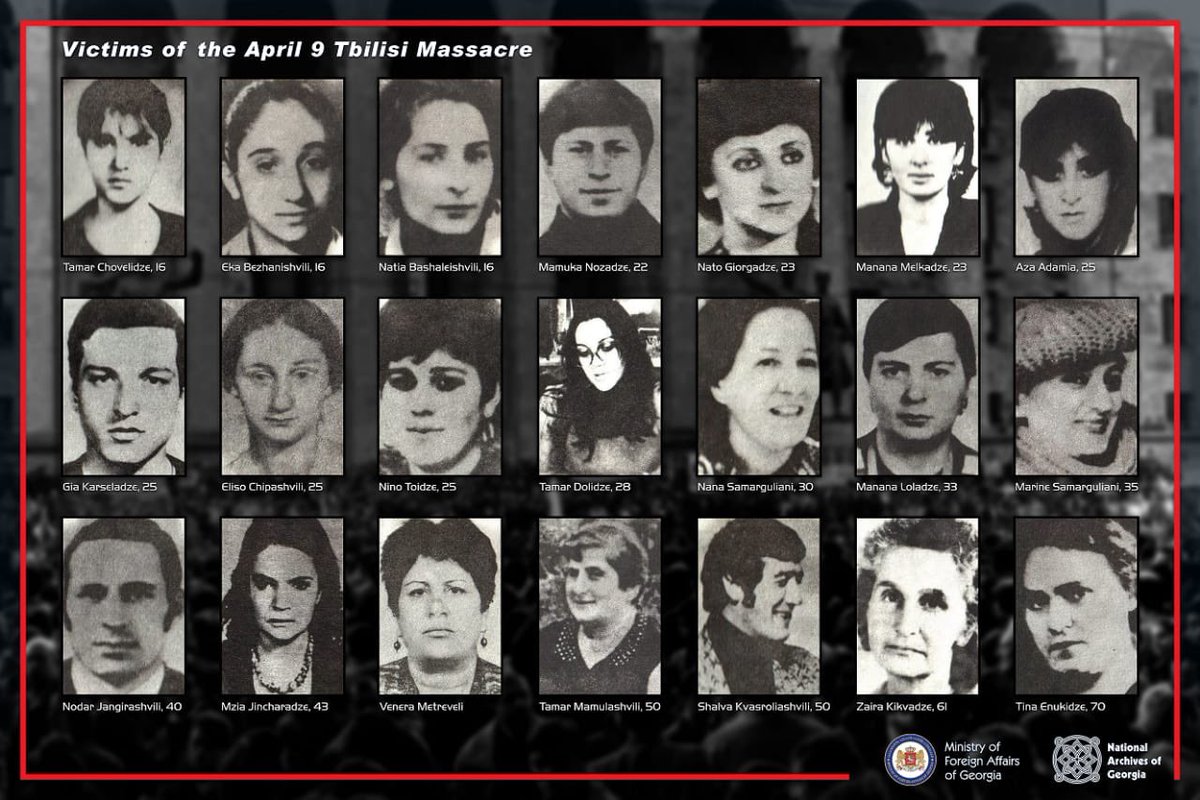 DUBLIN – Today, His Excellency Mr. George Zurabashvili, Ambassador of Georgia to Ireland, will lead the Embassy and Consular Staff in person, and Georgians throughout Ireland, in a virtual commemoration of the 9th of April Tragedy.  The Embassy of Georgia maintains an up-to-date Facebook page and other social media, as well as the bilingual Embassy of Georgia (Dublin) website where more information will become available.

9 April, marks the anniversary of the 1989 Tragedy in which USSR tanks brutally sought to assert its power over the Republic of Georgia, killing and wounding scores of victims.  The event is seen as a pivotal moment that instigated the Soviet’s own fall from power and resulting in a free, independent and democratic Georgia.  In now infamous photographs, videos, audio recordings and newspaper reports the details of the unnecessarily and violent oppression of ordinary Georgians pleading for reforms, greater autonomy and end to Soviet rule create an indelible record of the evils of communism and the Soviet State.

Ironically, it was the very reforms brought about by the then President of the Soviet Union, Mikhail Gorbachev that gave the Georgian people hope for freedom and justice only to see the Kremlin react with unnecessary brutality.  The reforms initiated by Gorbachev, known in the West as Glasnost (гла́сность), originated in late 18th century political philosophy that sought to promote good government in an age of absolute autocracy – which included the very openness and transparency sought by the Georgian people.

The Georgian people had a long and vibrant value for independence and freedom.  Beginning in the late 1980s, student protests became more commonplace, giving momentum to the independence movement.  In the Spring of 1989, student protests increased in frequency and new protest tactics that had worked in independence movements and with women’s suffarage for the vote, such as hunger strikes, left heavy-handed Kremlin officials feeling their grip on power might slip away.

In the nascent light of 9 April, Georgian Patriarch Ilya II, addressed throngs of demonstrators of demonstrators and warned them of imminent danger if they did not disperse.  The Patriarch’s pleas went un-headed as the demands for justice, transparency, freedom, democracy and independence had reached a fever-pitch having grown far beyond the earlier student movement.   The appearance of flags of the First Georgian Republic (1918-1921) and the crowd chanting for an end to Soviet occupation of Georgia became unbearable for the communist regime in Moscow.

Under the cover of darkness Soviet tanks rolled into Tbilisi, the capital and epicentre of national protests.  Creating a cordon around the central city, Moscow ordered special forces of the Soviet Ministry of Internal Affairs (MVD), armed with trench spades, clubs and tear-gas to trap the demonstrators, leaving them no escape routes, then use deadly force to suppress the demonstrations.  The 9 April 1989 Tragedy, a plan by Moscow to use brutal military forces to suppress civilian protestors caused the death of twenty-one protestors (eighteen of them women) and resulted in 427 Georgian civilians being injured.

The infamy of 9 April became a defining moment in Georgia’s struggle for liberation and equally as much of a beacon of light for oppressed republics across the USSR as it was the death knell for the Soviet Union.

What little remained of Georgia’s intellectual and shared cultural affinity with Russia was left in tatters.  Any hope that Glasnost, or that Perestroika (a Soviet reform initiative) was anything more than a last-ditch attempt for communists in Moscow to retain power over Soviet Republics, died along with the victims of 9 April.  Instead of reform, Gorbachev’s regime earned an enduring legacy that it was willing to wade waist deep in the blood of the people was were the previous Moscow regimes who seemed only to understand the instruments of a police state and the gulag.

By the dawn of the next day the local communist government, installed and sustained by Moscow, was deemed illegitimate and lacking in credibility for cooperating with the deadly attacks of 9 April.  Moscow’s attempt to impose a curfew, refuse to allow public gatherings and even using mass arrests in the name of State security only served to embolden the demand for freedom and independence.

Nationalist activists became emboldened, making renewed and more expansive, if not radical demands for freedom, putting the Kremlin and the Georgian people on a collision path.   Demands of national activists became more radical and Georgia’s staying in the

For two further years, the Georgian people continued to struggle against the shackles of Moscow’s oppression.

On 9 April 1991, in a moment as imbued with symbolism as it was self-determination, Georgia proclaimed its independence from the Soviet Union.

Today, Georgia has a deeply ingrained ethos of democracy and enacted significant reforms (and continues to do so).  Georgia has both embraced its place in Europe and is embraced by her.  Active in the Eastern Partnership and fully engaged in the European Union, Georgia and her people have transformed tragedy into triumph and nurtured enduring democratic values in her people.  9 April 1989 will forever mark that indelible moment in the memory of modern democracy when Georgia suffered, but became determined to transform the sacrifice of innocent Georgian people into a worthy moment in the annals of human history.

Cover photo courtesy of the National Archive of Georgia.