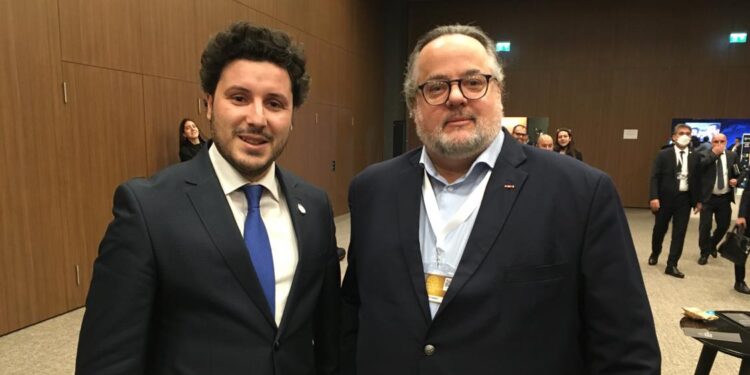 DUBLIN — Montenegro, long considered the frontrunner in the Baltics to next join the European Union (EU) membership ranks, has been caught-up in controversy for its opposition to imposing sanctions on Russia.  Prime Minister Zdravko Krivokapic, who leads a coalition government, has delayed imposing sanctions on Russia contrary to EU policy and world opinion.  Members of his party and cabinet, long thought to be soft on Russia, declined to endorse sanctions.

Montenego’s law on international restrictive measures requires the Government to confirm restrictions prior to disseminating the list of sanctions to State institution for implementation.  Krivokapic’s recommendation to form a Coordination Body to implement the sanctions would violate Montenegrin law.  Critics of the Government accuse Krivokapic of attempting to stall sanctions by creating an illegal mechanism to implement and enforce them.  Krivokapic, sometimes described a centrist Christian Democrat is more routinely described as a right-wing populist.  He led the Future of Montenegro ticket in the last election but ousted from power as Prime Minister on 4 February.  He continues to serve in the lame-duck technocratic government until a new Prime Minister is inaugurated.

Prior to the Government session opening, Deputy Prime Minister Dritan Abazović accused Krivokapic of attempting to avoid Montenegro joining the EU in imposing a sanctions regime against Russia.  Abazović warned he would not support forming the Coordination Body while this government is in charge.

“If we want the Coordinating Body to function, the government first has to confirm sanctions. I am sorry that we didn’t make such a decision immediately because this is a disgrace to the state of Montenegro,” Abazović told the media.

According to a Tweet from the verified Twitter account of Abazović this morning, “The Government of Montenegro has adopted restrictive measures in response to Russia’s war of aggression against Ukraine“.  Abazović thanked all the country’s ministers for their cooperation.  The details of the sanctions have yet to be released.  The Government of Montenegro adopted the decision on anti-Russian sanctions on the 3rd attempt, overcoming previous compromise resolutions which Abazović railed against as unacceptable.  The imposition of sanctions by Montenegro is seen as a decisive victory for Abazović and signals the country’s continued resolution to tackle corruption, marks a clear commitment to the rule of law and it charts its own path in foreign policy.

Earlier, Montenegro expelled four employees of the Russian embassy only to be met with Russian retaliatory expulsions from their Mission in Moscow.

Abazović, the leader of Montenegro’s centre-left, pro-European ‘In Black & White’ coalition of independents, largely comprised of intellectuals, NGO activists, journalists and academics, entered into a coalition government with Krivokapic, and the centrist Aleksa Bečić of the Montenegro Democratic party in September of 2020.  These elections marked the first democratic change in Government in Montenegro.  President Milo Đukanović and the Democratic Party of Socialists (DPS) have controlled the government for 30-years ago.  Montenegro achieved independence in 2006.

Abazović, regarded as an intellectual, reformer and capable politician became the youngest member of the Parliament in 2012.  He rose to become Deputy Prime Minister following the 2020 elections.  Following the ouster of Krivokapic by the parliament, on 3 March 2022, President Đukanović asked Abazović to form a new government.

I had an opportunity meet with Dritan Abazović twice during the Antalya Diplomacy Forum in Türkiye last month, just after Russia unleashed a widening of their war in Ukraine with began in 2014.  Our first conversation was on the sidelines following the failed cease-fire negotiations between Russian Federation Foreign Minister Sergeii Lavrov and Ukraine’s Foreign Minister Dmytro Kuleba.  Abazović, young, energetic and articulate soon drew a crowd as we discussed the war that tore-apart the Balkans.  Our conversation of Montenegro’s transformation from being regarded as a Slavic state with deep ties to Russia to a pluralistic, stable, successful and democratic Balkan success story seemed to be of deep interest to the high-level delegates and attendees.

Abazović has the natural air of a teacher and master.   And yet, he remains approachable and accessible.  He makes eye contact with everyone to whom he speaks as though they were the most important person in the room.  From Minister of State to NGO activist, he treated everyone with the same respect.  Abazović’s effusive congeniality makes listeners fast friends and fans.  He is candid, possibly frighteningly so for those stuck in past.  It is clear Abazović has a vision for Montenegro as a European nation, proud of its hard-earned diversity and sense of dynamic energy which creates unity.

Born in 1985, he is old enough to be personally aware of the tragedies and conflicts that tore-apart the Balkans throughout the 1990s.  Although mindful of the past he is clearly an advocate for Montenegro’s future in the EU.  And here is why his forming a government is critical to Montenegro bucking the trend of right-wing governments that have been gaining traction in Europe.

All that makes Abazović the dynamic statesman and politician Montenegro both supports needs at this hour stands in opposition to the past marked by cronyism, corruption and the constant embrace of Russia.  Politicians firmly rooted in the past undermine his chances of success.  Still, having been asked to form a Government by President Milo Đukanović, an iconic stalwart of the past, Abazović has the chance to continue moving Montenegro towards the centre of Europe and a more prosperous future.

What is at stake is not simply a change of government or the passing of the torch to a new generation.  Montenegro’s continued integration into the EU depends upon Abazović’s success.  To be certain, the politics of the past will continue to pose an obstacle.  Yet, there seems to be a groundswell of support, even amongst a population deeply divided by Russia’s escalation of their 8-year long ware against Ukraine, that gives Abazović a growing mandate.  He is able and has proven himself talented enough to do the job.  Montenegro’s future orientation rests in his hands and with it, the possibility of a period of further EU expansion.

We agreed to meet again for a brief interview at our hotel, The Spice Hotel & Spa in Belek, Türkiye prior to us travelling to the airport at the end of the Antalya Diplomacy Forum which was held between 11-13 March.  The interview can be heard here: