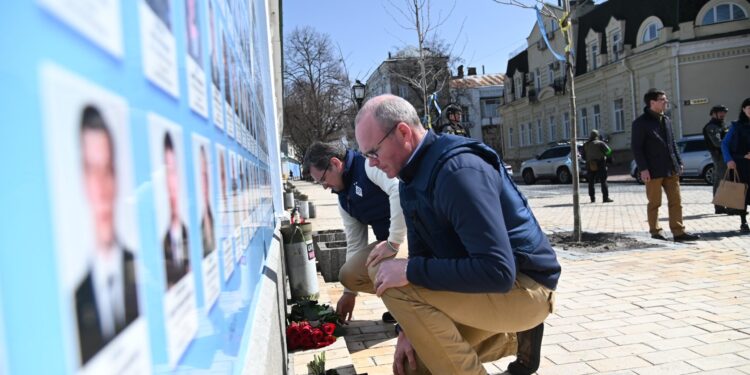 REPORTING LIVE FROM KYIV — Ireland’s Foreign Affairs Minister, Simon Coveney, visited Ukraine yesterday along with a flurry of other diplomats ascending on Kyiv. Russia’s redeployment of forces from the North of the country for an anticipated new offensive in the East and South has made Kyiv easier to access for the past week, having previously only been visited by those hazarding their safety. Coveney’s visit was timed to convey Ireland’s campaign to overcome President Vlodomyr Zelenskii’s previous criticism which quantified Dublin’s support for Ukraine’s EU membership bid as “well, almost”. Coveney’s visit was generally well received.  Kyiv is anxious to demonstrate continued European unity after right-wing populist and Russian apologist Viktor Orban won re-election last month and France’s Emmanuel Macron now must face a run-off election with another right-wing Russian advocate, Marie Le Pen.

Coveney began the trip to some significant criticism, travelling to Ukraine under the security of An Garda Síochána and not the elite Army Ranger Wing which distinguished itself last year with the successful evacuation of Irish citizens from Kabul as Afghanistan devolved into a highly unstable and fluid environment as the Government collapsed and the Taliban took control. An Garda Síochána normally provides security for Irish Ministers of State, internally and externally. However, in visiting an active war zone, two Irish Defense Forces officials who declined to be identified as they were not authorised to speak on the subject criticised the decision given the combat environment for which An Garda Síochána are not properly trained.  Further, being both Minister of Foreign Affairs and Defense choosing not to use the Defense Forces for security was seen by some as an “insult”. This criticism was purely domestic, however. In Ukraine and Poland, the visit caused long waits at the border where evacuees, mostly women and small children and infants, were left waiting for hours in the near zero temperatures while the roadways were cleared and the border made safe for Coveney to visit. Camera crews recorded people, including infants, removed from trains and cars at the border whom were left in the frigid open air for hours. It is unclear if these actions were taken on the part of Polish or Ukrainian border services or if the measures went beyond security considerations for Coveney alone.

Coveney’s visit with his Ukrainian counterpart, Foreign Affairs Minister Dmytro Kuleba, came on the heels of a high-level meeting with the leaders of those nations considered to be at the core of support for Ukraine’s efforts to maintain its sovereignty, Lithuania, Latvia, Estonia, Poland. These 4 Baltic countries that stand on Russia’s doorstep have long warned the West about the likelihood that Russia would launch a wider-war on Ukraine than the one they commenced in 2014 with the invasion and occupations of Crimea, Luhansk and Donetsk. They have also been at the forward edge of European efforts to ensure Ukraine has access to the arms they need to not only defend itself against Russia, but to move the conflict towards resolution which inherently includes the restoration of Ukraine to its internationally recognised borders. The 4 Baltic leaders met directly with Zelenskii.

Coveney also toured the devastation wrought by Russia in its now 6th week of expanded warfare against Ukraine. His visit took him to Bucha, just miles from the Kyiv city centre, which was discovered 2-weeks ago to have been a site of particularly brutal warfare being unleashed upon the civilian population. Satellite photographs have verified that the bodies of many civilians were left in the open for weeks after being subjected to what evidence seems to point to being torture and summary execution. Coveney returned to Kyiv and completed further meetings with members of the Ukrainian Government in which he touted Ireland’s presence of the United Nations Security Council as giving it a large voice. Coveney also commented publicly that Ukraine could learn useful lessons from the Good Friday Agreement which has largely brought sectarian and nationalist violence to an end on the island of Ireland.

While Coveney’s visit was adjudged a success, the comments about the United Nations and the Good Friday Agreement angered many Ukrainians. “We will not cede territory to Russia just to get this war over as some EU politicians are suggesting” said Maksim who asked that his last name be withheld. “Such suggestions are foolish and prove the EU still doesn’t understand the situation or Russia,” he continued. Another Ukrainian, Svitlana, who also asked that her last name not be used, was more direct, “My husband didn’t fight in Luhansk for 3-years for nothing. Are they crazy”? Svitlana (or Lana as she prefers) continued, “Do you think my son was recruited for territorial defense so we can give away our land just because the Orcs (Russians) demand it? If this is what the EU wants it is because they want it to keep buying cheap, bloody Russian oil and don’t care about Ukraine,” she said. Hearing Svitlana, Maksim added forcefully, “Let Macron give up the Left Bank and Berlin divide itself again or maybe Ireland should give more land to the British if they think this is a good idea”. The crowd that gathered during the interview began to cheer at their defense of Ukraine.

For civil society actor Nadiia Dobrianskii, who now resides in Ireland, the issue was clearly about human rights, “With the mounting evidence of mass murder in the formerly occupied Bucha, Irpin and other towns in the North of Ukraine, it is clear that ceding any territories to Russia will lead to mass murder and atrocities committed to the Ukrainian population. For this reason, ceding any territories to Russia is completely out of the question. It is morally indefensible even to contemplate that Ukraine should give up any of its territories after the Russian atrocities have been revealed to the world”.

Coveney’s remarks about the Good Friday Agreement were met with dismay. The idea of modeling a peace deal on giving Russia the right of becoming a partner in a process that would see the passportisation and seeding of Russian citizens on Ukrainian territory since 2014 with voting rights missed the mark entirely with Ukrainians. Be it an outright ceding of territorial rights to Russia based on occupation by force, or joining Russia in what would be tantamount to recognising Luhansk and Donetsk as independent Republics, or Crimea as Russian territory, by giving veto rights to the populations concerning rejoining Ukraine, both are seen by Ukrainians as a betrayal of all they have fought and sacrificed for these past 8-years.

The issue for Ukraine’s diplomats is becoming more acute by the day.  Despite promises of support from the Western nations, many Ukrainians have resolved that the West will continue to do as little as possible to help Ukraine in the ways it needs most, weapons, and rely on the long and mostly ineffective use of sanctions in the hopes of deterring Russia from further waging war upon them.  With the West having floated the idea of providing MIG fighters to Kyiv, T72s, and Germany pledging weapons for Ukraine very little has come of it, with the exception of support from the Baltic States and Slovakia this week which delivered operational S300 air defense systems to Ukraine.  The divide between Ukraine’s diplomats and politicians to deliver the weapons systems it needs to win this conflict and bring it to an end and the population which is proud of its Government’s performance since February 24th is growing.  If the West continues to imply or promote the idea of Ukraine not being restored to its internationally recognised borders it will only lay bare the chasm between resolving this conflict and achieving peace.  Few, if any here in Ukraine believe that anything less than a complete restoration of Ukraine’s authority over its territory will secure a lasting peace.  Diplomats and politicians are become ever more aware of how what plays in the international media and diplomatic forums may be fatal to Ukraine’s stability and future as a democracy at least in terms of maintaining those in power today.