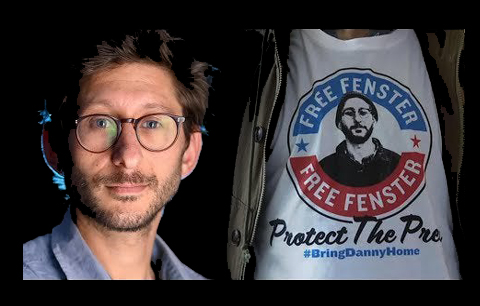 MYANMAR – In a continuance of the Myanmar military junta’s continuing arrest of journalists and civil society activists a military court sentenced illegally detained American journalist Danny Fenster to 11-years in prison for reporting on the military coup d’etat that brought an end to the democratically elected Government on 1 February 2021.  The 37-year old Fenster, a native of Detroit, Michigan, had been detained without bail in Insein Prison in Yangon since his arrest more than 5-months ago on 24 May 2021.  Fenster had been arrested at Yangon International Airport while returning to the United States to visit his family.

According to his lawyer, Fenster had been charged with 3 offenses by the military regime, including Visa breaches, unlawful association with an illegal group and incitement under section 505a of the Myanmar Penal Code.  Beyond the 11-year sentence, Fenster was ordered to pay a fine equivalent to approximately €42.  By count, Fenster was sentenced to 3-years incitement; 3-years for unlawful association; and, 5-years for the Visa immigration offense, all to run consecutively.  These were the maximum sentences under the Myanmar Penal Code.

The trial, which was conducted in secret session inside the Insein Prison, denied public access or coverage by members of the media.  According to the United Nations, Fenster is only one of approximately 126 known journalists or media staff that have been detained on specious charges since the military coup d’etat.  Some 47 of those arrested are still detained and reports are that three other members of the media cannot be accounted for at this time.  The military junta have been indiscriminate in their arrests, detaining both international and domestic media workers and journalists.

Fenster’s legal troubles are far from over.  Earlier this week, Fenster’s lawyer was informed that 2 new criminal charges were being levied against his client, including offenses against the regime’s sedition and terrorism laws.  including Section 124a of the Myanmar Penal Code, which covers “sedition” is routinely used by the military junta to detain anyone who criticises their brutal crackdown on democracy.  Violations of Section 124a carry a minimum sentence of 20-years imprisonment for “… attempting to bring hatred, contempt or disaffection toward the government and military”.

As for the accusation of “terrorism”, Section 50a of the Counter Terrorism Law makes it a crime to have contact with an officially designated “terrorist” or group.  Fenster potentially faces a minimum 10-year sentence if convicted with a maxium of life imprisonment under Myanmar’s sentencing guidelines.

“The unwarranted arrest and detainment of fellow journalist Danny Fenster by the military junta in Myanmar that seized power through a violent coup d’etat that ended popular, democratic rule by the people is an outrage.  Being held without bail, deprived of basic, proper legal consultation only to then be tried by a kangaroo court operating in secret defies all of the fundamental legal standards recognised throughout the world as essential to fairness, accountability and protecting the fundamental human rights of the accused.

Diplomacy in Ireland – The European Diplomat strongly condemns the military junta that now terrorises the people of Myanmar through repression and coercion, fear and intimidation and targeting members of the media is part of that perverse pattern of criminal behaviour on the part of the military regime.  I join my colleagues in the Overseas Press Club of America, the Foreign Press Association as well as journalists, diplomats and governments throughout the world to strongly condemn the ongoing travesty of justice that exists daily under the military junta in Myanmar and demand a restoration of the democratically elected interim Government of the National Unity Government of the Republic of the Union of Myanmar – Committee Representing Pyidaungsu Hluttaw (NUG – CRPH).  As long as Danny or any other member of the media are detained without fair trial, due process under the law and the complete observation of their human rights no journalist in Myanmar is free to report the truth, gather facts and help the world understand the cruel repression under which the Burmese people suffer daily under the thumb of the military junta that illegally seized power,” said Miceál O’Hurley.