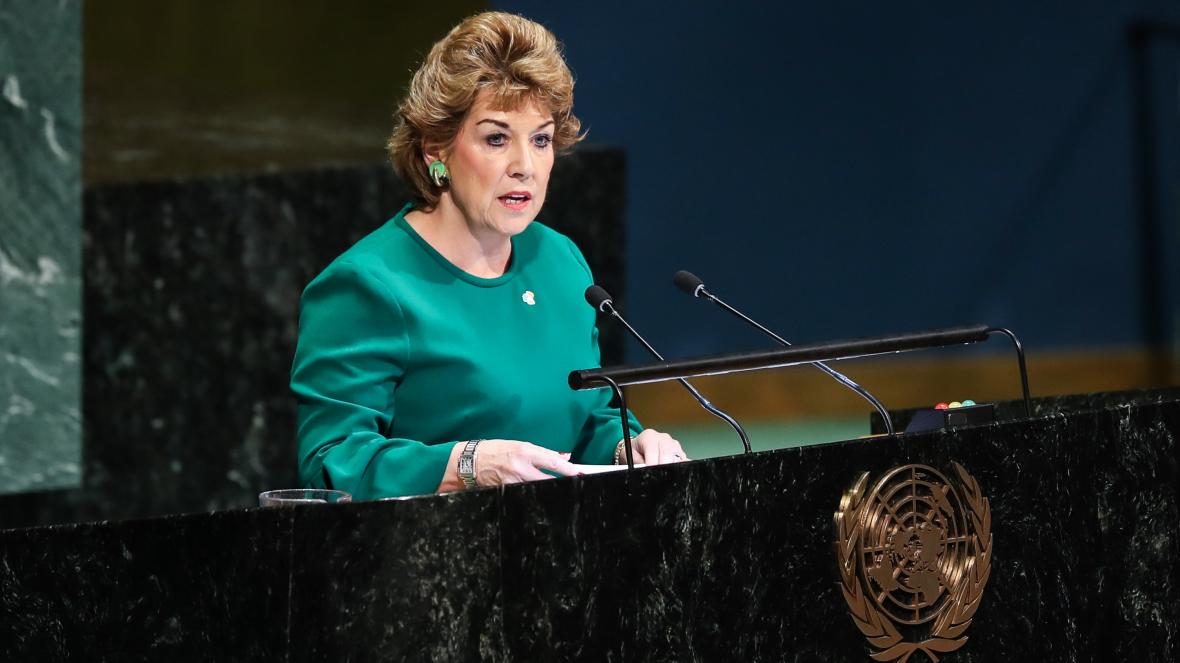 DUBLIN — Iran’s announcement that it will return to enriching uranium at the 20% purity level, which it last achieved shortly before the the Joint Comprehensive Plan of Action (JCPOA) was reached in 2015, came as a surprise to no one.  The Trump Administration’s abject foreign policy failures with Iran are abundantly clear.  In hoping to starve Iran into submission by withdrawing from the JCPOA, re-imposing sanctions on Iran, promoting greater cooperation between Israel and Saudi Arabia, assassinating General Qasem Soleimani and as recently as this past week deploying B-52 bombers and an aircraft carrier into the region in an attempt to intimidate Iran have not only failed to achieve any of US President Donald Trump’s stated objectives, but have threatened to bring the region to the brink of a new war.  Iran’s Major General Hossein Dehghan warned Trump “not to turn the New Year into a mourning for Americans” following the flights and positioning of a US aircraft carrier in the Indian Ocean within close reach of Tehran.  Iran’s response in announcing renewed enrichment at the higher level and renewing its own remarkably bellicose language was as wholly foreseeable as it was regrettable which raises serious questions about what Trump hoped to achieve.

Given that Trump has less than 20-days left in office his overtly provocative conduct threatens to trigger the kind of military conflict that would embroil Americans for decades to come.  The danger is that Trump, who has proven himself to be a transactional thinker without adherence to any discernable policies or values other than those which have repeatedly proven to be driven by self-interest, even at the expense of America’s national interests and security, could create havoc that remains long after he leaves office.  If Trump orders an attack upon Iran, directly or indirectly, or his conduct provokes conflict, it would reintroduce US military engagement abroad in yet another ‘unwinnable conflict’, a position that runs afoul of Trump’s promised American troop draw-downs throughout the world, a cornerstone of his former appeal with his base of support.  Renewed conflict abroad would also run contrary to the expressed democratic desires of 81.3 million Americans who, having witnessed his litany of Presidential failures, especially in the area of foreign policy, decidedly used the ballot box to turn Trump out-of-office.

Prior to Trump withdrawing the US from the JCPOA, and coercing the rest of the Western world to follow suit by threatening sanctions against anyone who continued to do business with Iran, the International Atomic Energy Agency (IAEA) confirmed, repeatedly that Iran had maintained its compliance.  Since then, having suffered renewed sanctions because of Trump’s unilateralism, Iran has incrementally and increasingly returned to significantly higher enrichment production, essentially returning the situation to a pre-2015 state despite the expenditure of enormous international efforts that were working.  There is broad international consensus that Trump achieved nothing in blowing-up the JCPOA and indeed injured US credibility abroad with its long-time allies and friends.

Given Trump’s penchant for visiting retribution upon his opponents analysts fear the situation is pregnant with the possibility that Trump might attempt some misguided ‘pre-emptive’ strike against Iran to not only please his Israeli and Saudi allies but to look bold to his base, all while creating an enduring nightmare for President-Elect Joe Biden.  While this has proven appealing enough to Trump to last month ask the Joint Chiefs of Staff and National Security Council for military options to be deployed against Iran before he leaves office, none of it would serve America’s immediate or long-term interests as Iran’s intention to reach the 20% benchmark simply rolls-back the clock to the state-of-play in 2015 which was highly undesirable but was tolerable in the short-term.  There remains a brief window to renew the JCPOA, as Biden has declared is his intention, achieve America’s policy goal of keeping Iran from reaching nuclear weapons capacity and thereby stabilise the region.  The next 20-days will prove whether Trump will run-out-the-clock or either party will trigger a conflict that puts an interim diplomatic solution beyond immediate reach.

Now, as the first anniversary of the Trump-ordered assassination of Soleimani approaches, the world waits to see if Iran will use the anniversary to retaliate.  Pressure from both Israel and Saudi Arabia for Trump to attack Iran’s nuclear facilities in the waning days of his administration has only heightened concern that the situation is spiraling out-of-control.  Trump’s decision to deploy a ‘show of force’ in the region over the past week has only served to make matters even more unstable.  If conflict breaks-out the consequences will be significant far beyond the principle parties driving this conflict.

As Israel’s Government faces a fourth election in a year, and Saudi Arabia is still reeling in international circles from distrust engendered by its brutal dismemberment of dissident journalist Jamal Kashoggi, Trump’s advisors would do well to moderate his stated desire to use military force against Iran at this time.  The advantages of such an attack are abundantly dubious while the risks of unleashing asymmetrical retaliation by Iran for which the US is ill-equipped to defend against, either domestically or abroad, make the situation perilous.  President Kennedy’s sage inaugural wisdom to Americans, ‘Let us never negotiate out of fear. But let us never fear to negotiate’ seems more apropos than ever but may prove lost upon an American President who all too often has seemed ignorant of both history and its lessons.

In the meanwhile, provided calmer-heads prevail in deterring Trump from attacking Iran, sustained peace may well rest with Iran.  This in itself is troubling as Iran feels deeply injured by Trump’s unilateral withdrawal from the JCPOA, is confronting the US everywhere from Iraq to Syria and Yemen and is still smarting from what the UN Special Rapporteur on Extrajudicial, Summery or Arbitrary Executions have called Trump’s affront to international law with regards to the killing of General Soleimani last year.  We must all hope Iran exercises continued discipline and sees more benefit in negotiating a renewed JCPOA which will bring about sanctions relief than it does achieving short-term retribution.  Given internal pressures in Iran and an upcoming election, the tension to maintain the fealty of hardliners and the support of moderates inside Iran makes the balancing act precarious at best.

The UN, however, may still hold significant say in the resolution of this growing crisis.  It may prove providential that Ireland has just yesterday taken-up its tenure as a non-permanent Member of the UN Security Council.  Astute students of history are aware of the critical role Ireland played in the Suez Crisis, the Soviet invasion of Hungary and as a Security Council Member in resolving the Cuban Missile Crisis, bringing the US and Soviet Union back from the brink of global nuclear holocaust.  Ireland has consistently proven in the UN that small nations can carry great weight in international affairs. Given Ireland’s foreign policy programme, its long-term commitment to peacekeeping, and the deft and proven ability of Ireland’s Permanent Representative to the UN, it may be the right country, with the right leaders in place, at the right time, to propel an urgent resolution of this crisis.

Geraldine Byrne Nason, Ireland’s permanent representative to the UN, told the Oireachtas Foreign Affairs and Defence Committee this month that Ireland would “of course do everything it can” at the Security Council to preserve the Iranian nuclear deal.  To achieve this, Ambassador Byrne Nason may have to throw herself and Ireland’s prestige into the US-Iran crisis before Ireland can play what may be a pivotal role in de-escalating tensions and maintain the peace before helping to put the JCPOA back on-track.  Irish leadership at the UN, and its ability to collaborate with other States, is necessary to creating the breathing room for both Iran and the US to construct a new dialectic to replace the 41 years of hostilities that have served neither nation, nor the world.

Time will tell – and the clock is ticking.