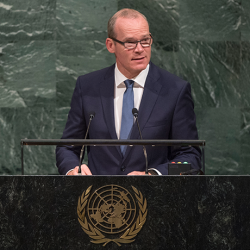 The Minister for Foreign Affairs, Simon Coveney T.D., today spoke at a UN Security Council debate to mark the 20th anniversary of the establishment of the UN Counter-Terrorism Committee (CTC).

Addressing the Council for the first time since Ireland took its seat on 1 Jan 2021, the Minister underlined Ireland’s prioritisation of protecting and promoting human rights during its Security Council term, saying:

‘Ireland has consistently argued that measures to combat terrorism must comply with international law, including human rights law, humanitarian law and international refugee law.  I say that because we know any other response will be ineffective, and indeed counterproductive.  Put simply, violations of human rights can contribute to radicalization and the growth of terrorism.’

Stressing the grave threat that terrorism continues to pose to international peace and security, the Minister highlighted the requirement to address the causes of terrorism.

‘The UN is uniquely placed to bring coherent approaches to issues including poverty, inequality and climate change, as well as to work in supporting effective governance including through capacity-building. Those tasks are key to countering terrorism.

The Minister also emphasized the importance of fully engaging women and young people in combating terrorism worldwide:
‘Today, I want to emphasize that I see the engagement of women and young people as fundamental to combating terrorism.  The full, equal and meaningful participation of women in the creation and development of policy is critical to building resilience and to countering terrorism. We will champion work in the Council on Women, Peace and Security.’

Ireland and other UN Security Council members approved a Presidential Statement at the meeting.

The UNSC adopted UNSCR 1373 in 2001 in response to the September 11 terrorist attacks. Ireland was a member of the Council at the time. The resolution targeted the organization and fundraising of terrorist groups and imposed legislative, policy and reporting requirements on Member States, including on law enforcement, border management, international cooperation, and terrorist financing. A key focus has been combatting Al-Qaeda and the Taliban, and more recently Da’esh.

The CTC includes all 15 members of the Security Council, monitors the implementation by Member States of UNSCR 1373, and helps them in tackling terrorism. The CTC and its Executive Directorate also facilitates constructive dialogue with UN member states to identify good practices, implementation challenges and/or gaps, and areas where technical assistance may be required.