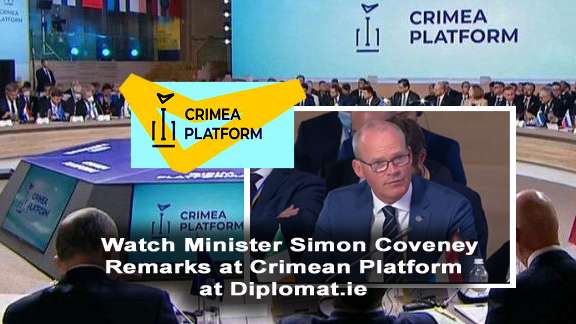 KYIV – In a brilliant piece of Statecraft, Ukraine’s President, Volodomyr Zelenskyy and his extraordinarily competent Minister for Foreign Affairs, Dmytro Kuleba, have managed to assemble more than 45 world leaders, including high level delegations from all 27 European Union member countries, along with all 30 NATO member countries along with more than 200 experts from more than 33 countries to gather in Kyiv as a show of solidarity against Russia’s illegal, temporary occupation and attempted annexation of Crimea.  With more than 370 accredited members of the world media watching, the opening remarks from each delegation were delivered, each condemning Russia’s abandon of a rules based world order and reiterating their unconditional commitment to the restoration of Ukraine’s sovereignty and internationally recognised borders.

Ireland’s delegation was led personally by Minister for Foreign Affairs Simon Coveney, T.D..   You can watch Minister Coveney delivering his remarks by clicking the image below:

While visiting Kyiv, Minister Coveney will also preside over the opening of the new Irish Embassy in Ukraine.  Ireland has elevated its bilateral relationship with Ukraine as part of the ‘Global Ireland’ initiative commenced in 2018.