Lessons of the Past Go Unheeded - Populist Appeal Prevails

by Editor
in Asia/Pacific, News & Analysis
0 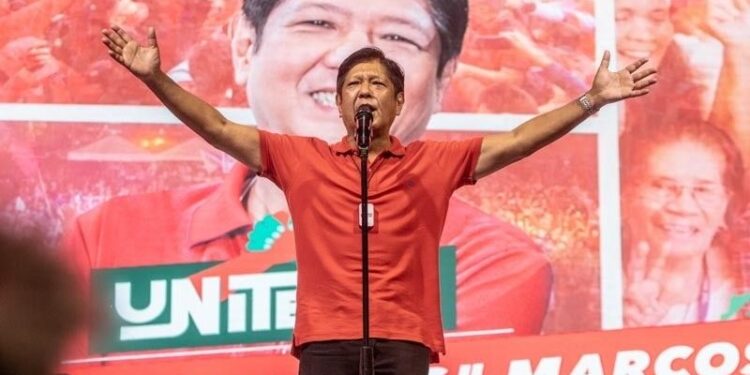 MANILA —Those who fail to learn the lesson of history are bound to repeat it.  Or so said Winston Churchill.  The election of Ferdinand ‘Bongbong’ Marcos as President of the Philippines underscores the sage observations of this axiom of history that quite often proves all too true.

With some 95% of the votes now counted, Ferdinand ‘Bongbong’ Marcos, Jr. has tallied about 30-million votes.  He currently leads the next closest contender, outoing Vice President Leni Robredo by more than twice the number of votes.  The Commission on Elections (Comelec) may not be able to report an official tally for several weeks.  Bongbong is the son of former Philippino President Ferdinand Marcos (1965-1986).  He is a former Senator.  “Even though the counting is not over yet, I cannot wait to thank all of you… to those who helped, to those who joined our fight, to those who sacrificed,” he said.

Albeit many of us are still alive to remember the brutal dictatorship of Ferdinand Marcos, for many Filipinos born after his despotic rule, revisionist history casts his time in office as prosperous if not heroic for the Philipines and her people.  This gross distortion of truth persists despite Marcos having amassed an estimated $30 billion in unexplained wealth while in office.  Marcos expertly plundered “discretionary” military funding the Philippines was given by the U.S. for sending its troops to Vietnam, employed a system of government kick-backs, skimmed money from government construction projects funded by the World Bank, misappropriated international funding and diverted foreign aid while in office.

In the aftermath of his tenure in office the Corozon Aquino instituted Presidential Commission on Good Government (PCGG) recovered some $3.26 billion of ill-gotten wealth from the Marcos family and their minions between 1986-2019.  Almost $26.7 billion remains unaccounted for to date.  Ferdinand Marcos died in Hawaii in 1989.  The PCGG has been all but eviscerated in its ability to do even more.

Despite the widespread theft of public funds while in office, and the notorious exposé of First Lady Imelda Marcos showing off her extraordinary shoe and handbag collection valued into the millions, Imelda Marcos was elected to the National Congress no less than 4-times after her husband left office.  That her son, Bongbong as he is affectionately known, has been elected President by a projected margin of over 16-million shouldn’t be surprising.  Filipino prosecutors and the judiciary, many appointed cronies of Ferdinand Marcos, have long resisted efforts to prosecute the Marcos family for their crimes.  Even the media has been resistant to reminding the public about the corruption that ran rampant under the Marcos regime.  The era was also marked by severe political oppression and the detention of political opponents and civil society actors – a thematic evil that survives to this day.

Bongbong has carefully crafted and nurtured his reputation and that of his family through the use of social media.  More than 92% of Filipinos use the internet daily outside of work, predominantly for accessing social media.  Marcos has long promoted a revisionist history of his family, creating slick documentaries that selectively presents a retrospective of his father’s Presidency, and the contributions of his mother in the National Congress, creating a romantic if not implausible yet desirable narrative for almost 3-generations whose memories do not extend to the past.

Presumably, Bongbong has employed the ill-gotten gains of his family’s time in office, some $26.7 billion by some accounts, in his public relations campaigns to promote his image and that of his parents.  Bongbong was charged and convicted with tax evasion in 1995.  However, a 1997 Court of Appeals ruling modified the Quezon City Court’s conviction by acquitting him of tax evasion but maintained his conviction for his failure to file Income Tax Returns between 1982 to 1985.  There is no record available to indicate he satisfied the judgement or paid fees and penalties imposed by the Court of Appeal.

Beyond Bongbong’s election being ascribed to his social media manipulation routine complaints about the enduring corruption in Philippine elections abound.  From purged election rolls favouring Marcos to malfunctioning voting machines,missing ballots, ballot tampering, corrupt or missing electronic backups and the use of intimidation by gunshots and hand grenades killing at-least 5-people, the election has all the hallmarks of the Marcos elections of old.  Traditions in the Marcos family, it seems, die hard.

Bongbong’s mandate is writ large.  With more than 15 million votes separating him from the next candidate, outgoing Vice President Leni Robredo, a Filipino politician with a rare reputation for public integrity, Marcos will enjoy little real opposition.  Combined with his pledge to indemnify outgoing President Duerte from accusations of summary execution in his long-running campaign against purported drug-dealers, Bongbong seems assured of public support, at least for the time being.  Such a proposition is bolstered by the election of Sarah Duerte Carpio as Vice President.  Duerte Carpio is the daughter of the outgoing strongman, Rodrigo Duerte who served as President who left only because of Constitutional term-limits.  He is currently under investigation for his role in systematic human rights abuses including summary executions.

The blood-laden ‘People Power Revolution’ that saw the Filipino people turn-out Ferdinand and Imelda Marcos some 36-years ago now seems a distant memory in the Philippines today, if it is remembered at all.  Also seemingly forgotten is the 21-year litany of human rights abuses,  detention of political opponents and the widespread corruption for which the Ferdinand and Imelda Marcos regime is remembered internationally, even if not domestically.  The corruption of the Duerte era may well continue given his campaign pledges and having Sarah Duerte Carpio filling the office of Vice President.  The commanding electoral mandate given to the Marcos’ son, Bongbong, relegates the People Power Revolution and Presidential Commission on Good Government to be all but artefacts of the past.