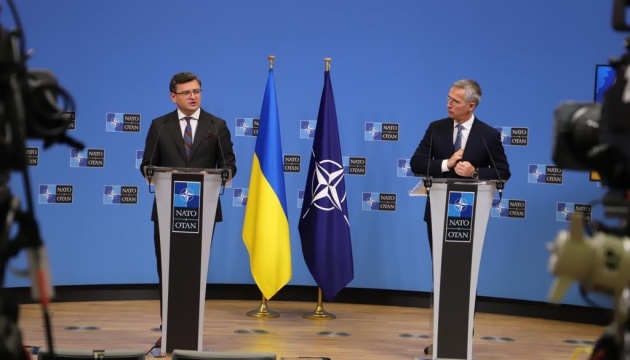 BRUSSELS – Russia continues to amass an alarming number of combat troops, heavy armour, artillery and logistical support units near the Ukrainian border.  These reports have been verified by multiple nations’ intelligence services, NATO, satellite images and civilian eyewitness images and videos captured on mobile phones then shared widely on the internet.  In a move starkly reminiscent of the build-up before their invasion of Donbas in un-marked uniforms and equipment earning them the moniker “little green men,” Russia is creating a provocative threat to Ukraine and Europe’s security.  More than 13,000 Ukrainians have died since Russia’s invasion and temporary occupation of Donbas and Crimea in 2014.  Far from a stalemate, Ukrainians continue to die almost daily from continued Russian breaches of a ceasefire agreed with the help of the European Union.

Yesterday, Germany and France has issued an unequivocal declaration of support for Ukraine – and a stark warning for Russia – after meeting with Ukrainian Foreign Minister Dmytro Kuleba:

Germany and France have attempted to resolve the issue of Russia’s temporary occupation of Donbas and illegal attempt to annex Crimea in what has been dubbed “The Normandy Format” along with Ukraine and Russia.  The negotiations have ground to a halt for the past few years as Russia continues to refuse to engage constructively or even meet.  Despite efforts by France, Germany and Ukraine, any chance of resolution has been thwarted by Russia’s refusal to be guided by international law and depart Ukraine and restore her internationally recognised border.

The call for “transparent information” by France and Germany is noteworthy as Russia continues to refuse to comply with their obligations to allow independent observers, such as the OSCE to do their jobs.  Russia also prohibits independent inspection or observation by third parties of their prison system, now considered a ‘modern gulag’ in which Ukrainians are illegally detained, charged with crimes under Russian laws and transported to Russia.  Of particular concern is the plight of the Crimean Tatars, the internationally recognised indigenous people of Crimea who have been subjected to intense persecution, confiscation of property, arrest and trial without due process, forced disappearances and even summary execution.  In interviews, social media communications and written statements, the leadership of the Crimean Tatar community routinely reminds the world, “Crimea is Ukraine”.

Belarus Threatens Ukraine’s Northern Border
The machinations between Alexander Lukashenko (the Belarusian strongman who usurped an election from Svitlana Tsikhanouskaya, whom is widely acknowledged to have been rightfully elected the President of Belarus in last year’s elections) and Russia’s Vladamir Putin have now created a deadly humanitarian crisis on the Ukrainian and Polish borders.  Beginning 8 November, thousands of people that had been transported to Belarus through Syria, Iraq and other primarily Middle Eastern destinations only to be transported by Belarus military vehicles to the Polish border, has caused significant humanitarian, immigration and safety concerns for all of Belarus’ neighbours.  In the frigid winter cold there are already reports of deaths by exposure.

While Poland is facing a pressing problem with the throngs of migrants attempting to cut through the frontier barricades, being urged-on by a sophisticated disinformation campaign attributed to Russia and Belarus promising migrants that Poland will create a, “safe-conduct corridor to Germany,” migrants now find themselves freezing to death, hungry and unable to care for their children having been ‘instrumentalised’ (or, as some put it, ‘weaponised’) to threaten Poland and Europe’s security with illegal immigration.  Syrians and others at the border have taken to social media to describe how they received cash and paid flights to travel to Belarus with the promise of being “escorted” across the border into the European Union.

For Ukraine, the situation on the Belarus border is more than an immigration problem, it is existential in nature.  Credible reports are that Russia is attempting to exploit the migrant crisis to facilitate military and intelligence personnel entering Ukraine in an attempt to further destabilise the government in Kyiv and spread fear and concern amongst the Ukrainian population.

Ukraine’s Foreign Ministery, Dmytro Kuleba, spoke to the dual threat of confronting the prospects of further Russian aggression being timed with the border problems enflamed by the Belarus regime during his consultations in Brussels:

“I would like the Belarusian leaders to be more friendly to Ukraine so that we can see the northern flank as a safe place but, unfortunately, this is not the case,” remarked Kuleba during a joint press briefing with NATO Secretary General Jens Stoltenberg in Brussels.

Noting the strategic danger of possibly having to confront a growing immigration threat to the northern border of Ukraine while facing the prospect of preparing to once again defend itself from the growing prospect of further Russian incursions across Ukraine’s internationally recognised borders, Kuleba restated Kyiv’s commitment to preparedness with their European and transatlantic partners, “But I want to assure you that the Ukrainian Government is doing everything possible, taking all measures, cooperating with the closest partners to bolster our defenses on the northern flank, to make sure that our country is protected from all sides,” he said.

Turkish Airlines, one of the main international carriers flying to Minsk, suspended one-way ticket sales for Middle Eastern migrants seeking to reach Europe via Belarus, the European Union’s executive said on Friday.  Only those holding valid diplomatic credentials will be able to purchase such tickets for the foreseeable future.

Iraqi Airlines has also said it will not fly to Minsk, the Commission said, after top EU officials began talks with Iraq, Lebanon, United Arab Emirates and Turkey to try to stop migrants being encouraged by Belarus to come to the EU.

According to a European Commission spokesperson, “These contacts are already showing fruit.  Iraqi Airlines has confirmed that it will not resume flights to Minsk, and Turkish Airlines will also suspend sales of one way tickets to Minsk from Turkey.”

According to the official Twitter account of the Turkish Civil Aviation Authority, a decision was taken to resolve “the problem of illegal border crossings between the European Union and Belarus [until further notice]”.

Russia and Belarus Accelerate Integration
Belarus and Russia have re-affirmed their compact by approving 28 ‘Union Programs’ that will ostensibly integrate the two countries.  Putin and Lukashenko finalised the agreement following talks in the Kremlin on 9 September and on 4 November signed the Agreement officially approving the programmes.  Belarus, which will this week face renewed and expanded sanctions by the European Union, is increasingly reliant on Russia and Putin’s largesse.

Note:  Diplomacy in Ireland – The European Diplomat has received ‘in-kind’ sponsorship from Turkish Airlines.  Such support plays no role in reporting or editorial decision-making.