The Dangers of a Complex World of Putin's Own Making 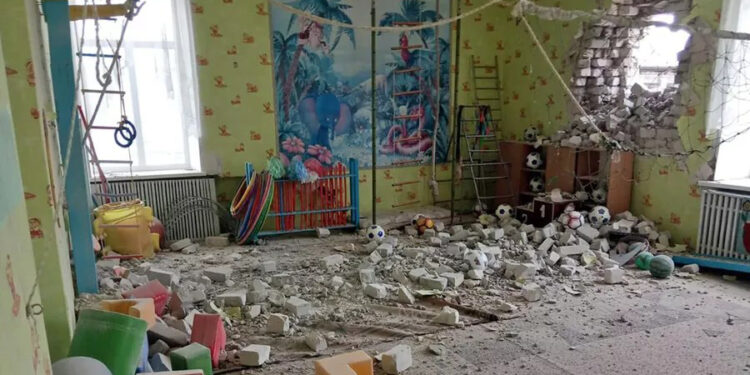 DUBLIN — Earlier today images of a pre-school that had been destroyed by artillery fired by Russian controlled forces were splashed across the media.  Amazingly, while 2-teachers were injured, the children escaped relatively unscathed.  It is yet another example of how ‘Little Green Men,’ the Russian forces and irregular military units under Russia’s effective control who stormed and have occupied Crimea, Luhansk and Donetsk since 2014 (widely confirmed to be regular Russian forces through facial recognition and their own social media posts despite Kremlin denials) routinely breach the ceasefire agreements that form part of the Minsk Agreements.  Russia has refused to cooperate with monitoring missions and have denied the OSCE and independent observers access to Ukrainian territory under their armed control, forcing them to leave for their safety.  The ceasefire routinely kills and wounds Ukrainian troops and injures civilians along the contact line.

Russia denies they were responsible for the shelling of the pre-school.  Russian denials are routine, despite multiple sources that verify their ongoing breaches of the Minsk Agreements.  So far, more than 14,000 Ukrainians are dead and 1.5 million Ukrainians have been internally displaced because of Russia’s armed invasion and temporary occupations in Crimea, Luhansk and Donbas.

The shelling of a pre-school, however, in the context of the current build-up of forces threatening Ukraine, coupled with Russian Federation President Vladimir Putin’s wild demands for NATO to roll back its membership to 1997 levels, exclude all former USSR and Warsaw Pact members and permanently deny Ukraine a membership path to NATO makes today’s shelling different.  In this highly charged atmosphere the ferocity of such an attack on such vulnerable children could mean many things.  Is it a modern repeat of the Gleiwitz incident in which German Wehrmacht dressed as Polish soldiers in a ‘false flag‘ operation to give justification to invade Poland in 1939, setting off World War II?  Was it some local artillery unit not following orders?  Or, was it a ‘lone wolf‘ operation meant to ignite the powder kegs Russia has placed all around Ukraine’s borders?

In the last scenario, a zealot ‘lone wolf‘ serving in the local militia under Russian control may feel the need to create a pretext for war.  As mad as it sounds (it is truly mad), such a person would launch an attack upon Ukraine (it has done with regularity in the past), hoping Ukraine would retaliate.  Such a retaliation would, of course, require a response and the shooting war would be well under way.  A so called ‘separatist‘ might see such a scheme as the best way to force the Kremlin’s hand to fully occupy and annex Luhansk and Donetsk in a full-out military commitment in a kind of ‘low-budget Dr. Strangelove scenario where a wild-eyed pilot brings the world to a full-scale, nuclear, retaliatory response‘.

During the Cuban Missile Crisis both Chairman Nikita Khrushchev and President John F. Kenney grappled with just this scenario.  Both men had served in World War II and knew how an individual could change the course of history with a small act that spoke loud on the world stage.  Both Khrushchev and Kennedy knew they could control the Generals under their command but each were acutely aware the soldiers in the trenches could act with little or no supervision and thereby drag the world into war.

A short history lesson is required as the media and ill-informed politicians continue to ask if Ukraine is somehow co-responsible for the current tensions by “threatening Russia with NATO membership hopes“.

Russia has never had reason to fear Ukraine.  Ukraine remains the only nuclear power in the world to put its nuclear arsenal beyond use as they did, voluntarily, in the Budapest Memorandum in exchange for security guarantees (which Russia has never honoured – and I don’t see Putin pounding his swords into plowshares).  From the foundations of their newly independent State, Ukrainians passed the Declaration of State Sovereignty of Ukraine on July 1, 1990, which declared the “intention of becoming a permanently neutral state that does not participate in military blocs and adheres to three nuclear free principles…” (Declaration of State Sovereignty 1990: Art. IX).

Even the Ukrainian Constitution, which was rooted in the Declaration of Independence of August 24, 1991, contained 3-principles of non-coalition and future neutrality.  It remained this way until Putin ordered Russian forces to seize and attempt to illegally annex Crimea; and invade and occupy Luhansk and Donetsk in 2014.  If Putin feels “threatened” because it was only after Russia invaded Ukraine did it seek NATO membership, he needs to come to a sharp reckoning that it is a situation of his own making and Ukraine’s NATO aspirations are entirely defensive, understandable and justifiable in light of Russia’s aggression.

It is entirely within the gift of Putin to call for a genuine draw-down of forces bordering Ukraine.  Such a drawdown needs to be immediate, comprehensive and verifiable and not just another propaganda announcement that defies confidence building let alone defies confirmation.  It is Putin who put the largest field army assembled in Europe since World War II on Ukraine’s border.  It is Putin who has used this moment to effectively re-occupy Belarus and extend his threat to Ukraine’s northern, and Poland’s eastern border.

And contrary to last week’s online pandemic experts who have morphed into this week’s online security analysts who entertain Putin’s unfounded claims, it is not NATO who has encroached upon Russia.  It is Russia that drove then officially and legally neutral Ukraine to seek NATO membership in 2014 after he invaded and occupied the very sovereign territory of Ukraine Russia pledged to recognise and defend in the Budapest Memorandum.  It is Russia who has encroached upon NATO and Europe in its never-ending territorial grabs-by-force in Moldova’s Transnistria, Georgia’s Tskhinvali Region and Abkhazia and of course, Crimea, Luhansk and Donetsk.  It is Russia who poisons Europeans using banned chemical weapons and guns down refugees in Berlin Parks on “State orders” according to a German Court in December, and Russia who poisoned and imprisoned the leading opposition figure for simply wanting free and fair elections.  According to Ian Robertson, Ph.D., of Trinity College Dublin, Putin’s isolation from the public and almost spiritual sense of self-imposed destiny makes him likely to yet again use force to obtain his goals.  Putin is the master of this madness and only he can de-escalate the crisis of his own making.

If another pre-school is shelled, another farm destroyed or Ukrainian killed, or Europeans are forced to spend billions more defending themselves from Russia’s perpetual and growing threats all while those funds are needed for roads, schools, hospitals and education at home, there is only one actor responsible – Vladimir Putin.