How it Ends and At What Costs Remains Uncertain 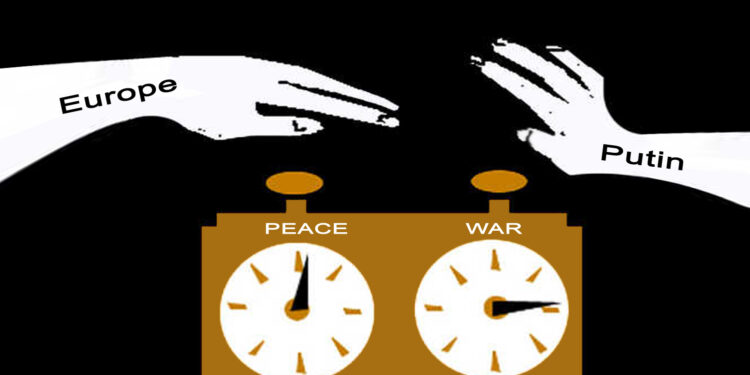 DUBLIN — Europe has all the hallmarks of an 18th century naval battle.  Tightly grouped armadas have all of their forces tightly packed into a single formation ready to be deployed into a line of battle.  Gun crews are busying themselves cleaning cannons, powder monkeys have wet their sleeves to keep them from being set alight and the surgeon is busy spreading sand on the floor to soak-up what will undoubtedly be a bloody mess.  All the while commanders communicate in rapid semaphore waiting for word from any ship on the horizon if it will be peace or war.

And yet while these ships-of-the-line are facing-off on some grid-square of water on the high seas, their capitals still must look at the globe and worry about their far-flung interests are regional conflicts on the verge of mutiny.  And this is the predicament in which Europe now finds itself today.  While the Russian Federation’s Vladimir Putin has commanded all eyes and resources upon his latest threat, and he keeps the world guessing with mixed-messaging meant to confound diplomats and analysts alike, there are dark clouds on the horizon and Europe is not shortening sail or battening hatches.  It is as though the watchmen in the crow’s nest seem incapable of looking at any threat except that of the armada in their immediate sight and have left their fleet at danger of being flanked by corsairs just off the horizon.

Despite the development of sophisticated, if not somewhat Byzantine structures, the EU should be able to monitor the ever-changing world and respond accordingly.  And yet it is undeniable that in amassing the largest military-threat to European peace and stability since World War II, Russia continues to demand everyone’s attentions.  A look at the social media feeds of EU leaders and EC Commissioners tells you all that you need to know – from food security to economic chaos and from trade to transportation – the Kremlin’s manufactured casus belli (not one, but many and constantly evolving) is consuming Europe’s time, talent and treasure.

Without adjusting for the exceptional cost of keeping units in the field, even a simple pro rata calculation of the Russian Federations spending on equipping a single soldier for field duty would place the total estimated cost of fielding the Russian forces threatening Ukraine at €499,320,000.   While impressive, it is hardly the beginning.  The daily costs of field tents, temporary buildings, maintenance sheds, expendables, food, medical care and other ancillary costs would be in addition.  And yes, then there are the rifles, pistols, mortars, artillery, missiles, anti-aircraft systems, communications gear, ambulances, jeeps, trucks, armoured personnel carriers, tanks, helicopters, gunships, heavy payload aircraft, bombers and fighters, not to mention the ships that are currently on their ‘gunboat diplomacy’ world tour.

Even the roughest of estimates would place the cost of keeping the largest combat force in Europe assembled since World War II at least at approximately €4,161 per soldier, per day.  Even my simple math would tell me that Putin is spending a staggering €540,930,000 per day to threaten Ukraine’s existence and Europe’s future.  This is, of course, largely in addition to the €4.82 billion per annum Russian defense budget.

This leads me to some general calculations as to timing.  Putting aside moments of unanticipated tactical opportunity, changes in weather, etc., Putin can only carry the costs of maintaining his military threat against Ukraine and Europe for a limited period of time.  He must also contemplate domestic disturbances who will take advantage of Putin having drawn-down regional force levels to marshal them along Ukraine and re-occupy Belarus.  Another Kazakhstan moment within the Russian Federation or its proximity partners might risk an internal disruption that he might find frightening (all despot leaders fear being overthrown from within).  Then there is the cost of keeping troops in the field and its exponentially deleterious effect on their combat readiness.  Field rations are high in calories and muscle turns to flab when eaten for too long (not to mention morale diminishes greatly).  Equipment rusts.  Machines break-down.  And to be frank (ask any old soldier), wearing the same pair of knickers day-after-day while living out of a field bag without regular laundry facilities and shaving with ice-cold water makes for a grumpy, tired and significantly less combat effective force.

Between money and the inevitable combat readiness decay that accompanies keeping troops in the field, Putin’s calculus has already indicated to him when his ‘use it or lose it’ moment is.  Even with my rough math I can guess, but only Putin knows.

In any event, the true costs to Russia and Europe will be calculated by the people conversant with ledgers after all is said and done, whatever happens.  Europe should, however, remain acutely concerned about the long-term cost of taking its focus off continuing and emerging world conflicts.  Throughout Africa, a continuing emergence of authoritarian regimes (which has been occurring with disconcerting regularity) remain unaddressed.  The nightmarish humanitarian crisis in Afghanistan and refusal to deal with the Taliban is already threatening regional stability and will cost millions of lives through disease and starvation.  The reinstatement of the JCPOA (which will require Russia’s participation) remains uncertain and sunset clauses will make more of it meaningless with further delay.  The worsening Israel-Palestinian conflict (last week the Palestinian Central Council announced a non-recognition stance of Israel – a major and foreboding shift that has largely gone without notice or comment in the West) remains perpetually unresolved.  Myanmar has become a cesspool of Tatmadaw human rights abuses.  Belarus continues its brutal repression of the democratic hopes and fundamental rights of its people while maintaining what is tantamount to a gulag system replete with torture.  North Korea is launching increasingly accurate long-range missiles on an almost weekly basis. Taiwan is under threat… I need not go on.

With Putin spending billions to threaten Europe (yes, Ukraine is part of Europe and has been for over a millennia), Europe is being forced to spend what we once called a ‘peace dividend’ on militarisation for defense and survival.  Our economies are being injured.  Food security may cease to exist if Ukraine falls (32 million hectares of Ukraine’s black soil are cultivated annually – an area larger than Italy – well earing it the nickname, the ‘Bread Basket of Europe’).  What European country has funds for the demands of infrastructure repair, maintenance and upgrades?  Is there any Minister of Finance in Europe complaining their exchequer has a surplus not needed for medical services, care for our increasingly greying populations, pension stabilisation or educating Europe’s youth?  And while Europe take our eyes off a decaying world, what price will have to be paid for the flood of refugees from Africa, Afghanistan and elsewhere that must flee because Europe’s resources and attentions were spent elsewhere while their countries devolved into chaos?

Europe’s badly needed resources are being daily being consumed not for humanity’s benefit – but to ensure our survival in the face of Putin’s insatiable appetite for power and dominion over what he deems his and Russia’s rightful claim on broad swaths of Europe.  Continuing to placate him has only invited new and larger demands.  We must break the cycle.  Maybe its time to allow Putin to bankrupt his own treasury.  The danger remains, however – ‘Will Putin attack Ukraine and Europe to justify his grotesque expenditures’?  Or, ‘Will European unity cause his to either pull-back or face self-immolation from overspending and bringing about his own demise‘?

All we know is that Putin has done his sums and knows when this will end.  The question remains unanswered as to how it ends and at what cost.

What Is It Regan Said? ‘Trust But Verify’?