Russia's Threat to Ukraine and European Security at Issue 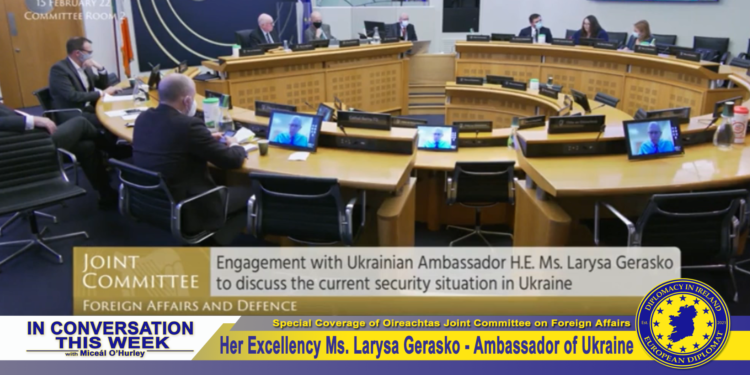 DUBLIN —  You can watch our special coverage of the Houses of Oireachtas Joint Committee on Foreign Affairs & Defense with Her Excellency Ms. Larysa Gerasko, Ambassador of Ukraine to Ireland.  Ambassador Gerasko appeared before the Committee on Tuesday, 15 February 2022 to address concerns over Russia’s latest threats to Ukraine’s independence and European security.

Her Excellency Ms. Gerasko’s written submission to the Committee also appears below (check against delivery).

Statement by Ms Larysa Gerasko, Ambassador of Ukraine to Ireland,
at the session of the Joint Committee on Foreign Affairs and Defenсe of the Oireachtas
(Dublin, 15 February 2022)

I am honoured to be here today for the first time and address the distinguished members of the Joint Committee on Foreign Affairs and Defence on the threats that the Russian Federation poses to Ukraine and Europe in its entirety.

Before I turn to my remarks, let me, on behalf of the Government of Ukraine, extend the words of appreciation for Ireland’s support that we are receiving at this unprecedently challenging time for my country.

Ireland has always been a reliable partner of Ukraine both on bilateral level and in international fora. We successfully cooperate on a number of UN resolutions, including those on human rights in Crimea, militarisation of the peninsula and the security situation in the Black and Azov seas.

We are also grateful to Ireland for its advocacy efforts in the UN Security Council. The strong statements delivered by the Irish diplomacy within this body for the sovereignty, territorial integrity and independence of Ukraine are unambiguous and of utmost importance for us.

Ireland’s non-recognition policy of the illegal occupation of Crimea that is also included into the Programme for Government “Our Shared Future” is yet another demonstration of its unwavering stance in this respect.

On 23 August 2021, two major events took place in Kyiv. The first one was the Inaugural Crimea Platform Summit attended by all EU member states, including Ireland, represented by H.E. Foreign Minister Simon Coveney. The Summit is an important first step towards the de-occupation of Crimea aimed at returning the Peninsula to the area of the rule of law and respect for human rights under sovereignty of Ukraine.

The second milestone event was the opening of the Embassy of Ireland to Ukraine that has provided new opportunities for strengthening bilateral ties.

It is my duty and need to fully update you on what is going on in the temporarily occupied territories of Ukraine in Crimea and Donbas, as well as along the border of Ukraine, where the Russian Federation continues its military build-up.

For the 8th consecutive year, Ukraine has been countering external armed aggression from its neighbour. About 7% of the territory of Ukraine remains under foreign occupation in blatant violation of the UN Charter and international law. Over 14 thousand people killed, more than 30 thousand wounded and over 1.5 million of internally displaced persons – these are the consequences of this aggression, which Russia sells to the world as so-called “internal conflict in Ukraine”.

We also keep the memory of 298 passengers of MH17 flight, including one Irish national, killed as a result of the terrorist attack on 17 July 2014, when the plane was shot down by the Russian servicemen using BUK missile system.

Unfortunately, the facts indicate that Russia is intending to continue its odious policy of hatred. According to the latest estimations, the Russian contingent of armed forces is totalling nowadays about 119 thousand troops (72 battalion tactical groups) amassed around Ukraine’s borders and in Crimea (tanks – up to 1700 units, armoured vehicles – up to 4300 units, artillery systems and mortars – up to 2300 units). In this connection, Ukraine, in accordance with provision 16.1 of the Vienna Document 2011 on Confidence-and Security-Building Measures, requested the detailed explanation on the objectives of the military activity conducted in close proximity to the state border of Ukraine and in the temporarily occupied Crimea. So far, Russia refuses to explain its actions and military movements in a transparent manner and has made no trustworthy move to withdraw troops.

We are worried by coincidence in time and place of the above-mentioned build-up of Russian forces at the Ukrainian border with joint Russian-Belarusian operational drills “Allied Resolve-2022” in the territory of Belarus (active phase to be held on 10-20 February 2022) and the massive Black Sea drills, which assembled almost a third of all acting warships of the Russian Navy including numerous landing crafts.

Overall, the Russian Defence Ministry announced the conduct of the navy military exercises simultaneously in the Mediterranean, North and Okhotsk Seas, in the Pacific, as well as in the Atlantic, sabre-rattling and threatening even countries with traditional military neutrality.

Another alarming trend is a significant reinforcement of combat capabilities of the Russian occupation forces in Donbas. Currently, these formations consist of up to 35,000 personnel, including around 3,000 servicemen of the Russian Armed Forces on command posts and in other critical combat positions.

Russia`s decision not to extend the mandate of the OSCE Border Observer Mission at the Russian checkpoints «Gukovo» and «Donetsk» shows that Moscow’s main interest inheres in the use of its sole control over both sides of the 409 km segment of the state border between Russia and Ukraine, in order to unimpededly keep supplying weapons, military equipment, ammunition, regular troops and mercenaries to the temporarily occupied parts of Donetsk and Luhansk regions of Ukraine.

Despite the fact that on 22 December 2021 the Trilateral Contact Group (TCG) reached another understanding on resuming the ceasefire regime, shootings, shelling, sniper fire on Ukrainian positions, and systematic use of attack UAVs against Ukrainian troops have not ceased. Meanwhile, freedom of movement of the OSCE Special Monitoring Mission continues to be restricted in the nongovernment-controlled territories of Ukraine. These realities are recorded in the numerous reports of the Mission and are made publicly available on the Mission’s website.

We consider utterly unacceptable any withdrawal of SMM personnel by seconding states at this critical moment since Moscow might use it as ground for shutting the SMM down. Thus, I urge Ireland to keep its mission members that are already on the ground and even to look into the possibility to strengthen the SMM by increasing the number of the monitors.

To our deep sorrow, since 22 December 2021 6 servicemen have already been killed in action and more than 19 servicemen have been wounded. Most recently, on 25 January, the illegal armed formations of the Russian Federation once again attacked the positions of the Armed Forces of Ukraine in the area of Pyshchevyk, Donetsk region, using an UAV. VOG-17 fragmentation grenades dropped from that UAV resulted in severe injuries to two Ukrainian servicemen. And then on 2 February, the same firing was recorded in the entry-exit checkpoint near Hnutove, Donetsk region, which serves as a humanitarian corridor.

No surprise, then, that Russia refuses to take meaningful steps to launch new entry-exit checkpoints, although Ukraine has made all the preparations for the opening of “Zolote” and “Shchastya” checkpoints in line with the decision of the “Normandy Four” leaders reached in Paris on 9th December 2019. But the Russian Federation put forward a demand to recognise the Russian “Sputnik V” vaccine and COVID certificates as the precondition for their opening.

The prospect of a mutual release of the conflict-related detainees has also come to a halt, despite the previous agreement on this matter and numerous requests from Ukraine, as well as lists of the illegally detained persons for the exchange submitted by our delegation in the TCG to the Russian side.

All this is accompanied by Russia`s stubborn denial of being a party to the armed conflict, attempts to impose a so-called “direct dialogue” with its puppet occupation administrations and refusal to engage in substantive discussion to implement a peaceful solution to the conflict.

Russian aggression has not only the military but also economic and financial dimensions. Russia is investing enormous efforts to undermine economic and financial stability in Ukraine. Another proof of this is Russia’s decision to hold military drills in the Black Sea region, while in parallel disabling the international navigation and fisheries in Black and Azov seas and the Kerch Strait. Such activities also block access by merchant vessels to / from the Ukrainian ports.

We have already initiated contacts with our partners, including those in the Black Sea region, in order to ensure that Russia’s aggressive actions that are part of its hybrid warfare against Ukraine receive an appropriate international assessment and response. We also remain in close contact with the partners to explore new ways of additional support to ensure economic and financial stability in Ukraine.

It is obvious that Russia’s latest actions are aimed not against Ukraine only but can be viewed in a much wider context. Russia uses gas, including “Nord Stream 2” project, as a weapon to aggravate the energy crisis in Europe. It used migrants as a weapon to escalate tensions on the Belarus border with Lithuania and Poland. On top of that, it increases cyberattacks in an attempt to destabilise the domestic situation in Ukraine and beyond. All those elements are part of Russia’s plan to seriously destabilise Europe. In the worst-case scenario, Russia may try to undermine the entire post-Cold War security architecture in Europe and redraw borders in Europe by force again, as it already did in 2008 in Georgia and in 2014 by occupying Ukraine’s Crimea and unleashing the war in Donbas.

We also see a surge in Russian disinformation campaign, including false accusations of Ukraine plotting a military attack in Donbas. Let me reiterate: Ukraine does not plan any military offensive in Donbas. We are committed to seeking political and diplomatic solution to the Russian-Ukrainian armed conflict. Ukraine wants peace, security and stability not only for itself, but also for the entire Europe. Together with additional military support from our Western partners as well as with increased diplomatic and economic pressure on Russia, Ukraine is ready to defend itself.

We are willing to keep diplomatic engagement with Russia on various tracks and in various formats. We are ready to resume N4 talks in all formats, including at the level of the leaders and foreign ministers. The Political advisers` meeting on 26 January in Paris showed many differences in parties` positions concerning the implementation of the Minsk agreements. At the same time, the consultations showed the potential for further dialogue on the settlement of the Russian-Ukrainian international armed conflict. Regretfully, during their most recent meeting and on 10 February in Berlin, these differences persisted, and no agreement was reached an any documents or statements. Yet, the participants of that meeting expressed determination to meet again following a next session of the TCG.

To conclude my remarks, I would like to stress again that Ukraine is committed to justice, peace and security not only for itself but for the whole of the Euro-Atlantic community. The future of the global security architecture is being decided in Ukraine, and the ability of the coalition of the democratic states to take on the current threats and challenges in Ukraine will have a direct impact on their own future.

We count on continued pressure on Russia from our partners. We need a clear message that the Kremlin’s plans will not work, and continuation of aggression will be met with a devastating response from the West and multiplied support for Ukraine.