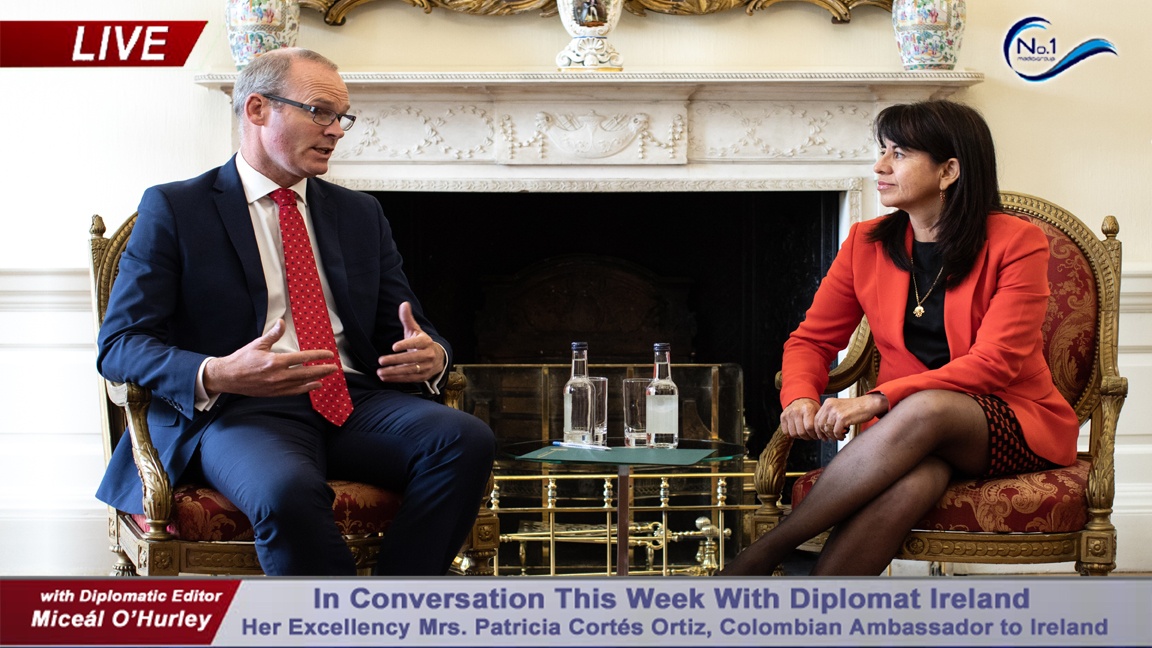 DUBLIN – In an effort to meet consumer’s demand for greater accessibility to our coverage we are launching a new programme, ‘In Conversation This Week with Miceal O’Hurley‘.  The video series will interview members of the Diplomatic Corps, Government, Ministries, NGOs and others to help our audience better understand diplomacy in Ireland.

Our first guest was Her Excellency Mrs. Patricia Cortés Ortiz, the Ambassador of the Republic of Colombia to Ireland.  Ambassador Cortés Ortiz is Colombia’s first resident Ambassador to Ireland following over 20-years of bilateral relations with Ireland.  During the interview Ambassador Cortés Ortiz discusses the challenges and joys of opening a new Embassy, travelling Ireland with her family, Colombia’s history with Ireland, bilateral relations, trade, commerce and the already rich tradition of cultural exchanges between Colombia and Ireland.  Beyond domestic affairs, which includes the 2016 Colombia peace accord with Fuerzas Armadas Revolucionarias de Colombia (FARC), which led an armed paramilitary conflict for over 50-years before surrendering their weapons, which is seeing them experience political, social and economic reintegration as part of the peace efforts, Her Excellency also address the multidimensional humanitarian crisis in Venezuela which has seen more than 1.8 million refugees migrate into Colombia in just the last 3-years.  Questions about tourism and the unique Colombian ecological heritage were also addressed (Colombia contains 10% of the entire world’s eco-diversity).

Ireland opened a new Embassy in Bogotá in 2019.  Ireland’s first Resident Irish Ambassador to Colombia is Her Excellency Ms. Alison Milton.  Ireland’s presence in Colombia dates to back to Simón Bolívar and the Independence campaign when 1,000 Irish volunteers left Europe in the 19th century under the command of the Cock-born General Daniel Florence O’Leary (1801- 1854). “We have a very long history with Colombia,” says Ambassador Milton, recalling one of Bolívar’s closest confidants and well-known figure in Colombian history. The opening of an Irish Embassy in Bogotá was, therefore, the Ambassador explains, “in the offing for some time” and a decision that comes as Ireland expands its missions’ network across Latin America.

Part III of an Exclusive, 3-Part Interview with His Excellency Dr. Masoud Eslami, Ambassador of the Islamic Republic of Iran