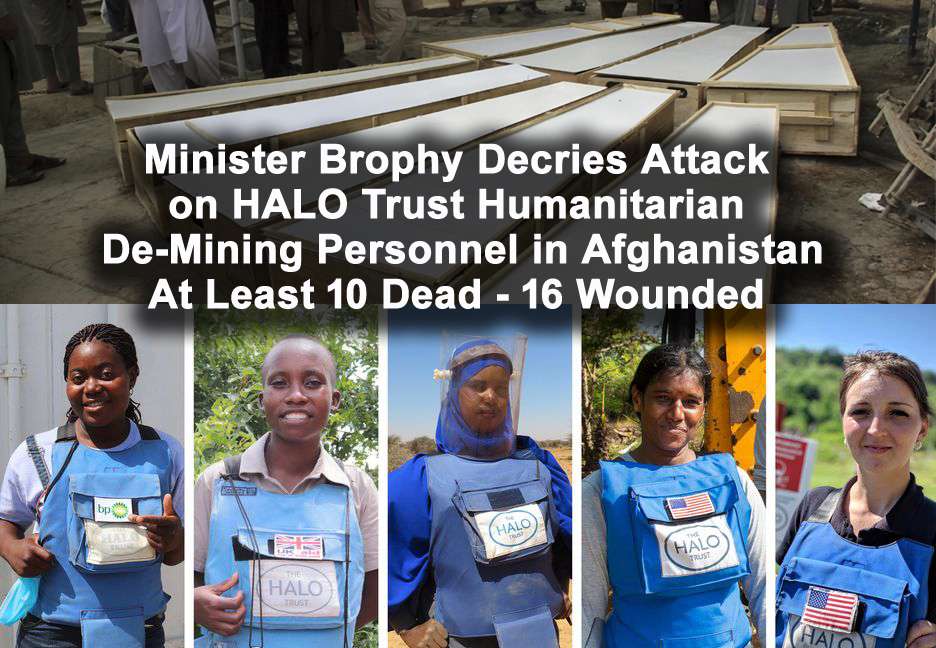 DUBLIN – The Minister for Overseas Development Aid and Diaspora, Mr. Colm Brophy, T.D., today condemned the attack on 8 June in Afghanistan on staff of the HALO Trust.  The attack on the demining team, in the Northeastern province of Baghlan in Afghanistan, killed at least ten HALO Trust staff and injured 16 others.  HALO Trust, one of Irish Aid’s key partners in the area of humanitarian demining, was established in 1988 and is a key humanitarian demining operator.  It specialises in the removal of the hazardous debris of war and has over 6,000 full-time staff worldwide.  HALO works to protect lives and restore livelihoods threatened by landmines and the debris of war.  A partner of Irish Aid since the 1990s, initially for its work in Kosovo and Mozambique,  Irish Aid currently supports HALO Trust demining programmes in Afghanistan, Colombia, Somalia, South Sudan and Zimbabwe.

According to a Statement by James Cowan, CEO of the HALO Trust, at approximately 2010hrs (local time), armed insurgents entered a marked HALO Trust camp, entered a dormitory building and began firing on un-armed de-mining personnel, many in their beds sleeping.  The attack killed 10-men and injured a further 16-men.  Their names have not been released for security purposes.  You can watch Cowan’s video statement here.

Responding to this attack, Minister Brophy said, “I condemn in the strongest terms the attack on 8 June in Afghanistan on staff of the HALO Trust.  This was a cowardly attack on workers carrying out essential demining operations to clear land contaminated by mines and other unexploded devices, so that local communities can live in a safe environment, with improved quality of life and opportunities.”  Minister Brophy continued, “Ireland offers sincere condolences to those who have lost loved ones, and a swift recovery to all those who have been injured.  “We also extend our sympathies to the staff of the HALO Trust, which is a long-standing and valued partner of Irish Aid. HALO Trust plays a hugely significant international humanitarian demining role in the removal of mines and hazardous debris of war.  Ireland, through Irish Aid, has supported the HALO Trust since the 1990s and has provided support to HALO’s demining activities in Afghanistan for over 15 years.”

International Problem – Including in Europe with Russia’s War on Ukraine

As reported by Miceal O’Hurley on 15 May 2021, the problem of combatants attacking those engaged in humanitarian de-mining operations is an international problem.   In May, Russian led forces cooperating with local militias under their control fired an Anti-Tank Guided Missile at Ukrainian soldiers and their vehicle while they conducted humanitarian de-mining operations close to the contact line near the villages of Granitne and Mirne in Eastern Ukraine.  The incident began with Russian-led forced beginning their attack on the Ukrainian humanitarian de-mining workers with intense small arms fire directed at personnel and their un-armed armed vehicle.  Russian-led forces destroyed the vehicle with what was suspected to be a 9M133 Kornet Anti-Tank Guided Missile (NATO’s nomenclature of this system is the AT-14 Spriggan).  The 9M133 Kornet is designed for use against heavy armour and tanks and its use against personnel performing humanitarian operations is a violation of the Law of Land Warfare.

Anti-personnel mines are victim-activated devices which result in severe injuries.  The most common injuries are limb-shattering causing spontaneous amputation or requiring surgical amputation.  Proponents of landmines claim the purpose of landmines is not injure, not kill with the corresponding demand on an enemy’s resources for medical care and logistical support.  Advocates of the use of Explosive Remnants of War (ERW) routinely neglect the unintentional and indiscriminate impact they cause.  An estimated 80% of all ERW casualties worldwide are suffered by civilians, often decades after conflicts end.  Owing to the nature of contact lines, agricultural lands often become contaminated with ERW with farmers and their children becoming the most common casualties in the aftermath of conflicts.

According to the UN, Ukraine and NGOs, the extent of ERW contamination in Donbass is difficult to assess accurately.  In 2014, Russian forces illegally occupied some 45,000 square km of Ukrainian territory (an area exceeding the size of Switzerland).  A year after the outset of the conflict, in 2015, the Ukrainian Defense Ministry estimated that approximately 37,000 square km of territory in Eastern Ukraine, including both temporarily occupied Donetsk and Luhansk, were significantly contaminated with ERW.  While much of the contamination occurred along the 457km contact line which has remained almost unchanged since 2014, early combat saw geographic shifts in control over areas which only served to contaminate a wider area, making ERW location, identification and removal significantly more difficult.  In 2018, the Ukrainian Defense Ministry revised its ERW estimates indicating a smaller area, approximately 7,000 square km of Ukrainian controlled territory and another 9,000 square km of temporarily occupied Ukraine, were contaminated with Russian placed ERW.

HALO Trust Operations Worldwide
According to the HALO Trust website, the HALO Trust  helps countries recover after conflict. Clearing landmines, to save lives, is at the heart of what we do. We work with communities that are too often forgotten once the fighting has ended, a point reinforced by Princess Diana after her visit to Angola in 1997.  But the nature of conflict has evolved, so too has the dangerous debris left behind when the fighting is over. As well as clearing landmines, we  deal with unexploded ordnance, from bullets to aircraft bombs, and we educate communities to keep them safe. We also build safe arms stores and systems for securing guns.

HALO Trust Began Working in Afghanistan After Russian Withdrawal in 1988
The history of HALO trust can be found on its website,   In 1988, as Soviet troops withdrew, they left behind a humanitarian crisis caused by landmines.

Colin Mitchell, Guy Willoughby and Susan Mitchell OBE, witnessed first-hand the devastation caused by landmines and other explosive remnants of war in Afghanistan. Thousands of civilians were being killed or injured, tens of thousands more refugees were prevented from returning and aid could not be delivered because of the dangerous debris littering roads, towns, villages and fields.

They resolved to do something about it and founded The HALO Trust in Kabul.

Guy was instrumental in developing HALO from a tiny charity into the extraordinarily powerful force for good it is today, leaving HALO in 2014 with more than 7,000 staff working at that time in 17 countries and territories. He helped to make mine clearance an issue that is now taken seriously throughout the world.

More than 30 years since it was founded, HALO’s Afghanistan programme employs thousands of Afghans. We have expanded the scope and breadth of our work and today have programmes in 25 countries and territories across the world. We continue to clear landmines and explosives left behind by war. But we also keep people safe and help communities to rebuild by destroying weapons, managing stockpiles and teaching families how to stay safe until the dangerous debris of war can be removed for good.

The Geneva International Centre for Humanitarian Demining (GICHD) describes a mine as a munition designed to be placed under, on or near the ground or other surface area and to be exploded by the presence, proximity or contact of a person or vehicle and that will incapacitate, injure or kill one or more persons.  A mine can remain active for decades after it has been laid. Therefore, even long after a conflict has ended, mines continue to injure and kill posing a major threat to the safety of the population.

GICHD works towards reducing risk to commu­nities caused by explosive ordnance, with a focus on landmines, cluster munitions and ammunition stockpiles.

The Centre helps develop and professionalise the sector for the benefits of its partners: National and local authorities, donors, the United Nations, other international and regional organisations, non-governmental organisations, commercial companies and academia. It does so by combining four lines of service: field support focused on advice and training, multilateral work focused on norms and standards, research and development focused on cutting-edge solutions, and facilitating dialogue and cooperation.

Collectively, our advisors support around 40 affected states and territories every year, while working very closely with partner organisations to achieve our goals. This work is made possible by core contributions, project funding and in-kind support from 30 governments and organisations. The GICHD stays flexible in its response to needs and to changes in its working context.

The feature story image that appears was created with images from the HALO Trust Facebook page and the images of the HALO Trust de-mining experts does not depict any of those killed in Afghanistan.