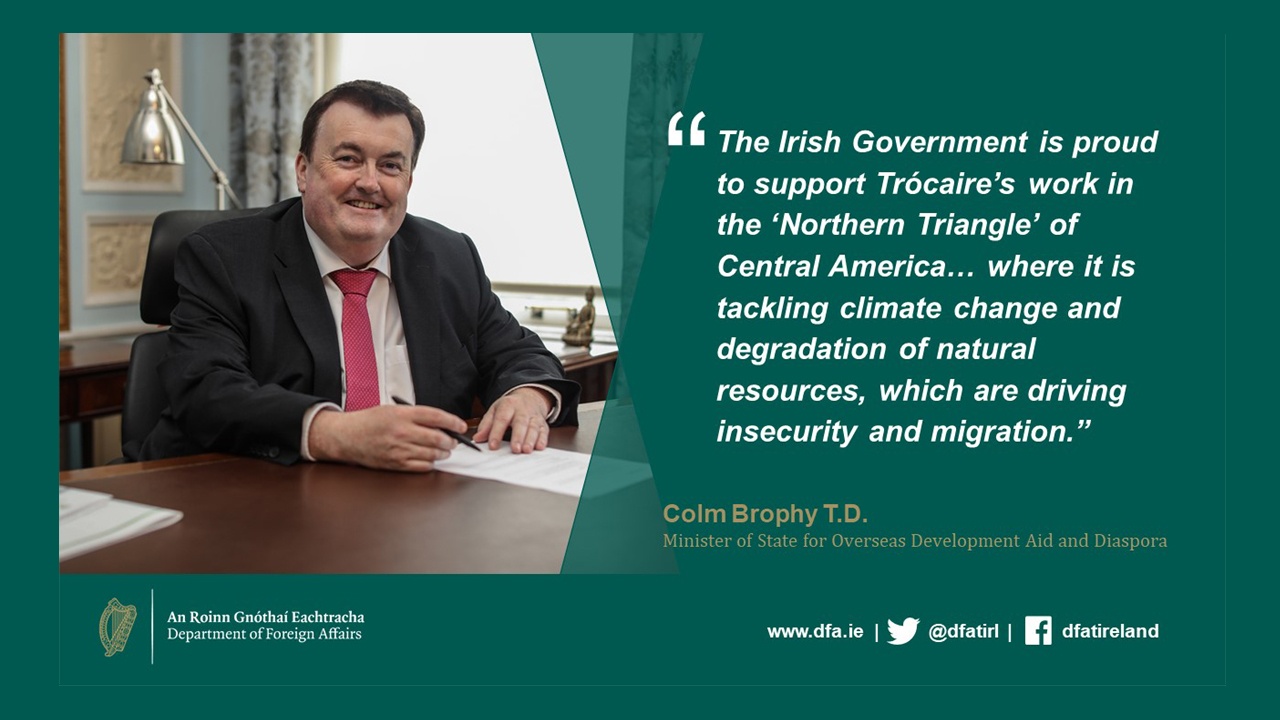 The Minister of State for Overseas Development Aid and Diaspora, Colm Brophy, T.D., today announced over €21 million in Irish Aid funding to Trócaire for its development and humanitarian work overseas, as well as for public engagement and development education work in Ireland.

“I am pleased to confirm this funding support for Trócaire, continuing its long-standing relationship with Irish Aid to support the delivery of development assistance and humanitarian aid around the world.

“Trócaire and its partners operate in some of the most challenging environments in the world; in violent and insecure contexts.   For example, the Irish Government is proud to support Trócaire’s work in the ‘Northern Triangle’ of Central America, specifically in Guatemala and Honduras, as well as in Nicaragua, where it is tackling climate change and degradation of natural resources, which are driving insecurity and migration”.

Angela’s home is on ancestral tribal land, which is held in collective title by the Tolupane people.  She receives support from Trócaire’s partner MADJ, a broad movement for dignity and justice that fights against corruption. Angela says, ‘The problem we have here is the destruction of the forest. I saw that they were selling the wood (trees) and minerals and decided to intervene. Companies have come on to our land to exploit it.’

‘A logging company entered our land,’ Angela explains. ‘We have a small stream that we use for water. We knew it was polluted when we started getting rashes, including the children. We used the water to wash clothes and dishes – it was not drinking water, thankfully. That is when I really got involved. The training I received from MADJ taught me about our rights. We were asleep and did not understand what was happening.’

Angela and her community set up a dignified encampment to protect the forest. Angela and the community, though protesting peacefully, were at risk of violence. They stopped a number of trucks by placing rocks in the road and the police came to intervene. The protestors refused to move and so the police shot twenty-five canisters of tear gas at them. There were children, elderly people and pregnant women in the crowd.’

Angela says, ‘As a woman, as a mother of five children, I have learned a lot, to fight for the defence of our territory, of our goods. Because our life lies in this forest, it lies in the rivers, it is in all the nature.’

Statement by Minister Coveney on postponement of Palestinian elections

Statement by Minister Coveney on postponement of Palestinian elections