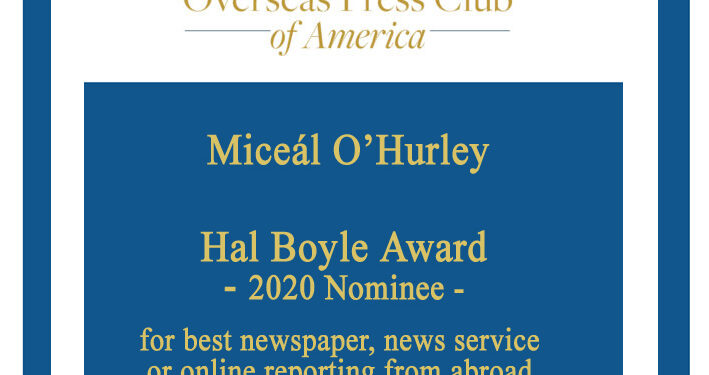 New York — Miceál O’Hurley, has been nominated for the prestigious Hal Boyle Award for ‘best newspaper, news service or digital reporting from abroad’ in the 2020 Overseas Press Club of America (OPC) annual awards. Miceál is a Journalist Member of the OPC.

Harold Vincent “Hal” Boyle (July 24, 1911 – April 1, 1974) was a prolific, Pulitzer-prize-winning journalist for the Associated Press. During 30 years with the AP Boyle wrote 7,680 columns.  He is best known for his work as a war correspondent during World War II. He was consistently closer to the front lines in the European and Pacific theatres of operation than other correspondents.  His column became a staple in over 700 newspapers.  He is  the namesake of a prize given annually to reporters by the Oversees Press Club of America, for the best newspaper or wire service reporting from abroad.  In 1951, Boyle contributed a section to a Collier’s Weekly special publication entitled “Preview of the War We Do Not Want.” Consistent with the book’s purpose to depict the effects of a hypothetical future war with another nuclear power, Boyle’s piece (entitled “Washington Under the Bomb”) described, in the form of a news story, the aftermath of dropping one nuclear bomb on Washington D.C. 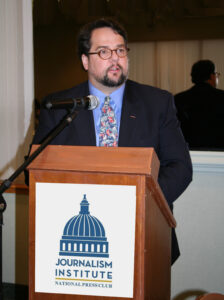 On being nominated for the Hal Boyle Award, Miceál credited his publisher and relationships with the Diplomatic Corps in Ireland and around the globe, “Having the support of your publisher is essential to any journalist.  In an age when to many governments tout freedom of the press but assume illiberal policies to impede the Fifth Estate, good journalism is increasingly important.  By limiting freedom of information, using defamation laws to suppress investigative journalism, arresting journalists for harassment while pursuing legitimate stories or the detention of journalists covering police brutality, oppressive governments or struggles to exercise free speech and democratic reform, or draw attention to human rights violations, the public is deprived of critical information necessary for an informed electorate.  Governments are not the only cause for concern as news market domination by a small handful of corporations result in the deprivation of diverse opinions and news.  In an age where disinformation and lack of reliable information has inflamed the world, fighting this illiberalism is essential as it hampers journalists from deep-dives into issues of importance and is a significant threat to democracy and freedom,” Miceál continued.

About the importance of covering the diplomatic corps he added, “When members of the Diplomatic Corps and Foreign Affairs Ministers engage with journalists it helps everyone better understand the issues that too often go un-addressed in the public domain, relegating them to the sometimes necessary but opaque cloak of closed doors.  When diplomats trust that I will handle a story with discretion and care, and not engage in censorship, and yet not shrink from asking the hard questions, everyone is better served by truth, trust and transparency.  I’m thrilled to be nominated, humbled by this nomination and encouraged to continue to employ journalism to help everyone from the average reader to policy makers and ambassadors better understand the world in which we live and therefore make better decisions“.

In October 2020, I had the privilege of conducting a rare, in-depth interview with the Ambassador of the Islamic Republic of Iran to Ireland, His Excellency Dr. Masoud Eslami.  The in-depth, 3-part series covered a range of topical matters from the Joint Comprehensive Plan of Action (JCPOA) – sometimes known as the ‘Iran Deal‘ to limit medium-enriched uranium production to deter nuclear weaponisation attainment in exchange for the lifting of sanctions by the United States, United Nations and European Union – to the devastating humanitarian impact on the Iranian population in the midst of the Covid-19 pandemic after having their medical and infrastructure system crippled by decades of trade and monetary sanctions.

Miceál’s solid research, intermate knowledge of Iran, its history and her culture, allowed him to illuminate the suffering of the Iranian people while simultaneously pressing the Iranian Ambassador with direct and piercing questions about Iran’s role in matters from human rights violations, capital punishment, the downing of Ukrainian flight 752 with the loss of 167 passengers and 9 crew and other controversial issues.  A decorated combat veteran, Airborne Ranger in the US Army and recognised Defense & Security Analyst, Miceál risked his reputation amongst his fellow Americans and invoked the ire of the Trump administration for reporting on President Trump having ordered the assassination of Iranian General Qasem Soleimani, a foe of the United States who was killed by a drone strike while visiting a civilian airport in a third-country, Iraq.  The assassination, which the United Nations Special Rapporteur on Extrajudicial, Summary or Arbitrary Executions called a clear violation of international law, was only one event during the Trump administration that drew condemnation for the United States by the world community.  Like many journalists in this age, Miceál experienced threats and abuse for reporting the truth.

Miceál’s willingness to ‘speak truth to power‘ by covering Trump’s violation of international law by ordering the execution of a Iranian on Iraqi soil (albeit Soleimani’s conduct itself often unquestionably crossed the bounds of international law), demonstrates the best traditions of journalism in the service of truth, transparency and public information.  By obtaining an interview with Ambassador Eslami, considered one of Iran’s best legal minds and diplomats, Miceál sought to help readers better understand Iran’s position on numerous topics, illuminate the humanitarian suffering of the Iranian populace and yet confront Iran on issues from humanitarian compliance and democratic reforms to peace and the JCPOA.  Since its publication, Miceál’s interview with His Excellency Dr. Masoud Eslami earned praise from diplomats, policy makers, think-tanks and researchers.