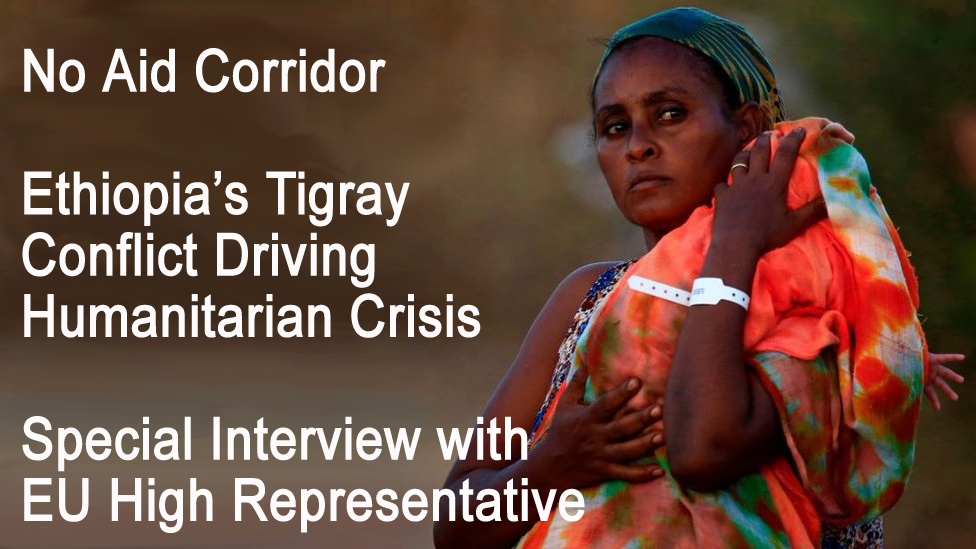 BRUSSELS – In November 2020 the Ethiopian government launched an offensive in the northern Tigray region of the country to quell a rebellion by local leaders who vowed to cease recognising Addis Ababa and form an autonomous government.  The fighting has been fierce, displacing millions of people and creating a humanitarian crisis that impacting the entire African Horn.

Diplomat Ireland has covered this conflict since its beginning with a comprehensive report in on 27 November 2020 when the offensive in the Tigray region was launched.  Speaking to His Excellency Mr. Eshetu Dessie Hordofa, Ethiopia’s Ambassador to Ireland at the time, the Ambassador stressed the need for Addis Ababa to return the Tigray region to national control, laying the blame on the rebellious Tigray People’s Liberation Front, “[The TPLF] attacked the national army and, in the process, put the lives of millions at risk so as to gain power by any means.  It has held the people of Tigray and Ethiopians as hostages.  Would any self-respecting nation negotiate with such a group?

The Ethiopian Government tried hard not to be dragged into this senseless war.  But, the TPLF is no ordinary political group, they are an organised mafia.  In light this Government has been undertaking relentless efforts to resolve the dispute peacefully over the past two years but TPLF refused to accept a peaceful resolution.  The last resort after all peaceful means attempted is to use military force to remove this hostile and rogue group, otherwise, the sovereignty and national integrity of the nation will be in question.  The law enforcement operation will be short and effective.  Moreover, the operation will be conducted carefully and in a selective manner to minimise civilian casualties.

Humanitarian and Refugee Crisis Caused by the Tigray Conflict

Since Addis Ababa sought to regain control of Tigray the armed conflict has continued to rage, causing significant internal displacement and sending refugees across the borders into neighbouring Eritrea and Sudan.  The scale of the humanitarian crisis is startling, coming on the heels of widespread crop failures, locust devastation and while the Covid-19 pandemic wreaks havoc in the region.  Beyond the horrors of the intense fighting that the populace has endured for the past two months, food insecurity and internal displacement are at their highest levels since the Ethiopian famine of 1984.

The United Nations Children’s Fund (UNICEF) issued an unprecedented alert on Wednesday, highlighting the difficulties in assessing the true scope of the humanitarian crisis.  UNICEF Executive Director, Henrietta Fore, commented “very little” is known about the impact of the conflict with UNICEF having to rely solely on “limited partner accounts and UN assessments”.  She added, “Our concern is that what we don’t know, could be even more disturbing.  For twelve weeks, the international humanitarian community has had very limited access to conflict-affected populations across most of Tigray.”

Since military operations commenced in November, the reputation of Ethiopia’s 2019 Nobel Peace Prize winning Prime Minister, Abiy Ahmed Ali, has been badly tarnished.  Despite Addis Ababa’s commitment to conduct military operations in a manner so as to minimise the impact on the Tigrayan population, the government has been criticised for its heavy handed methods and denial of UN and other NGO aid organisations to relieve the human suffering caused by the conflict.  Accusations and counter accusations of ethnic cleansing have be levelled by both sides and human rights compliance monitoring is being severely hampered by a lack of access to the region where even journalists have complained of harassment and detainment by the government.

The international community continues to look to Prime Minister Abiy to demonstrate the commitment to humanitarian obligations and peace which brought him world recognition only two years ago.  His continued failure to ensure aid corridors are opened, human rights obligations met and allow for free reporting in the region has left the world wondering if he will redeem his reputation or experience a ‘fall from grace’ as did his fellow Nobel Laureate Aung San Suu Kyi who today stands accused in the court of world opinion of having remained silent during the genocide and persecution of Myanmar’s Rohingya population.

To gain a better insight into the humanitarian crisis and obstacles to deliver relief in the region, Diplomat Ireland reached out to to the EU’s Chief Diplomat, Josep Borrell Fontelles, the EU High Representative/Vice President (HRVP).  Nabila Massrali, HRPV Spokeswoman, gave an exclusive interview to Diplomat Ireland about the humanitarian devastation and urgent need to deliver aid:

Ms. Massrali, thank you for speaking to Diplomat Ireland.

You are most welcome.

The conflict in Ethiopia’s Tigray region has been raging for almost two months.  There are a reported 2 million people that have been internally displaced and the crisis is impacting neighbouring countries like Eritrea and Sudan and further threatens to destabilise the whole of the African Horn.   From the perspective of the HRVP, what is the most pressing issue for the delivery of humanitarian aid to the region?

The humanitarian situation in Tigray and its neighbouring regions is of utmost concern.  We get daily reports of increasing casualties, ethnic violence and serious human rights and international humanitarian law violations.  Our priority remains to get full and unhindered access to all areas affected by the current conflict, in order to provide life-saving assistance to people in need.

I want to ask HRVP about the human dimension.  Paint a picture for me if you will — what are conditions like for those who are displaced or in vulnerable conditions because of the Tigray conflict?

It is estimated that several thousands of civilians have been killed or injured, and more than 2 million people have been internally displaced.  These figures are only estimates due to lack of access to Tigray.  Large parts of the population in Tigray have been cut-off from much needed assistance, including 3 million people which were already in need of external assistance prior to the conflict (representing half of the population in Tigray).  Over 58 000 Ethiopians have sought refuge in Sudan since the beginning of the conflict.

We are facing a major humanitarian protection crisis.  In addition to health, water, sanitation, hygiene, and food response, protection services are the priority needs of displaced persons and refugees affected by the conflict.

What is the EU asking of Addis Ababa at this time and in what ways is the EU prepared to help in a bi-lateral manner?

As a long standing partner of Ethiopia, we have shared on numerous occasions our concerns regarding the humanitarian situation with the Ethiopian authorities, as well as our outrage over the loss of civilian lives.  We have joined other donors and stakeholders in calling for full and unhindered humanitarian access to the Tigray region.

In line with the Declaration by the High Representative on behalf of the European Union published on 25 December 2020, the EU is alarmed by reports, including from the Ethiopian Human Rights Commission, on grave violations of international humanitarian law (IHL) and human rights law.  Reports of ethnically targeted violence in Benishangul-Gumuz as well as all other allegations of violations of human rights and international humanitarian law need to be impartially investigated and accountability ensured.

It was just over a year ago that Prime Minister Abiy Ahmed Ali received the Nobel Peace Prize for his efforts in the region, notably with neighbouring Eritrea.  Have you received any encouragement from the Prime Minister that he is willing to put his prestige on the line to effectuate a peaceful resolution to this conflict and help reduce the corresponding humanitarian suffering that accompanies it?

Our message has been constant to the Ethiopian government and we remain in close contact with them.  In the immediate term, we hope that efforts will be deepened to facilitate humanitarian aid delivery, to fully restore communication lines to Tigray and allow media access.  Some measures have been taken but unfortunately the seriousness of the situation requires more to handle it.

In the medium term, the EU encourages also the government to act in favour of reconciliation and dialogue, notably in view of the upcoming elections.

More broadly, we hope that all parties involved in the deterioration of the situation will listen to our calls and act in favour of an appeasement for the sake of the Ethiopian population and the stability of the region.

What kind of partnership is being forged with the African Union, the EU and others to address the immediate and long-term goals of bringing stability to the region, reduce conflict and forge a sustainable peace?

The EU supports all actions that could lead to reduce tensions and encourage de-escalation, in particular those by the region.  We welcome statements and demarches by the Intergovernmental Authority on Development (IGAD) and African Union in this regard.

How quickly is the EU capable of acting to deliver relief once a humanitarian corridor is opened?

In 2020, the EU provided over €63 million to humanitarian projects in Ethiopia including over €24.5 million to address urgent humanitarian needs in Tigray and the influx of Ethiopian refugees from Tigray to Sudan.  The funding for Tigray will mainly seek to urgently replenish and pre-position life-saving goods and equipment, provide life-saving services such as water and health, and enhance treatment for malnutrition.

While the response is currently limited due to access restrictions and bureaucratic impediments, several EU-funded humanitarian organisations are providing some assistance and indicate that they could increase both significantly and swiftly their emergency response should unconditional access be provided.

Ms. Massrali, on behalf of Diplomat Ireland, allow me to thank you for your time and insights.

You are very welcome.