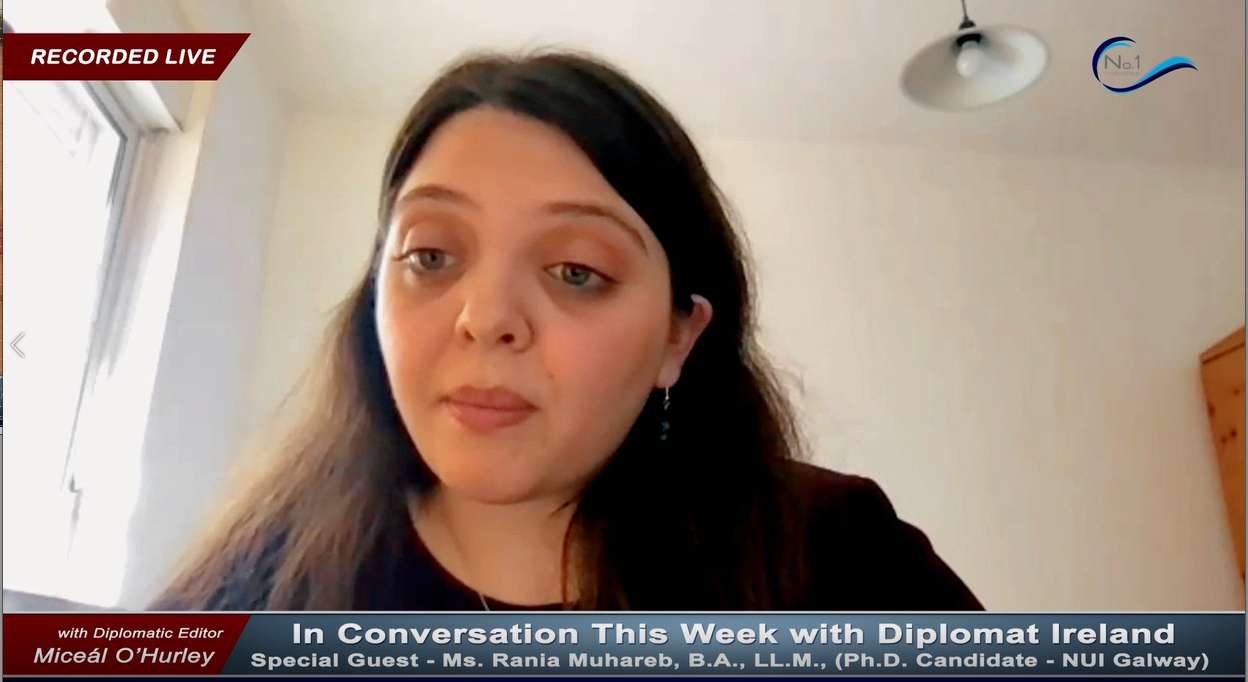 EAST JERUSALEM – National University of Ireland (Galway) doctoral candidate, legal researcher and activist Ms. Rania Muhareb, B.A., LL.M. speaks with Diplomacy in Ireland – The European Diplomat about the recent events that erupted in the chaos that has seen more than 200 Palestinians killed and 10 Israelis in recent weeks.  The interview appears on the Diplomacy in Ireland – The European Diplomat YouTube Channel.

As of the time of publication, the government of Egypt has brokered a cease-fire between Israel and Hamas that seems to be holding.

Ms. Muhareb discusses the continuing pattern of violence that Palestinians hold has continued, unabated, over the last century.  While recent weeks have seen large-scale airstrikes and artillery bombardments inside of Gaza, and rockets launched indiscriminately into Israel by Hamas, Ms Muhareb argues, passionately, that the violence witnessed of late is simply an extension of the violence that she holds is inflicted upon the Palestinian people on an ongoing basis.  On the issue of language, Ms. Muhareb challenges the host of ‘In Conversation This Week with with Miceal O’Hurley’ on the use of language that too often is part of the systemic problem of colonialism and what she describes as the growing recognition in the international community that Israel is engaged in apartheid.

The interview covers a number of legal issues from the housing “dispute” in East Jerusalem’s Sheik Jarrah neighbourhood, which Ms. Muhareb cites as part-and-parcel of the long-standing Israeli policy of confiscating Palestinian homes and land with judicial approval to issues of Israel’s obligations as an “occupying State” in international law.  The use of Article 51 of the United Nations Charter as a justification for Israel’s invocation of its “right of self defense” is explored along with many other topics.  On the issue of the International Criminal Court (ICC) investigation of Israel, Ms. Muhareb calls upon the ICC to prosecute those responsible for their crimes.  Sanctions, Ms. Muhareb argues, would be a positive step in helping resolve the ongoing problems, noting Israel has repeatedly been condemned over the years for various bad acts yet has never been the subject of sanctions, particularly for goods produced in illegal settlements.

Ms. Muhareb, whose doctoral studies and dissertation at the NUI (Galway) addresses apartheid and the oppression of occupied peoples, speaks about the extensive research and publication undertaken by the Irish Centre for Human Rights including its 18 May 2021 Statement, In Solidarity with the Palestinian People.

Noting Ireland’s ongoing support for the liberation of the Palestinian people, Ms. Muhareb provides and overview of the proposed Occupied Territories Bill being considered by the Oireachtas which she claims will bring Ireland into compliance with its obligations in international human rights.  Ireland is the first State to consider such legislation.  According to an article appearing in the Irish Times on 21 July 2020, the Taoiseach stated that legal advice indicates the Occupied Territories Bill, as now written, would breach EU law.  An Taoiseach Micheál Martin, T.D. has called upon Ireland to pursue such legislation along with consideration by its EU partners.

Crimean Tatar Representative to UN, Ms. Ayla Bakkalli on ‘In Conversation This Week’