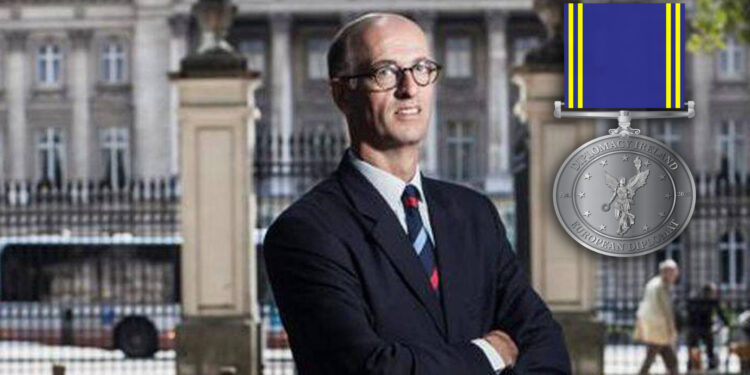 DUBLIN – Diplomacy in Ireland – The European Diplomat is pleased to announce a further award of the Diplomatic Service Medal to members of the dipolomatic corps serving in Ireland.  The Medals, which are awarded annually to individuals and/or organisations, are conferred in recognition of their contributions to diplomacy, bilateral and multilateral relations, the promotion of peace and prosperity as well as other core values of diplomatic efforts.

His Excellency Mr. Pierre Emmanuel De Bauw, the former Ambassador of the Kingdom of Belgium (2017-2021) to Ireland will be the 2021 recipient of the Sir Roger Casement Award of the Diplomatic Service Medal with Honours for his work in the field of equality, understanding and promotion of the rights of members of the LGBTQ+ community.  Ambassador De Bauw’s advocacy for the rights and inclusion of the LGBTQ+ community in Ireland, Belgium and throughout the European Union, is reflective of his commitment to fundamental human rights, equality, respect and inclusion – a hallmarks of his diplomatic calling.

The 2021 Sir Roger Casement Award is sponsored by Dublin Pride, a non-profit organisation devoted to promoting LGBTQ+ people in Dublin and beyond.  Dublin Pride CEO, Jed Dowling, commended Ambassador De Bauw and the Kingdom of Belgium’s commitment to the community:

“I’d like to congratulate Ambassador De Bauw and of course the whole team at the Embassy of Belgium in Ireland who we had the pleasure of working closely with this year as they took the lead in organizing the diplomatic community’s participation in Dublin Pride.

It seems fitting that the inaugural Roger Casement Award would go to a Belgian Ambassador, it is a testament to the global impact of Casements work, the importance of calling out injustice and inequalities and the potential that every nation has to become a champion for equality.”

Roger David Casement (Ruairí Dáithí Mac Easmainn, as Gaeilge) (b. 1864 – d. 1916) is universally known as Sir Roger Casement.  Casement served as a diplomat for the British Foreign Office.  Casement became known as a humanitarian activist, described as the “father of twentieth-century human rights investigations“.  He was honoured by King Edward VII in 1905 for “the Casement Report on the Congo” and Knighted by King George V in 1911 for his seminal investigations of human rights abuses in the rubber industry in Peru.

An Irish nationalist, having joined the Gaelic League in 1904, Sir Roger Casement became a leader in the Irish cause for freedom.  As part of the 1916 Rising for Irish Independence, Casement was arrested at Banna Strand, Tralee Bay, Co. Kerry and transported to Brixton Prison, England.  Casement, who had confided in his diaries his life as a Gay man, was encouraged to have his “Black Diaries” submitted into evidence in his trial for treason against the Crown on the assurance that it would lead to a “guilty but insane” verdict.  With great courage, Casement refused to have his personal life declared a mental defect and was found guilty and sentenced to death by the British.

A United States Senate appeal against the death sentence was rejected by the British cabinet on the insistence of prosecutor F. E. Smith, an opponent of Irish independence.  Casement was stripped of his honours, including his Knighthood, and hanged unto death and buried in an unmarked grave in the prison grounds.  His remains were later identified and repatriated to Ireland where in 1965 he received a State Funeral in Dublin.  Today, Casement is celebrated as a symbol of how LGTBQ+ people can achieve greatness in the service of humanity when their human rights are protected and inclusion is the norm.

The work of His Excellency Mr. Pierre Emmanuel De Bauw in promoting the fundamental rights of all peoples and advocating for the universal inclusion of the LGBTQ+ community in all aspects of daily life, in Ireland, throughout the European Union and the world beyond is deserving of great recognition.  Owing to the Patronage of the Dublin Pride community, Ambassador De Bauw will be the inaugural recipient of the Sir Roger Casement Award and its Diplomatic Service Medal with Honours.

“For centuries the Irish people struggled for equality in their own land.  Thanks to the work of Sir Roger Casement, who used his fame earned by exposing human rights violations in Africa and South America in the struggle for Irish freedom, independence and equality, Ireland is today a more inclusive and tolerant society and stands as a model within the European Union.  By working to extend Casement’s work for human rights and equality, Ambassador De Bauw distinguished himself in the eyes of all Irish people, Europeans throughout the continent and across the planet.  Diplomacy in Ireland – The European Diplomat was honoured to have the guidance of the Dublin Pride Community and Jed Dowling in helping to honour Ambassador De Bauw for his model diplomatic efforts on behalf of all humanity”.  O’Hurley added, “Of course, we congratulate Dublin Pride on their patronage of the Sir Roger Casement Award – a truly fitting honour for diplomats that promote the values for which Roger Casement fought in his human rights work and in his personal life”.

Comments from Awards Chairperson Oksana Shadrina
“When it came time to recognise a diplomat who reflected the values of Roger Casement, Ambassador Pierre Emmanuel De Bauw’s name was always the first on everyone’s list,” said Shadrina.  “I congratulate His Excellency on his inclusive and justice-driven advocacy for the whole of humanity, and in particular the LGTBQ+ community in Ireland, Belgium and throughout Europe” she added.