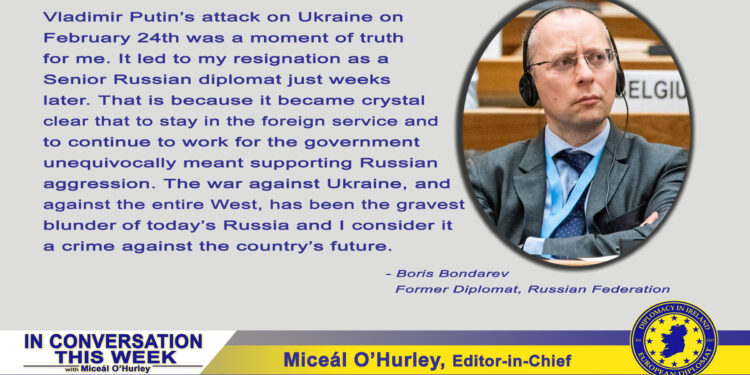 GENEVA — Boris Bondarev, formerly a Senior Russian Federation Diplomat Boris Bondarev was a guest for an exclusive interview on ‘In Conversation This Week with Miceál O’Hurley’ to discuss his very public resignation from the Ministry of Foreign Affairs of the Russian Federation and more.  Bondarev, who appeared via video from Geneva thanks to the Swiss Government having extended him permission to remain in Switzerland and providing security assistance in the aftermath of his resignation, discussed issues ranging from the war in Ukraine, the stability of the Putin regime, the potential for internal destabilization following the end of Putin’s autocracy and implications for world peace, arms control and nuclear nonproliferation.

During the interview Bondarev opined about the threat to former Soviet Bloc nations including Moldova, the Baltics and Europe in general.  Expressing confidence in Ukraine winning the war commenced by Russia in 2014, Bondarev warns of the potentiality of conflict in the aftermath of any transition of power following the inevitable demise of the Putin regime.  Expressing hope for a democratic future for Russia, and indicating his desire to play a role in Russia’s future as a peaceful, democratic player on the world stage, Bondarev none-the-less warns of the chaos that might ensure should Russia devolve into power struggles and internal conflicts and the difficulties that could create for future European and world stability. 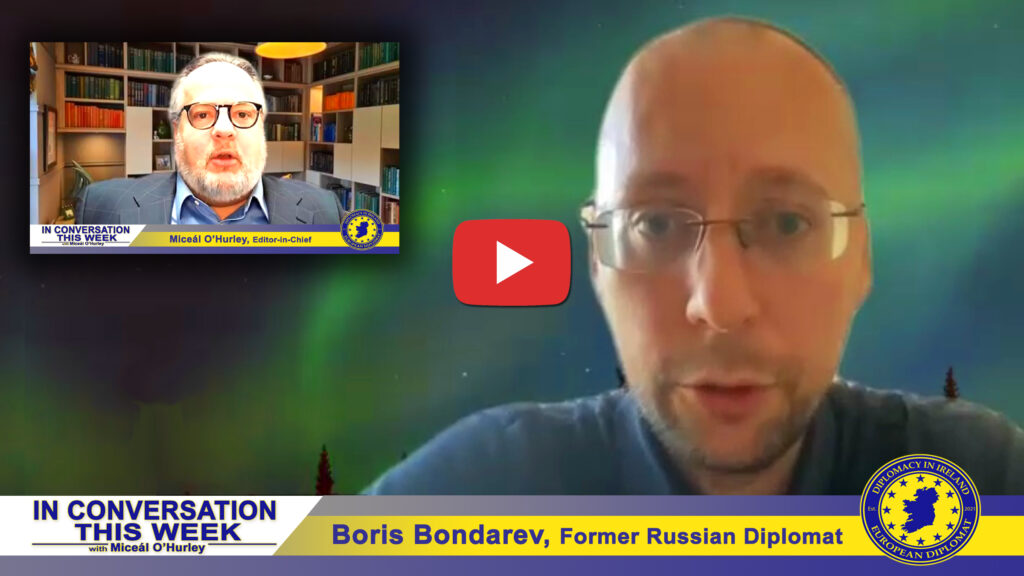 Following Russia’s expanded invasion of Ukraine in 2022, on 23 May Bondarev announced that he had resigned from his position in protest over the Russian invasion of Ukraine.  In his letter of resignation, which was disseminated widely, Bondarev called Russia’s 2022 invasion of Ukraine’s heartland an “aggressive war”, labeling it a crime against the Ukrainian people.  His assertion that the invasion also represented “the most serious crime against the people of Russia, with a bold letter Z crossing out all hopes and prospects for a prosperous free society in our country,” marked one of the more public acts of dissent in the aftermath of the 2022 invasion.

Reuters reported that Bondarev claimed he had repeatedly expressed his concerns about the invasion with senior embassy staff but was told to “keep his mouth shut in order to avoid ramifications.”  In subsequent interviews Bondarev has indicated that he did not expect any of his colleagues to follow his lead and resign.