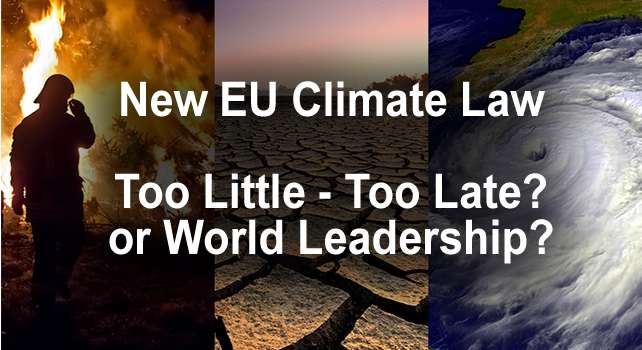 STRASBOURG – While parts of the world bicker over the existence and/or scale of climate change, the EU has forged ahead with ambitious plans to curb the world’s climbing temperatures, protect its waters, preserve habitable lands and reduce the very air that is killing humans by the millions.  The question is, is it ‘Too Little-Too Late?’ or can the EU help lead the necessary global change that will keep the planet habitable with global leadership?

The 2016 Global Risks Report by the World Economic Forum gave a stark warning that should humanity fail to mitigate climate change, and radically adapt to its changes within the decade it will present “the most impactful risk” that face governments across the globe.  The World Economic Forum ranked climate change as a bigger threat to humanity that even weapons of mass destruction.  This bleak warning challenged the world to act but the response time for effective implementation seems to lag behind the immediacy of the demand.

Consequences of Past and Present Inaction

As Europe witnessed with the Covid-19 pandemic, those who fail to get vaccinated become virtual breeding grounds for variants that challenge even the best vaccines.  At present, the ‘Delta’ variant and ‘Delta Plus’ variants of the original Covid-19 virus that was identified only 18 months ago in a small epidemic has cause the pandemic to threaten world health, economies and stability.  It is undeniable that laxity in action and failure to take precautions has prolonged the length of the pandemic, the effect of the virus has become more severe and the impact on the world is all the more devastating.

The same holds true for climate change.  As climate change takes hold the exponential growth in problems create newer and more devastating consequences for the human population, animals and natural habitats.  Rising costal waters invade cities where the artifacts of human existence severely damage local water habitats.  Sea currents are changing, disrupting feeding and migratory habits of marine life in the middle of oceans and seas, always to their detriment.  As farmlands face higher and changing wind patters topsoil is eroded and become arid and arable.  Sever weather threatens human occupation.  Fresh water sources are becoming contaminated and pollution and waste have made regions uninhabitable.  Climate change has become so severe that even the un-trained observer can witness the cascading impact it has on the global ecosystem.  More alarming still is the direct impact climate change is having on human health.  No longer is the debate about dirty air alone but now the devastation to animal habitats that are driving them into contact with humans such as the suspicion that bats carried the Covid-19 virus into the human population.

The 2015 Paris Climate Change Conference saw nearly every nation make a commitment to move away from dirty fossil fuels and pursue cleaner, smarter energy options and policies.  A significant goal of the Conference was to limit global temperature rise in this century to 2 degrees (Celsius) or a more aggressive 1.5 degrees, if possible.  One of the greatest achievements from the Conference was the world’s second highest polluter, the United States (China is first) commit to a 26% decrease in harmful emissions.  Sadly, the commitment only barely survived the Conference and was withdrawn by the then newly elected Donald Trump.  It took the election of President Joe Biden four-years-later to get the United States to re-commit to the Paris Climate Accord.

The political uncertainty served to underscore how Europe needed to re-double its efforts with unreliable partners like the United States or uncertain partners like China.  The European Parliament has played an important role in pushing for more ambitious European Union climate legislation and declared a climate emergency on 28 November 2019.

The European Parliaments latest plan is ambitious.  The new European Union Climate Law increases the European Union’s 2030 emissions reductions target from 40% to at least 55%. With the contribution from new carbon sinks it could raise to 57%.

The European Parliament endorsed the Climate Law, agreed informally with member states in April, with 442 votes to 203 and 51 abstentions. It transforms the European Green Deal’s political commitment to European Union climate neutrality by 2050 into a binding obligation. It gives European citizens and businesses the legal certainty and predictability they need to plan for this transition. After 2050, the European Union will aim for negative emissions.

The new EU Climate Law increases the EU’s target for reduction of greenhouse gas (GHG) emissions by 2030 from 40% to at least 55%, compared to 1990 levels.  Additionally, an upcoming proposal from the Commission on the LULUCF Regulation to regulate GHG emissions and removals from land use, land use change and forestry, will increase European Union carbon sinks and will hence de facto increase the 2030 European Union’s target to 57%.

Greenhouse Gas Budget Must Guide Upcoming 2040 Target
The Commission will make a proposal for a 2040 target at the latest six months after the first global review in 2023 foreseen in the Paris Agreement.   In line with the European Parliament’s proposal, the Commission will publish the maximum amount of GHG emissions estimated the European Union can emit until 2050 without endangering the EU’s commitments under the Agreement.  This so-called ‘GHG budget’ will be one of the criteria to define the EU’s revised 2040 target.

By 30 September 2023, and every five-years thereafter, the Commission will assess the collective progress made by all European Union countries, as well as the consistency of national measures, towards the European Union’s goal of becoming climate neutral by 2050.

Climate Plan Still Needs Council Approval
The deal is expected to be approved by the Council shortly.  The Regulation will then be published in the Official Journal and enter into force 20 days later. The Commission plans to present a series of proposals on 14 July 2021 in order for the European Union to be able to reach the more ambitious 2030-target.

This article incorporated elements of a European Parliament Press Release