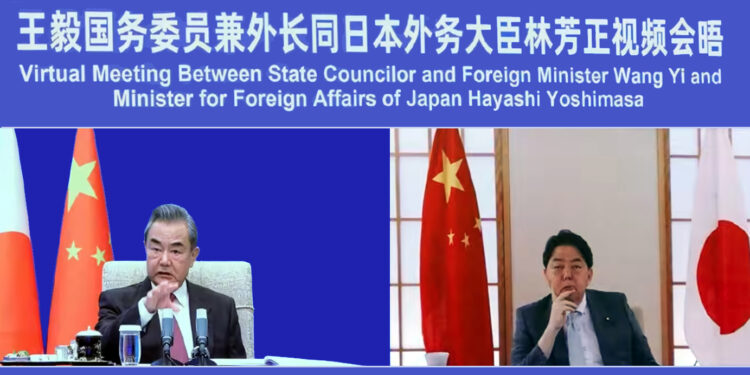 TOKYO — Japan has signaled a new initiative in its strategic policy review on dealing with its largest neighbour, China.  With China’s President Xi Jinping widely expected to seek a third-term, Japan is eyeing a long-term diplomatic initiative to work with its most significant regional and bilateral partner.  Japan’s Foreign Ministry announced it has established a new strategy team to coordinate diplomatic policies with China.

Japan-China relations have for years been guided by the agreed phrase, “Mutually Beneficial Relationship Based on Common Strategic Interests.”   This paradigm arose from a 2006 Joint Statement during former Prime Minister Abe Shinzo’s first term.  In 2008, Chinese President Hu Jintao and then Japanese Prime Minister Fukuda Yasuo consolidated this modality as a central plank in the bilateral framework for Japan-China relations.  Also guiding their relations is Japan’s National Security Strategy’s aspirational statement, “Stable relations between Japan and China are an essential factor for peace and stability of the Asia-Pacific region.” The extent to which Japan’s new initiative might seek to change this operative framework remains uncertain.

What is know is that the new team in Japan’s Foreign Ministry will largely focus its attentions on shifting Japan’s policy activity from a mid-to-long-term perspective based on China’s evolving regional responses and economic prospects.   A senior ministry official was quoted as noting the paradigm shift, “We had often been swamped with daily matters, but we will now concentrate on observing China’s movements.”

The team, established in April, was created within the First China and Mongolia Division of Japan’s Foreign Ministry’s Asian and Oceanian Affairs Bureau.  With analysts predicting that Xi will continue to consolidate his hold on both the Party and China, Japan is anticipating tightening regional tensions.  Intensified competition between the United States and China for influence on the world stage will also play a factor given the strong Japan-U.S. relationship.

Mirroring Japan’s diplomatic initiative, United States Secretary of State Antony Blinken stated only last week that the State Department will launch a “China House” team of diplomats to coordinate and implement policy regarding China.  It is uncertain if Japan and the United States coordinated their recent initiatives to deal with China through specialised diplomatic teams or if the activities evolved independent of one another.

Japan’s recent focus on increasing its security partnership with the United States comes at a time of growing strain in relations between China and the United States.  Diplomacy in Ireland – European Diplomat’s assessment, however, is that this does not necessary indicate any major realignment in the Asian theatre.  Prime Minister Fumio Kishida has repeatedly stressed that Japan seeks to build a “constructive relationship” with China.  That bilateral relationship is largely expected to focus on economic relations separate and apart from heightened security issues that stress the region.  It remains to be seen if Japan can long and deftly navigate a major economic policy enhancement programme without its diplomats being pulled in to the regions security touchstones such as North Korea’s increased missile activity, freedom of navigation in the ever-contentious South China Sea or Taiwan.

Undoubtedly, Russia’s expansion of its brutal 8-year long war on Ukraine this February acted as a catalyst to accelerate this initiative.  China has continued to indicate its pro-Russia stance without actively becoming engaged in military operations in the European theatre.  It remains uncertain the extent to which China’s support for the Moscow will be made more operative as the relationship has posed several delicate problems for China.  China’s alacrity at continuing to distance itself from Russia’s invasion of Ukraine and Moscow’s continued threats to its European neighbours all while refraining from overt criticism of Russia’s “special military operations” continues to evolve but remains unchanged for the moment.  However, Beijing’s patience with the open-ended duration of the war is beginning to be palpable.  China’s domestic needs require it to stabilise its economy and focus on more germane issues to its own strategic policy issues.

In the meanwhile, Japan’s headlong foray into preventative diplomacy demonstrates how rapidly it is emerging as a more preferred modality of modern diplomacy and engagement.  Accordingly, better assessment, understanding and expert resourcing is necessary for such initiatives to be successful.  Japan’s foreign service seems to be out-in-front of what Türkiye called “Recoding Diplomacy” at its Antalya Diplomacy Forum which, coincidentally, was held shortly after Russia’s expanded invasion of Ukraine in February.

According to Japan’s Foreign Ministry, aside from policy reformulation for a more long-term diplomatic focus, the newly established team will conduct a top-to-bottom review of China’s legal and administrative system.  Japan believes, and advisably so, that before any new accords are reached a better understanding of China’s often byzantine and bifurcated operating environment would be prudent.

One of the more delicate tasks of the new team will be the establishment of a post specifically carrying responsibility for overseeing Japan’s relations with Taiwan.  China continues to maintain that Taiwan is a renegade province and has over time maintained its position that it is within their authority to use force, if necessary, to reunify Taiwan with mainland China.  Japan continues to embrace its 1972 formal recognition of the communist regime in Beijing as the “sole legal government of China.”  While somewhat ambiguous with regards to Taiwan, Japan’s position largely reflects that of the world community including the United States and United Nations.

In a July 2021 speech at a private, political fundraiser, Japan’s Deputy Prime Minister seemingly asserted that “Japan pledges to defend Taiwan if China attacks.”  Such an un-ambiguous assertion by a senior Japanese cabinet official was heralded as a decisive shift if Japan’s China-Taiwan policy by pundits at the time.  Albeit, Japan has never officially made such a commitment on Taiwan’s security.  Moreover, Japan, which plays host to about 50,000 troops from the United States, has never signaled its willingness to support their American ally in the event of China exercising military force on Taiwan.  Undoubtedly, proximity would militate towards the United States requesting Japan’s assistance should that eventuality arise.  Only last month, President Joe Biden again indicated the United States would be willing to intervene militarily to come to Taiwan’s defense should China attack the island.

This new Foreign Ministry initiative by Japan coincides with Prime Minister Kishida Fumio bringing together two cardinal policies in Japan’s foreign policy strategy – an economic security bill and a foreign and security policy that relies on 3-existing strategy documents – the National Security Strategy (NSS); the National Defense Program Guidelines (NDPG); and, the Medium Term Defense Force Buildup Program (MTDP).  Legislative drafting and a comprehensive policy review of the newly joined 3-documents is expected to be completed by the end of 2022.