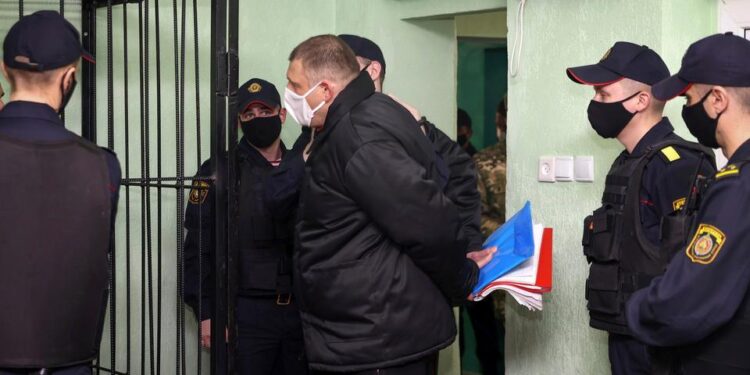 MINSK — Siarhei Tikhanouski, the 2020 Belarusian Presidential opposition candidate who was jailed by Alexander Lukashenko in May of that year to prevent his election has had his 18-year prison sentence confirmed by the Belarusian Supreme Court.  The Belarusian judiciary is widely held to be a puppet body under the control of the “Last Dictator in Europe”, Alexander Lukashenko.  Tikhanouski had appealed his sentence only to have the Supreme Court uphold the term of confinement.  According to Amnesty International, Tikhanouski is considered a “Prisoner of Conscience” as his supposed offense was simply to run for office – an act supposedly allowed under Belarusian law.

Tikhanouski has exhausted his right of appeal under Belarusian law.  The European Court of Human Rights does not have jurisdiction over Belarus and an appeal to that body would not be possible.  Clemency by Lukashenko appears beyond the likelihood of possibility.  If forced to serve the entirety of his sentence Tikhanouski will be more than 60-years old at the time of his release.

After his arrest, Tikhanouski’s wife, Sviatlana Tsikhanouskya, took his place on the ballot.  Despite brutal government interference in the election, Tsikhanouskya was believed to have won the election before vote tampering by Lukashenko loyalists.

Tikhanouski became an unintentional activisit.  After organising a farmstead near his hometown of Homyel he found himself confronted by bureaucratic hurdles from local, regional, and national officials.  Despite pleas for bribes from the notoriously corrupt regime, Tikhanouski decided to take his complaints public, speaking with journalists.  This eventually led him to become a blogger and a Belarusian Youtube sensation.  Frustrated with the regime’s incessant corruption Tikhanouski declared himself a candidate for President, pitting him against Lukashenka who has held an iron grip on the State for over 2-decades.

Tikhanouski’s activism and candidacy led him to travel widely throughout Belarus, attracting large crowds and more Youtube subscribers than the official government media channel, 24 Belarus.  When Tikhanouski’s subscribers reached more than 12 times the number of the government channel he was arrested and charged with attempting to overthrow the government, explicitly “organization or preparation for a grave breach of public order.”