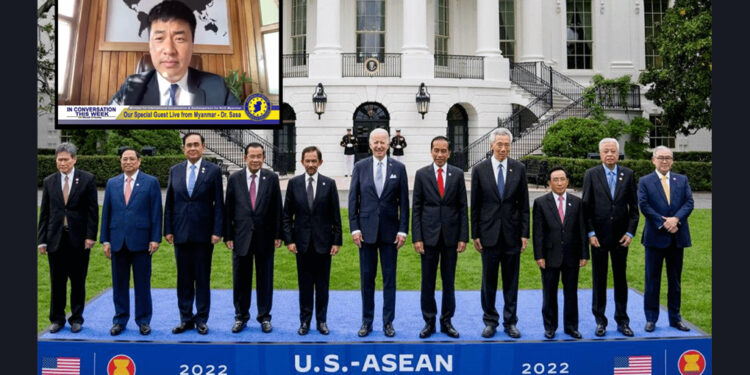 MYANMAR — The Association of South East Asia Nations (ASEAN) wrapped-up its first Washington, D.C. summit in May.  Founded in 1967, the 10-country body of South East Asian Nations originally included Indonesia, Malaysia, Philippines, Singapore and Thailand.  In 1984, Brunei Darussalam joined the body followed in 1995 by Viet Nam with Lao PDR and Myanmar in 1997.  Cambodia joined in 1999.

Dr. Sasa, Minister for International Cooperation and Spokesperson for the National Unity Government (NUG) of Myanmar gave Diplomacy in Ireland – European Diplomat an exclusive interview during the ASEAN Summit in Washington.  Dr. Sasa, formerly a Special Envoy to the United Nations, has spearheaded the NUG’s international cooperation efforts.  He has been received at the highest levels of government internationally, is a friend of Prince Charles and was auspiciously invited by the Palace to attend to the Platinum Jubilee of Her Majesty Queen Elizabeth II.  Dr. Sasa serves as the Spokesperson for the NUG.

During the interview, Dr. Sasa discusses the commonalities between the people of Myanmar and Ukraine, each of which is fighting for democracy and the international rule of law to prevail over authoritarian regimes whose ambitions are territorial and about the acquisition and preservation of power.  Russia continues to voice support for the Tatmadaw military junta and continues to supply it with weapons they use against their own people.  Russia’s war on Ukraine has largely displaced the plight of Myanmar, Belarus, Syria and other peoples who are facing similar circumstances of violent oppression by regimes lacking a popular, democratic mandate.  The NUG are in effective control of more than fifty-percent of Myanmar and have the popular support of the majority of the population.

While the ASEAN Summit had a broad agenda it was the exclusion of the Tatmadaw military junta of Myanmar’s exclusion that drew worldwide attention.  The military junta has repeatedly called on countries not to engage with the NUG, largely a body of officials from the democratically elected administration that was deposed by the Tatmadaw on 1 February 2021.  The NUG also included civil society actors who enjoy widespread popular support from the people of Myanmar.  The military junta has labelled the NUG “terrorists”.

The junta has largely ignored their commitment to ASEAN.  Despite agreeing to the plan, the military junta has continued to demonstrate its refusal to be guided by international law and respect human rights obligations.

Rather than immediately ceasing violence as called for, the junta has continued to its violent oppression of the Myanmar people.  Since seizing power by force in 2021, the military junta’s conduct has been documented as including widespread and continuing atrocities inflicted by military and police under their control, thousands of killings and summary executions, bombings, arbitrary detention on a mass scale, torture and the suppression of a free press.

The audacity of the military junta’s refusal to be guided by their commitment to ASEAN is unprecedented.  Instead of implementing the first point by ceasing the violence the military junta has scaled-up its use of force, killing more than 1,800 civilians in May.  According to the most reliable statistics, some 1,075 of those deaths occurred after the junta gave its guarantee to ASEAN.  The victims of the junta’s killing spree demonstrate the indiscriminate nature of the junta’s violent campaign to oppress the people of Myanmar with more than 130-children, youth, the elderly, politicians, civil society actors, peaceful protestors, medical workers and others.

One of the more despicable tools used by the junta in its campaign against the people of Myanmar is the use of mass detention and lack of due process and judicial review.  At least 13,000 people have been detained by the junta, including foreign journalists and aid workers.   The junta has increasingly resorted to kidnapping family members, friends and co-workers of activists in an attempt to coerce and otherwise blackmail them into surrendering.  In all, the military junta show few if any hallmarks of a legitimate government recognised by its people and grounded in the rule of law.

The ASEAN summit’s inclusion of the NUG to meet on the sidelines in Washington marks a growing exasperation with the junta.  ASEAN Parliamentarians for Human Rights, a pro-human rights group of lawmakers within ASEAN countries, called on the body to invite the NUG to the ASEAN Leaders Meeting in Washington rather than the military junta.  But it is not just Myanmar’s neighbours who are embracing the NUG.

Last September the UN had been expected to formally recognise the military junta as the legitimate government of Myanmar.  However, a rare deal brokered between Beijing and Washington effectively prevented the Tatmadaw military representatives from attending the meeting on behalf of the junta thus forestalling a decision to allow the junta to replace His Excellency Mr. Moe Tun, a member of the NUG, from being replaced.

Internationally, the NUG’s efforts to build international cooperation is also gaining momentum.  In October 2021, the French Senate’s unanimous resolution to formally recognise the NUG at the official government of Myanmar allowed it to be sent to the National Assembly for passage.  In the same month, the European Parliament adopted a resolution recognising the CRPH and NUG as the only legitimate representatives of Myanmar.

When Malaysia’s Foreign Minister, Saifuddin Abdullah, took to Twitter to disclose he met with his counterpart from the NUG, Foreign Minister Zin Mar Aung, met at the ASEAN Summit in Washington.  The act further infuriated the military junta.  It should have come as no surprise to the Tatmadaw military junta as in October 2021 Abdullah warned the junta that Malaysia was prepared to begin cooperating with the NUG if the terms of the ASEAN 5-Point Consensus weren’t implemented.

The meeting marked the first public engagement between the NUG with one of its Southeast Asian partners.  In his Tweet, Saifuddin wrote, “[Malaysia] stands ready to work towards restoring peace and democracy in Myanmar.  We took the opportunity to exchange views on latest developments in Myanmar, where Minister Zin shared insights as well as challenges faced by NUG, including humanitarian assistance, technical training and education for the Myanmar refugees.”

UNHCR estimates that there are over 1.2 million persons of concern in Myanmar including refugees and internally displaced persons.  This number is widely considered to be a gross under-estimate of the scale of the refugee crisis.  Hunger and malnutrition now effects 6-out-of-10 people in Myanmar.  The number is expected to grow as the military junta continues to deploy landmines in agricultural area as part of their campaign to weaponise food to coerce the people of Myanmar.

The disclosure of the meeting by Abdullah is widely acknowledged as not only a further step by Malaysia towards embracing the NUG but a pivot by ASEAN as well.