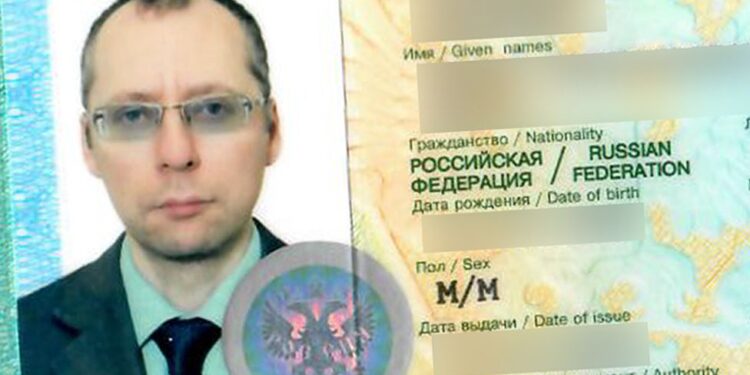 DAVOS — In a rare act of heroism by a veteran Russian diplomat, Boris Bondarev, posted to the Russian Diplomatic Mission in Geneva, handed a letter of resignation to Russian Federation Ambassador Gennady Gatilov whom heads the Mission.  When contacted by Diplomacy in Ireland – European Diplomat for comment, the Mission declined to answer.  Bondarev confirmed by telephone that he had resigned, effective immediately on 23 May.  According to CBS News, a Russian diplomat at the United Nations commenting anonymously spoke dismissively of Bondarev’s resignation, “Every family has its black sheep.”

Bondarev’s resignation has caused deep embarrassment for the Kremlin.  It comes at a time of heightened tensions due to Russia’s widened invasion of Ukraine this Spring.  In his resignation letter Bondarev pointedly criticised the Russian Federation for what he characterised as an “aggressive war unleashed” on Ukraine by Russian Federation President Vladimir Putin.  Bondarev’s English language resignation letter was passed-on to the AP news agency by an unnamed Russian diplomatic official. 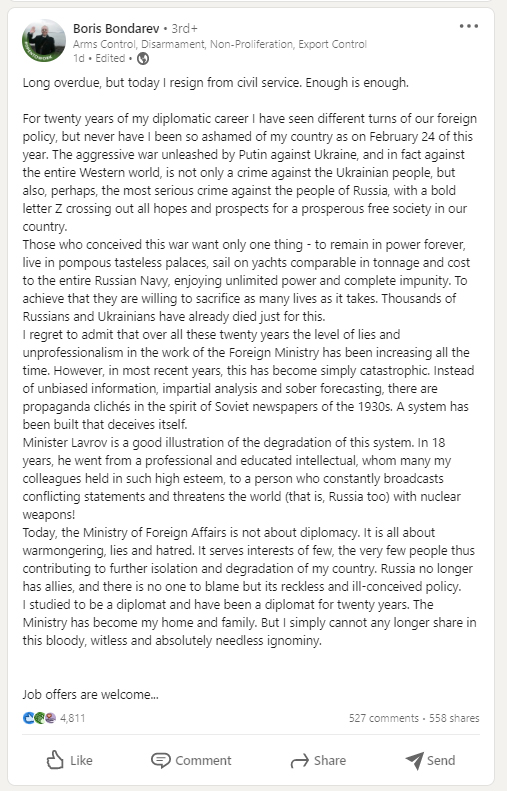 A resignation from a Russian diplomat conducted so publicly is rare if not entirely unprecedented under the Putin regime.  Despite Russia’s attempt at quashing public dissent by restricting media coverage of what it purports to be a “special military operation” to State media agencies, passing emergency laws to prohibit information contrary to State propaganda from being published and restricting access to the internet, discontent with Russia’s now 8-year long war on Ukraine is growing.  The sting is being deeply felt by the public as stringent sanction regimes have started to have an impact on the Russian economy.  A trusted Russian diplomat’s resignation in such a public manner will undoubtedly be noted throughout Russia but it is unlikely to have a serious deterrent effect on the Putin regime’s obduracy in employing warfare to achieve its political objectives.

Bondarev, 41, is a graduate of Russia’s most elite university training diplomats for service, Moscow State Institute of International Relations (University) MFA Russia MGIMO.  He has been a leader of Russia’s efforts as a diplomatic counselor concentrating on Russia’s role in the Conference on Disarmament in Geneva.  Bondarev previously held diplomatic posting in Cambodia and Mongolia.

According to the letter of resignation provided to the AP, Bondarev wrote, “For twenty years of my diplomatic career I have seen different turns of our foreign policy, but never have I been so ashamed of my country as on Feb. 24 of this year,” referring to the date of Russia’s invasion.  “[The war is] not only a crime against the Ukrainian people, but also, perhaps, the most serious crime against the people of Russia… crossing out all hopes and prospects for a prosperous free society in our country.”

Under Russian law, Bondarev could be prosecuted for “treason.”  On 27 February Russia’s Prosecutor General’s Office warned the public about what it characterised as “liability for state treason.”  According to the Prosecutor General, “treason” can be described as “help to other states if this harms Russia’s security.”  Moreover, Bondarev is aware of the plethora of extrajudicial executions, murders, poisonings and disappearances that have occurred during Putin’s 22-years in office, approximately the same amount of time Bondarev has been a member of the Russian Foreign Ministry.

Bondarev has admitted that he emailed a copy of his English-language resignation statement to approximately 40 diplomats and others, including members of the media.  In doing so he claimed the individuals serving Putin who planned and authourised the war “want only one thing — to remain in power forever, live in pompous tasteless palaces, sail on yachts comparable in tonnage and cost to the entire Russian Navy, enjoying unlimited power and complete impunity.”

His further comments included a critique about the goals of Russia’s foreign policy, “Today, the Ministry of Foreign Affairs is not about diplomacy. It is all about warmongering, lies and hatred.  I studied to be a diplomat and have been a diplomat for twenty years. The Ministry has been my home and family. But I simply cannot any longer share in this bloody, witless and absolutely needly ignominy.”

According to the AP, Bondarev has indicated he intends to remain in Geneva.  He posted his statement on his LinkedIn account with a line at the bottom saying, “Job offers are welcome…”