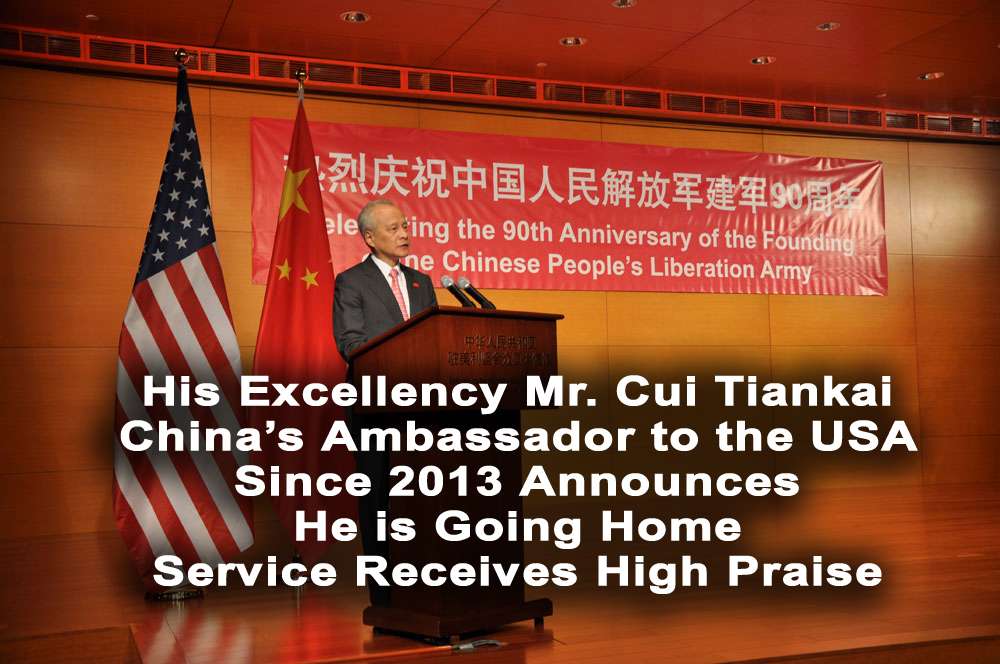 WASHINGTON, D.C. – On 22 June 2021, China’s most senior diplomat in the United States, His Excellency Mr. Cui Tiankai, having served since April 2013, announced on Twitter he will soon be retuning home to China.  He does so at a critical time in Sino-American relations.  The relationship is no longer one of a country with an advanced economy encouraging a developing country to embrace new ideas but one of the outright competition of economic rivals, if not soon to be equals.  Differences in political ideology continue to mark a sharp contrast between the two countries.

The relationship between the United States and China has long been fraught with difficulties.   Cultural, political and economic policies perennially saw the two nations vetting their differences.  The divide became markedly pronounced, however, as President Donald Trump continually used ‘less than diplomatic language’ when speaking about China.  Indeed, his language tended to range between dismissive to insulting.  He policies reflected his views of China, even if some were routed in the traditional complaints about trade practices, intellectual property rights, Taiwan and access in the South China Sea.

Still, and despite growing tensions, Cui will retire from his mission with almost universal recognition that he handled his portfolio with exceptional skill.

High Praise for China’s Long-Serving Ambassador to the US

Nonetheless, Cui was unable to parse the increasing vitriol that accompanied Trump’s ‘America First’ policies and rhetoric.  Some of those policies survive under President Joe Biden who has his own views on containing China’s growing influence on the world stage.  Albeit, former United States Ambassador to China, His Excellency Mr. Winston Lord, doled out high praise for Cui and his tenure in Washington, D.C..

According to Lord, who spoke to Voice of America (VOA) radio, “Ambassador Cui Tiankai has done an outstanding job in my view, during a very difficult period.  He’s been very strong in defending Chinese interests, of course, but he’s always done so with a sense of trying to encourage some sort of dialogue, even though we’ve got some sharp disagreements.”

Bonnie Glaser, the respected ‘think tank’ Director of the Asia Program at the German Marshall Fund in Washington, D.C., also speaking to VOA and gave Cui equally high marks.  Glaser noted that Cui’s approach was always respectful, but appropriate for maximum effect, “… Sometimes he was gracious.  Sometimes he used tougher language when that was appropriate.  He’s a very good diplomat and he adjusts his messaging based on the prevailing situation in the U.S.-China relationship.”

China has yet to announce Cui’s replacement.

Two Giants on the World Stage

Cui assumed his post in Washington at a time when the world spoke of China as a “developing” country juxtaposed with the United States historic wealth and international reach.  Over the near-decade he spent in the American capital, China’s stature in the world grew substantially.  Today, China is an economic powerhouse and a nation whose foreign policy reaches deep into still developing nations.  It is China’s growing influence in the developing world that seems to worry the Biden administration and G7 most.

Cui once said that the Sino-American relations were driven by “the ever-expanding converging interests between our two countries and the common responsibility that we share in safeguarding world peace, promoting sustainable development of the global economy.” Despite the mutuality of these interests, divergent priorities, parochial issues and international ambitions have seen the two countries devolve into what are possibly the most strained relations they have shared since before President Nixon’s 1972 détente visit to China.

Cui’s effective but traditional form of diplomacy may well have become archaic during his tenure in Washington, D.C.  A view has emerged of today’s Chinese diplomatic corps being trained as ‘Wolf Warriors’ (Chinese: 战狼外交).  The diplomatic corps has come to widely regard the new generation of Chinese diplomats as overly direct, if not blunt and wholly un-apologetic in their approach to espousing Beijing’s policies while engaging in international relations.  Many of the new breed of Chinese diplomats are wholly unapologetic about owning the moniker.

According to Lord, “Even though people would admire [China’s] economic progress, the wolf warrior approach to diplomacy, the repression at home, [hostile] actions abroad have meant a decline in how China is viewed around the world.”

Does Beijing Listen to Its Diplomats?

Beyond acting as the plenipotentiary of one’s country, all ambassadors and heads of mission generally carry the responsibility of providing their governments with their candid and considered insights into the character, motivation and insights into the nations in which they serve.  That includes their assessment of its leaders.  China, however, is assumed to have a ‘Party-Centric’ view of the world and therefore may not have been open to listening to Cui or its other emissaries around the globe.  This has been particularly true of China’s foreign policy Chairman Xi Jinping took power.

Lord echoed this sentiment.  Continuing his telephone interview with VOA, he observed, “I think the American ambassador has a somewhat easier time than the Chinese ambassador.  If our ambassador sends home frank views — for example, disagreeing with what Washington is doing, or perhaps saying that the Chinese point of view is reasonable — that will be respected.  He’s expected to be candid.  He shouldn’t need be overly belligerent or overly rosy in his views of his host country.  All he’s got to do is be honest.”  The Chinese ambassadors, meanwhile, “probably are going to have a more difficult time,” he said.  “It’s a lot more difficult politically for the [Chinese] ambassador here to go back to Beijing and say, ‘Look, you’re making a mistake,’ or that the American point of view is not unreasonable.”

Former United States Assistant Secretary of State for the Bureau of East Asian and Pacific Affairs David Stilwell, voiced his concern that much of the conflict that emerged between Beijing and Washington, D.C. had to do with their two competing, political cultures.  “I feel sorry for Ambassador Cui; he’s been between a rock and a hard place for the last eight years,” Stilwell said.  “As the man on the ground in D.C., he was responsible for telling Beijing what to expect from the new [Trump] administration.” As with Lord, Stilwell believes such candidness is not welcome as the centralised world-view held by the Party, in the person of the General Secretary, does not allow such input, which might be considered tantamount to criticism of the regime’s or party’s thinking.  “…Suggesting that General Secretary Xi [Jinping] needed to change course, to compromise, would be tantamount to criticism,” Stilwell continued. “In the cult of personality that surrounds Xi Jinping, criticism is not tolerated.”

Next Ambassador Appointed to D.C. to Reflect Beijing’s Priorities

Given the historic lows in relations between Beijing and Washington, D.C., and despite President Joe Biden’s commitment to multilateralism, a growing trend has emerged that dispenses with Beijing being described as a ‘competitor’ and treating China as an ‘opponent’ if not quite an ‘enemy’.  During the recent Group of Seven (G7) meeting in Great Britain, Biden pushed his partners to take a tougher stance on China.  Biden used the more candid language of ‘threat’ when speaking to his NATO partners during the same trip.

How effective Biden will be in drawing Europe closer to his world view remains uncertain.  The European Union famously proceeded to ink a major trade deal with China in December 2020, even after Biden urged the bloc to wait until he took office in January so he could consult with them.

Warming Ireland-China Relations
Recently, Ireland’s Foreign Minister, Simon Coveney, T.D., undertook ‘red-eye diplomacy’ by making a weekend jaunt across the world to visit Beijing.  Coveney is said to have greatly enhanced working relations between Beijing and Dublin with his skillful diplomatic approach.  However, critics claim he failed to uphold Ireland’s commitment to human rights by publicly confronting China on its human rights record, particularly the plight of the Uyghur’s, or more forcefully demand the release of Irish businessman Richard O’Halloran.  O’Halloran has been prevented from leaving China after having become caught-up in a commercial dispute with the Chinese owner of an aircraft leasing firm for which he works.

Coveney assured the family that he raised his concerns directly with his counterparts about the continued refusal to allow O’Halloran to return to his family in Ireland.  Coveney’s meeting with China’s Foreign Minister Wang Yi was part of a bilateral summit that took place as part of Ireland’s 2-year membership of the United Nations Security Council.