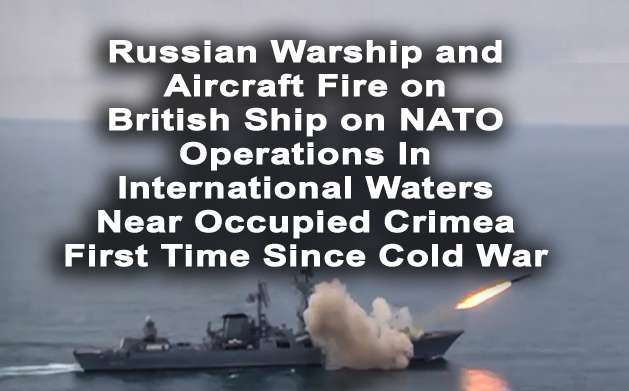 This article has been updated to reflect further information since the story broke.

MOSCOW – The Russian Defense Ministry announced that it ordered a Russian warship to fire ‘warning shots’ across the bow of a British destroyer, HMS Defender, operating in free, Ukrainian waters near Crimea in the Black Sea.  Russia has claimed unusually broad water navigation controls over the region since it occupied Crimea by force and attempted to illegally annex Crimea from Ukraine in 2014.  The United Nations and the European Union, including Ireland, do not recognise Russia’s claim to these waters and continue to uphold Ukraine’s internationally recognised borders, including maritime boundaries.

According to the Moscow controlled TASS news agency, Russian forces also used a warplane to drop munitions near the British destroyer.  Initially presumed to be a Russian Ilyushin Il-38 “Dolphin” maritime patrol aircraft operating from occupied Crimea, the Russian Ministry of Defense now states it was a Su-24M attack jet.  The use of deadly force, deployed ‘danger close’ to a NATO vessel is a harbinger of Russia’s determination to use military force of arms to maintain their internationally condemned occupation of Crimea and attempt to control all navigation in the Black Sea.

Speaking through the Ministry of Defense, the United Kingdom released a carefully worded response in which they state the HMS Defender was on a “legal and innocent passage.”  The Ministry of Defense statement further stated, “No shots were directed at HMS Defender and we do not recognise the claim that bombs were dropped in her path.”  A UK government spokesman later attempted to downplay any hostile acts by the Russians, weakly asserting they were simply engaged in “gunnery exercises” in the Black Sea.  It would not be customary for live-fire exercises to take place so close to an announced, planned sailing route of either military or civilian shipping.

The United Kingdom, which enjoys the support of Ukraine, insisted the HMS Defender was taking the shortest, most direct route across the Black Sea, from Odessa, in Ukraine, to Georgia.

Despite the United Kingdom’s denials, a BBC Defence Correspondent, Jonathan Beale, imbedded on the HMS Defender at the invitation of the Ministry of Defense, reported the ship was shadowed and harassed in the Black Sea by Russia’s military.  During a video recording of one of Beale’s reports, Russian aircraft can be heard and seen ‘buzzing’ the HMS Defender.  Beale also reported hearing artillery fire.  The Ministry of Defense has not explained why they claim the Russian military did not fire warning shots at the HMS Defender.  A statement from the BBC reported the following, “Our correspondent, who had been invited on board the ship before the incident happened, saw more than 20 aircraft overhead and two Russian coastguard boats which at times were just 100m (328ft) away.  This is at odds with statements from both the British prime minister’s office and defence ministry, which denied any confrontation.”

Beale’s reporting also included his account of being on-board the battle bridge when the Russian navy radioed the abundantly clear threat, “If you don’t change course I’ll fire.”  The unequivocal threat by the Russian military to a NATO ship navigating in internationally recognised Ukrainian waters portends growing tensions and Russia’s future intent to challenge shipping with the use of force.

Russia has been attempting to strangle the maritime shipping of both Ukraine and Georgia through the Black Sea, further causing them economic harm following their use of force to occupy territories of both nations.  Georgia has suffered Russian occupation and continuing aggression in approximately 20% of its territory since 1992.  Russia led military forces to occupy parts of Eastern Ukraine and Crimea in 2014, eventually attempting to illegally annex Crimea.  The Russian occupation of these territories continue with Georgians suffering continued aggression and Ukraine now suffering more than 13,000 casualties and in excess of 1.5 million internally displaced persons because of Russia’s occupation.   Russia is now the target of war crimes investigations by the International Criminal Court.

Such aggression by Russian forces comes on the heels of the recent announcement that London and Kyiv reached agreements on cooperation on military ship building to bolster Ukraine’s naval capacity in the region.  United Kingdom warship builder Babcock executed what was described as a ‘Tripartite Memorandum of Implementation’  with the Ukraine Ministry of Defense and the British Government.  The Agreement was signed when HMS Defender, a Royal Navy Type 45 destroyer, conveyed a delegation of senior British officials, including the head of the British Navy and the Naval Procurement Minister, during a visit to Ukraine.  The Memorandum of Implementation follows on a prior agreement reached between London and Kyiv in October 2020.

Firing warning shots by sea and dropping bombs by air represent and alarming escalation by Russia against the West, specifically targeting a NATO vessel whose navigation route and training plan was provided to Russia in advance of entering the area.  Such provocation marks the latest hostile act at sea by Russia since it lost a case in the International Tribunal for the Law of the Sea after illegally seizing 3 Ukrainian vessels and their crews.
As reported earlier by Miceal O’Hurley, in 2020, Russia began escalating the number of maritime patrols off of Irish coasts using anti-submarine aircraft.
Tags: AircraftBlack SeaCrimeaFIreITLASJoe BidenMiceal O'HurleyMoscowNATONavyPutinRussiaUkraine