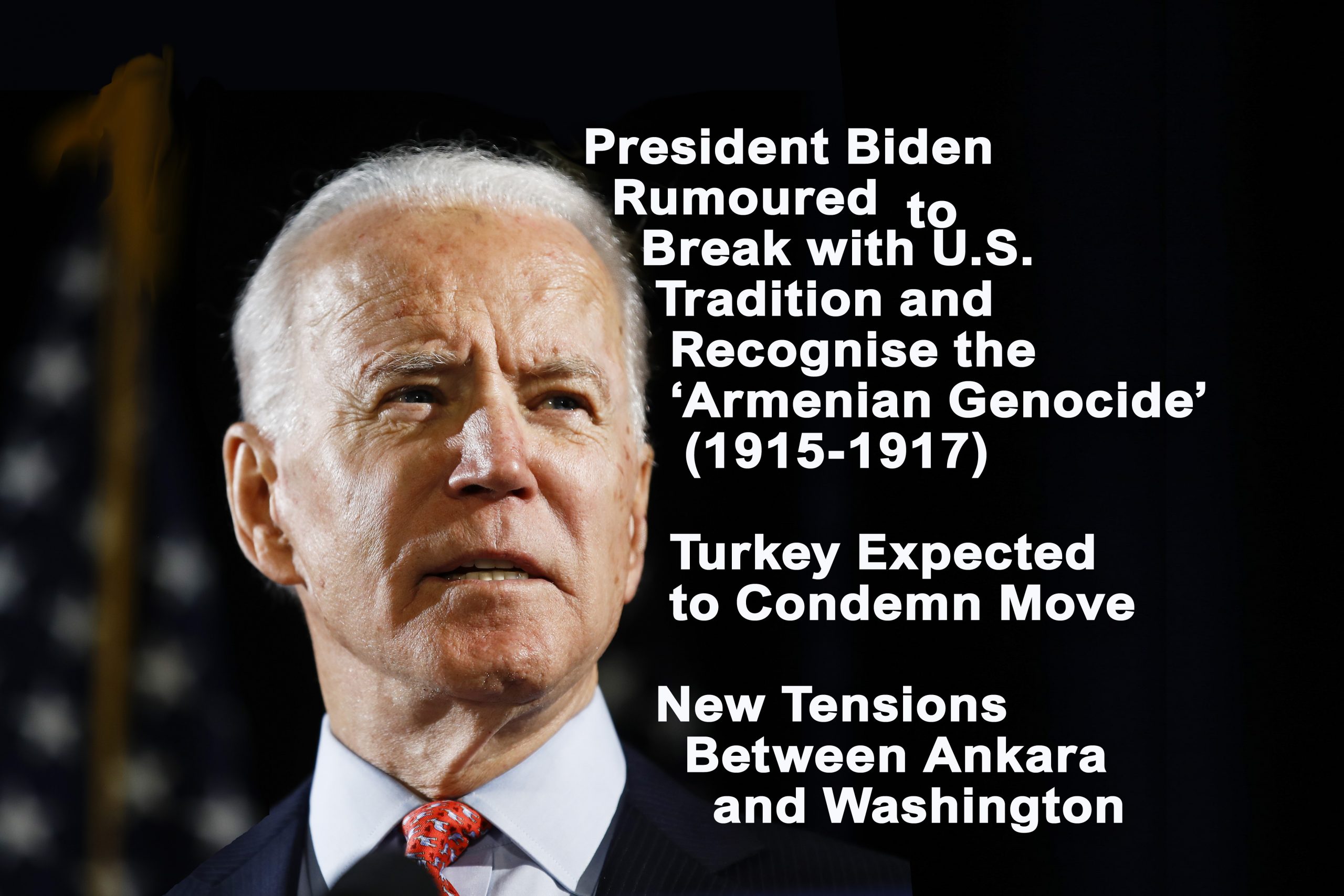 Washington, D.C. – According to a report by The New York Times, tomorrow, President Joe Biden will break with the White House’s long-held position of refusing to characterise the deaths of 1.5 million Armenians by Ottoman Turkey (1915-1917) as the Armenian Genocide.  The world will hold annual commemorations of the ‘Armenian Genocide Remembrance Day’ held annually 24 April.

The historical narrative has held that 24 April 1915 marks the day when the Ottoman authorities rounded up, arrested, and deported hundreds of Armenian intellectuals and community leaders from Constantinople (now Istanbul).  Turkish paramilitaries carried out a deadly retaliatory campaign against Armenians after the battle of Srakamish in which Armenians within the Empire were blamed for the Ottoman defeat through treachery.  Talaat Pasha, the de facto leader of the Ottoman Empire during World War I, is held to have ordered ethnic Armenians, as well as Syriac and Greek Christians, to be sent on “death marches” into the Syrian Desert between 1915-1916.  The expulsion of ethnic Armenians, Greeks and Syriac Christians from Turkey and the Anatolia region at the hands of the Ottoman Turks, in which many suffered robbery, rape, degradation, starvation and death followed the paramilitaries massacres.  Those who survived the expulsion into the Syrian Desert were placed in concentration camps only to suffer further massacres during detention.  Between 100,000 – 200,000 Armenian women and children were reportedly forced to convert to Islam in order to survive while male Armenians were murdered.   Ottoman Turkey’s ethnic cleansing of Armenians is reported to have continued throughout World War I and the War of Independence in Turkey that followed the war.

The Republic of Turkey strenuously denies that the deaths of the Armenians, as well as Syriac and Greek Christian minorities under Ottoman control, was genocide.  It has long been argued by Turkey that ethnic Armenians, Greeks and Syriac Christians, were resettled just as Canada, the United States and other combatant powers in World War I segregated ethnic Germans and other suspect nationalities.  While not denying the deaths in general, Turkey has pointed to Armenians being combatants against the Ottoman Empire, being engaged in their own paramilitary activities, dying from general starvation which effected millions in Europe during the war, and dying from disease, bad weather, rogue local officials, Kurdish militants and being victims of the bloody civil war that raged in the aftermath of World War I.

Over the years, the United States Congress has considered non-binding Resolutions proclaiming the deaths of the Armenians to be a genocide.  However, United States Presidents have declined to characterise the loss of lives as genocide to preserve the United States’ relationship with its NATO ally, the Republic of Turkey, the successor State to Ottoman Turkey.  However, it now is rumoured by White House and National Security insiders in Washington, D.C. that President Joe Biden will release a Statement on Saturday, 24 April 2021, fulfilling his promise to the Armenian community in America to formally recognise the deaths of the millions of Armenians who met their demise during this period as an act of genocide.  While President Biden may still change his mind, as did President Barak Obama who pledged to recognise the Armenian Genocide as a candidate, but refused to do so as President, the Department of State has purportedly asked the United States diplomatic corps to prepare their host nations for the announcement.

All but one of the fifty States in the United States, as well as scores of countries including key US allies and fellow NATO members such as France, Germany, and Canada, have recognized the deaths of the Armenians as genocide.  In 2019, both the House and the Senate passed non-binding resolutions recognising the deaths as genocide.

Should President Biden follow through and proclaim the United States recognises the ‘Armenian Genocide’, it will assuredly exacerbate the rapidly deteriorating bilateral relations with Turkey that have marked the past few years.   While United States President Ronald Regan did once refer to the “genocide of Armenians” in a 1981 statement related to the Holocaust, Presidents have thereafter refrained from using the word ‘genocide’.

The Republic of Turkey’s Foreign Minister, Mevlut Cavusoglu, told and interviewer on the Turkish broadcaster Haberturk earlier this week, “Statements that have no legal binding will have no benefit, but they will harm ties….. If the United States wants to worsen ties, the decision is theirs.”

International relations analysts have noted that despite the long history of positive bilateral relations between the United States and Turkey, albeit strained of late, observing that President Biden has yet to speak with Turkey’s President, Recep Tayyip Erdoğan.

Diplomat Ireland has asked the White House and Foreign Ministry of the Republic of Turkey for comment prior to publication without a response.

This is a developing story.

Minister Coveney Announces €200,000 in Response to St. Vincent and the Grenadines Volcanic Eruption