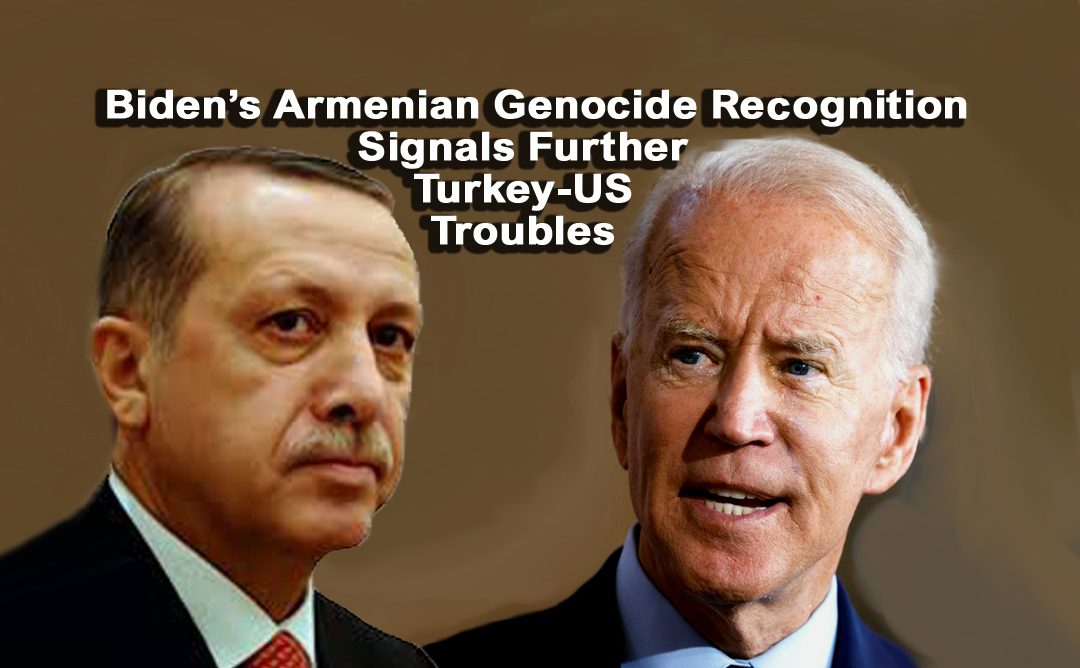 WASHINGTON, D.C. and ANKARA — As reported by DiplomacyIreland.eu on Friday, United States President Joe Biden followed through with the pledge he made while campaigning for the White House and formally acknowledged the death of more than 1.5 million ethnic Armenians between 1915-1917 as ‘Genocide’.   Previous United States Presidents have declined to define these deaths, along with those of Assyrians (Syriac) and Greek Christians as genocide while acknowledging the events, largely in deference to the historically warm relationship shared with their NATO ally, Turkey.

Turkey continues to deny that the deaths were acts of genocide, instead pointing to the events of World War I, a civil war that arose from the war, famine, isolated acts by errant local officials and other events contributing to the deaths.  Turkey’s President, Recep Tayyip Erdoğan, issued a Statement commemorating the loss of lives in the Ottoman Empire during this period which was read out at the commemoration services of the Armenian  Patriarchate of Constantinople (Istanbul) on 24 April 2021 – a date annually celebrated as “Armenian Genocide Remembrance Day’ by Armenians and some countries.  President Erdoğan’s Statement “commemorated the cherished lives” lost during the period but did not use the term genocide.

The move by the Biden Administration is certain to add to the fraught relations with Turkey which have increasingly grown conflicted over the past several years.  In July 2016, an attempted coup d’état took place in Turkey, largely led by elements of Turkey’s military, supposedly with links to dissident Turkish businessman Fethullah Gülen. Gülen, who lives in the United States, was accused of orchestrating the coup resulting in Turkey demanding the United States extradite him to Turkey, with Washington, D.C. refusing, drawing Turkey’s ire.  In 2017, Erdoğan concluded a multi-billion dollar deal with Russia’s President, Vladimir Putin, to provide Russis S-400 mobile surface-to-air missile system to Turkey.  The United States terminated Turkey’s participation in the F-35 fighter jet platform out of concern that its secrets would be provided to the Russians, breaching NATO practices and agreements.  Despite NATO and United States warnings, Turkey received delivery of the first S-400 missile batteries, leading to further strain between Washington and Ankara.

DiplomacyIreland.eu is producing the Statement of United States President Joe Biden regarding the ‘Armenian Genocide’ below, in its entirety.

DiplomacyIreland.eu was understandably unable to speak with His Excellency Mehmet Hakan Olcay, Ambassador-designate of the Republic of Turkey Embassy to Ireland owing to his not having yet had an opportunity to present his credentials as Ambassador Extraordinary and Plenipotentiary to President Michael D. Higgins at Áras an Uachtaráin.  It is customary for Ambassadors to refrain from engaging in public diplomacy or conducting media interviews prior to presenting their credentials and being received by the President.  However, DiplomacyIreland.eu was able to obtain a Statement from the Embassy of the Republic of Turkey in Dublin on behalf of the Foreign Ministry of Turkey which we have also published below, in its entirety.

Each year on this day, we remember the lives of all those who died in the Ottoman-era Armenian genocide and recommit ourselves to preventing such an atrocity from ever again occurring. Beginning on April 24, 1915, with the arrest of Armenian intellectuals and community leaders in Constantinople by Ottoman authorities, one and a half million Armenians were deported, massacred, or marched to their deaths in a campaign of extermination. We honor the victims of the Meds Yeghern so that the horrors of what happened are never lost to history. And we remember so that we remain ever-vigilant against the corrosive influence of hate in all its forms.

Of those who survived, most were forced to find new homes and new lives around the world, including in the United States. With strength and resilience, the Armenian people survived and rebuilt their community. Over the decades Armenian immigrants have enriched the United States in countless ways, but they have never forgotten the tragic history that brought so many of their ancestors to our shores. We honor their story. We see that pain. We affirm the history. We do this not to cast blame but to ensure that what happened is never repeated.

Today, as we mourn what was lost, let us also turn our eyes to the future—toward the world that we wish to build for our children. A world unstained by the daily evils of bigotry and intolerance, where human rights are respected, and where all people are able to pursue their lives in dignity and security. Let us renew our shared resolve to prevent future atrocities from occurring anywhere in the world. And let us pursue healing and reconciliation for all the people of the world.

The American people honor all those Armenians who perished in the genocide that began 106 years ago today.   ###

We reject and denounce in the strongest terms the statement of the President of the US regarding the events of 1915 made under the pressure of radical Armenian circles and anti-Turkey groups on 24 April.

It is clear that the said statement does not have a scholarly and legal basis, nor is it supported by any evidence. With regards to the events of 1915, none of the conditions required for the use of the term “genocide” that is strictly defined in international law are met.

The nature of the events of 1915 does not change according to the current political motives of the politicians or domestic political considerations. Such an attitude serves only a vulgar distortion of history.

The European Court of Human Rights has clearly confirmed the controversial nature of the events of 1915. Moreover, in 2005 Turkey proposed to Armenian side to establish a Joint History Commission in order to reach a just memory in the light of historical facts of that period. Although Armenia has never responded to this proposal, it is still on the table. In this respect, the statement made by the President of the US, who is neither legally nor morally authorized to judge historical matters, has no value.

As a country located at the center of a region that is called as the cradle of civilizations and who has adopted the attitude of exercising effort for the peace and serenity for humanity despite all her sufferings, Turkey has never avoided facing her history and would not take lessons from any country, including the US, in this regard.

On this occasion, we once again commemorate the cherished memories of the individuals from all the Muslim, Christian and Jewish communities of the Ottoman Empire, who lost their lives under the extraordinary conditions of the period before and during the First World War. The message conveyed by President Recep Tayyip Erdogan on 24 April, for the Ottoman Armenians who lost their lives at the First World War which was read during the liturgy at the Armenian Patriarchate in İstanbul, this year as well, reflects the approach of Turkey on this topic.

After more than a hundred years of this past suffering, instead of exerting sincere efforts to completely heal the wounds of the past and build the future together in our region, the US President’s statement will not yield any results other than polarizing the nations and hindering peace and stability in our region.

This statement of the US, which distorts the historical facts, will never be accepted in the conscience of the Turkish people, and will open a deep wound that undermines our mutual trust and friendship.

We call on the US President to correct this grave mistake, which serves no purpose other than to satisfy certain political circles and to support the efforts aiming to establish a practice of peaceful coexistence in the region, especially among the Turkish and Armenian nations, instead of serving the agenda of those circles that try to foment enmity from history.’  ###

__________________
Editorial Note – Out of full disclosure, Editor-in-Chief Miceál O’Hurley previously served as Counsel in the United States Congress and as pictured above, served as the Spokesperson for the Pontifical Visit of His Holiness Karekin II during his visit to the United States Capitol and his tour of the Eastern Diocese of the Armenian Church of America.  He also organised and presided over the memorial event in New York, along with the Committee to Protect Journalists and the New York Times, for his colleague and fellow journalist Hrant Dink after his assassination in Sisli, Istanbul.  Miceal, in his capacity as a Congressional staffer, and as a journalist covering the First and Second Gulf Wars, has been a guest of the Republic of Turkey on several occasions dealing with issues of defense and security.