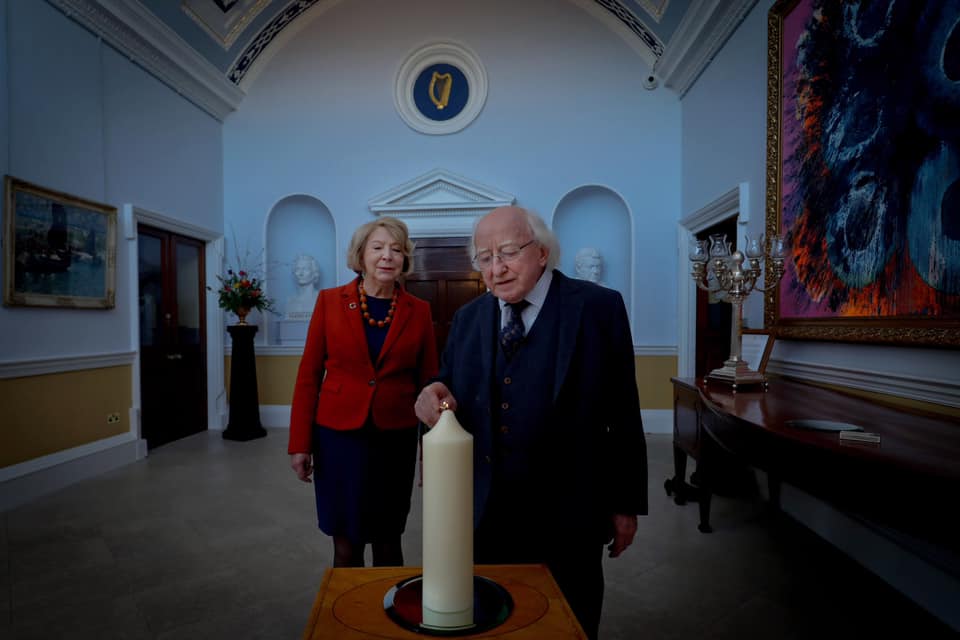 DUBLIN – Today, 26 April 2021, marks the 35th anniversary of the 1986 Chernobyl nuclear disaster.  To commemorate the occasion, President Michael D. Higgins was joined by his wife, Sabina, to lead the Chernobyl Children International Global Candle Lighting Campaign to recognise the extraordinary contribution the people of Ireland have made to the victims of the Chernobyl disaster.

This year, Adi Roche’s Chernobyl Children International has coordinated with dignitaries from across the globe, including politicians, ambassadors, environmental activists, humanitarian campaigners and international celebrities to light a candle to send a message of hope to the victims of Chernobyl.  The event was designed to send a clear message to the victims of the nuclear disaster to say ‘We will not forget you’.  By sharing the photographs online and through social media, using the hashtags #IWillNotForgetYou and #Chernobyl35 people throughout the world are invited to join in to honour and pay homage to the unstinting and unwavering contributions rendered by Irish volunteers and the Irish people over the past three-and-a-half decades.

The Chernobyl Power Complex, situated in Ukraine about 130km north of Kyiv also lies about 20km south of the Ukrainian border with Belarus.  The complex consisted of four nuclear reactors of the fatally flawed RBMK-1000 design, each built in stages in the 1970s.  In April 1986, Reactor No. 4 failed, resulting in a massive nuclear ‘melt down’ caused by a series of reckless operator actions, including the disabling of automatic shutdown mechanisms.

After an initial explosion in the core which immediately killed two workers, between 200-300 tonnes of water per hour were injected into the core in a vain attempt to cool the reactor.  Operators and workers at the complex, along with the first responders called to the scene were exposed to lethal amounts of radiation in the hours and days following the event.

The disaster caused the largest uncontrolled radioactive release into the environment ever recorded for any civilian operation.  Large quantities of radioactive substances were released into the air for about 10 days, poisoning the region, the effects of which are still felt today.  In Moscow, an attempt at cover-up began despite the huge spikes in radiation being detected throughout Europe, with isotopes of the type expected from a RBMK-1000 reactor.

The World Nuclear Association states, “According to the most up-to-date estimate provided by the United Nations Scientific Committee on the Effects of Atomic Radiation (UNSCEAR), the average radiation dose due to the accident received by inhabitants of ‘strict radiation control’ areas (population 216,000) in the years 1986 to 2005 was 31 mSv (over the 20-year period), and in the ‘contaminated’ areas (population 6.4 million) it averaged 9 mSv, a minor increase over the dose due to background radiation over the same period (about 50 mSv)”.

The town of Pripyat, where 45,000 of the operators and their families lived, was evacuated and remains a ‘no go’ zone due to lingering radioactivity.  There has been significant difficulty in accurately determining the total eventual number of exposure related deaths because of the Chernobyl disaster.  Various scientific models for determining the death toll from Chernobyl range from between 4,000 and 16,000 people from the region and across Europe.  However, birth defects continue to plague the region and long-lasting health effects are still being evaluated.

According to their website, Adi Roche’s Chernobyl Children International restores hope, alleviates suffering & protects current and future generations in the Chernobyl regions, by passionately advocating the rights of all of those affected.