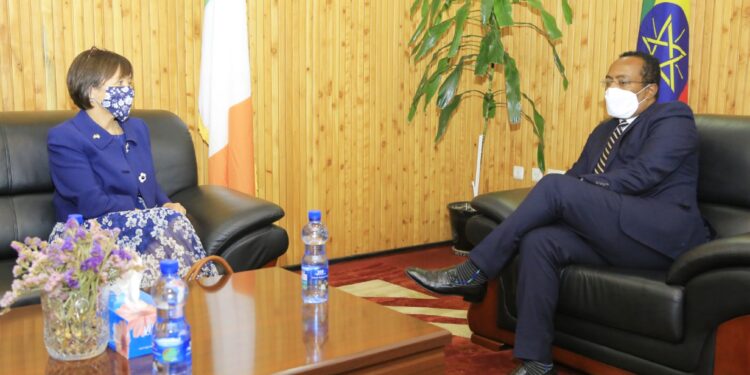 ADDIS ABABA – On Monday, 22 November 2021, the Government of Ethiopia summonsed Ireland’s Ambassador to Ethiopia and informed Her Excellency, Nicola Brennan that four of the six Irish Embassy staff in Addis Ababa must depart the country within the week.  Ambassador Brennan and one other staffer will be permitted to remain.  It remains unclear if the Irish Embassy personnel in Ethiopia were officially declared persona non grata.

Ethiopia’s reasoning for ordering a scaling-down of the Irish Embassy staff in Addis Ababa was indicated as being a retaliatory measure for the positions Ireland has articulated internationally, including at the UN Security Council, about the ongoing conflict and humanitarian crisis in Ethiopia.  According to Minister for Foreign Affairs Simon Coveney, T.D., “Our engagement internationally on Ethiopia, including at the Security Council, has been consistent with the positions and statements made by the European Union, including by the EU High Representative/Vice President Josep Borrell”.

Diplomacy in Ireland – The European Diplomat has reported extensively on Ethiopia’s descent into chaos, beginning with the Government’s claim of legitimate law enforcement activities directed against Tigrayan separatists who refused to recognise the Government in Addis Ababa to Ethipia’s growing humanitarian crisis to Prime Minister’s Abiy fall from Grace as a Nobel Peace Prize recipient to an international pariah.  The Diplomacy in Ireland – The European Diplomat Awards Committee has chosen to honour the United Nations Team in Ethiopia in the 2021 awards for their work in reducing the humanitarian crisis in Ethiopia.

Ethiopia, which is experiencing a severe humanitarian crisis, especially in the Tigray region where combat operations have caused millions to flee to neighbouring countries, is the largest recipient of Irish Aid funds and has been so for the last 5-years.  Intense fighting has resulted in widespread displacement, food insecurity and a lack of access to basic medical care for millions of Ethiopians.  Claims of militias conducting ethnic cleansing operations and accusations of genocide abound.

Ireland is continuing to work with the African Union’s Special Envoy, former Nigerian President Olesegun Obasanjo in efforts to reduce conflict, stabilise the humanitarian crisis and pursue a peaceful resolution of the conflict.  In light of the Ethiopian Government’s demand that Ireland reduce is diplomatic presence in Addis Ababa, which was established in 1994, Minister Coveney warned Irish citizens to depart the country, “In the context of the deteriorating security situation in Ethiopia, the focus of Embassy will be the provision of consular services, although the reduction of our diplomatic staff numbers by two thirds will inevitably affect our ability to fully provide such services.  We recommend against all travel to Ethiopia and Irish citizens in Ethiopia should leave the country by commercial means immediately.”

Notwithstanding the expulsion of Irish diplomatic and consular staff, Minister Coveney remained adamant that Ireland intends to continue to play a role in the reduction of humanitarian suffering, “We will maintain our solidarity with the people of Ethiopia as the humanitarian crisis worsens. In the coming weeks, Irish Aid will disburse €16 million to humanitarian partners operating in Ethiopia including UN OCHA, UNICEF, UNFPA and the International Rescue Committee.”  Ireland has donated more than €165 million in direct aid support to Ethiopia in the last 5-years.

Meanwhile, Ambassador Brennan is focused on assisting Irish nationals to depart Ethiopia and continuing to ensure that aid reaches its intended recipients.  Ambassador Brennan serves as Ireland’s Ambassador to Ethiopia, South Sudan and Djibouti.  Concomitantly, she remains Ireland’s Representative to the African Union, the Inter-Governmental Authority on Development (IGAD) and the UN Economic Commission for Africa (UNECA).