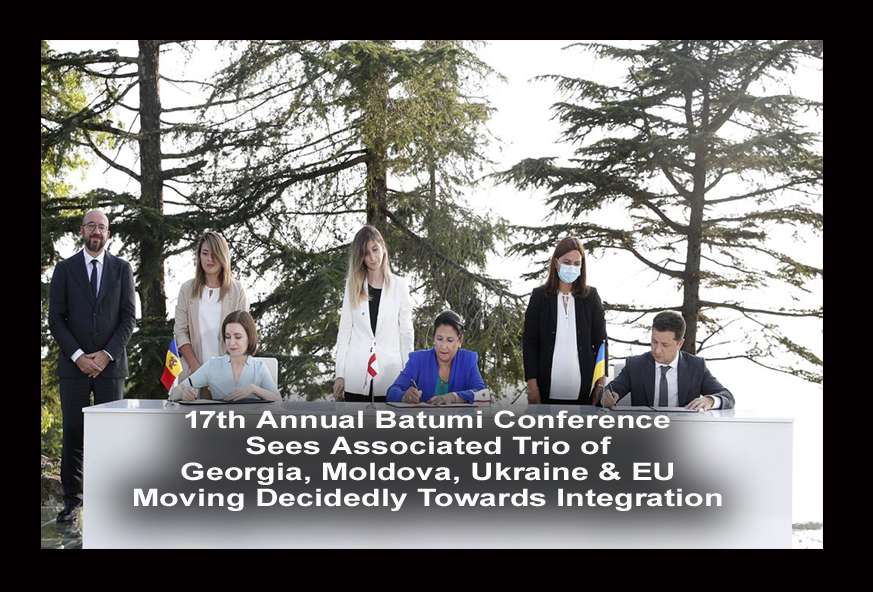 BATUMI – The idyllic seaside city of Batumi was the perfect setting for the 17th Annual Batumi Conference on Monday, 19 July 2021.  The Presidents of Georgia, Moldova and Ukraine and panels of European and transatlantic experts gathered to discuss the three nations onward march toward integration into the European Union.  The presence of European Commission President Charles Michel as the opening speaker gave voice to Europe’s warm embrace of the Trio and their integration aspirations.

Armenia, Azerbaijan and Belarus are also members of the Eastern Partnership (EaP).  However, none of these three countries have pursued integration with Europe with any noticeable commitment.  By sharp contrast, Georgia, Moldova and Ukraine have earned a nickname by admirers in Europe, the ‘Trio’.

Batumi is Georgia’s second largest city and is situated on the Black Sea coast.  The city’s cultural heritage runs deep as demonstrated by the colossal statue of Princess Medea, the daughter of King Kolkhetian, from whom Jason and his Argonauts stole the mythic Golden Fleece.  Georgia is a principle destination for the Greek adventurers in the ancient tale.

European Commission President Charles Michel opened the Batumi Conference, an annual gathering and strategic integration platform for Georgia, Moldova and Ukraine.  His remarks hailed the use of the Eastern Partnership by the Trio as a “…locomotive for transformation, prosperity and growth”.

Noting the challenges and lauding Georgia, Moldova and Ukraine’s success at having maintained independence and nurturing democracy for 30 years, in what President Michel called “One generation of hard won progress…”, he also acknowledge the difficulties.  “It has not been an easy journey, with periods of destabilisaiton and conflicts, with your countries facing interference or aggression”, noted President Michel.  Albeit, President Michel reiterated Europe’s unswerving commitment to Georgia, Moldova and Ukraine, boldly adding, “The EU stands by you in full solidarity”.

The mood was remarkably elevated from previous years, despite Russian aggression continuing in Georgia, Moldova and Ukraine.  Participants privately voiced a sense that the Trio’s integration into the European Union was no longer simply possible, it is now probable.  Against this remarkable and enduring attempt to destabilise each of the three nations, each has prevailed and sustained their commitment to democracy.  Even in the face of significant adversity, Georgia, Moldova and Ukraine have continued the march towards the European tradition of liberal democracy by enacting far-reaching reforms.

Still, reform remained at the top of the agenda.  One panelist, Bruno Lété of the German Marshall Fund of the United States, when asked for his advice to each country, hammered home the point, “Reform, reform, reform”.

A clear take-away from the Batumi Conference was the sense that the Trio embrace the value of reform.  The maturity of the value of reform no longer simply appears as a decrement to be achieved on the path to European Union membership but has become and inherent and indispensable value in each nation’s natural development.  Polling in each of the nations show that for people between the ages of 18-50, reform ranks as one of their highest domestic priorities.  More importantly, reform is now universally recognised by the Trio as a significant bulwark in protecting themselves from external disruption and destabilization.  This is especially evident in the age of hybrid-warfare wielded against each by the Putin regime in Moscow where despite widespread corruption in the kleptocracy that is Russia, the Kremlin uses media manipulation and social media exploitation to depict the Trio as adverse to reform.  The evidence tells a different story.

The Prague Summit in 2009 laid the groundwork for launching the Eastern Partnership.  Only 12 years later, the benefits to Georgia, Moldova and Ukraine are as abundant as they are for Europe and all transatlantic partners.  Repeatedly, the conferees restated the benchmarks that have already been achieved in forging stronger freedom, democratic processes and promoting fundamental European values.  Again, referring to earlier Batumi Conferences, there was an overwhelming sense that the gathering was not simply a forum to reiterate compliance achievements but rather was serving as a catalyst to supercharge the Trio’s integration into the European Union specifically because of those achievements.  Europe’s financial commitment and closer coordination with Georgia, Moldova and Ukraine demonstrates that Europe is more convinced than ever that the Trio will become European Union members in the near term.  The momentum is abundantly clear.

The next Eastern Partnership Summit is scheduled to take place in Brussels this autumn.

The Batumi Conference provided an opportunity for experts from both Europe, the Eastern Partnership countries and transatlantic supporters to address future cooperation.  Three demanding areas were specified for accelerated cooperation – economic growth, climate change and digital transformation.  Underpinning all efforts remained the paramount commitment to inclusive societies, good governance and the rule of law.  These values all have ambitious goals for any nation to achieve, especially while guarding against the omnipresent threat of external destabilisation.

If reform was a watchword, free trade stood out as the Trio’s beacon of progress.  From the outset of the Eastern Alliance in 2009, free trade has increased in all three nations by significant amounts.  Free trade has grown by as much as 45 percent in some sectors – a remarkable achievement by any measure.  The European Union is now the largest single trading partner of each Georgia, Moldova and Ukraine.

Visa free travel continues to be an equal boon to each of the three nations as much as it is for the European Union.  Increased cooperation on travel, tourism and participation in the Erasmus Programme has greatly contributed to a new generation of young people, who self-identify as European, experiencing enhanced cross-cultural understanding and values.  Remarkably, more than 80,000 talented young people from Georgia, Moldova and Ukraine have participated in the Erasmus exchanges over the past few years, studying and experiencing countries from Ireland to Germany and Poland to Italy.

Beyond recounting how the past has been shaped by increased cooperation, trade and exchanges, the Batumi Conference was explicitly fixed upon its ability to have a positive impact on the future.

In demonstration of their growing acknowledgment of the progress of the Trio towards European integration, the bloc has committed to a sizable economic investment package.  President Michel called the investments “flagship initiatives for each partner country”.

Supported by an aggressive €2.3bn European fund, which could be enhanced by up-to €17bn through public and private investments in the three Eastern Partnership nations of Georgia, Moldova and Ukraine, Europe is demonstrably staking its future in these three countries through massive transportation interconnectivity enhancements and capital infrastructure projects.  These European-Eastern Partnership projects offer the realisation of enhanced travel, increased trade and intrinsic deterrent from external destabilisation – all with lavish funding to be completed on an ambitious timeline for completion in 2030.

The increasing interconnection between Georgia, Moldova, Ukraine and the rest of their European neighbours will finally be reflected by the physical infrastructure and state-of-the-art transportation network investments to be erected.  That Europe is making this possible in under a decade demonstrates the expectation of the Trio’s integration.

It is undeniable that the already impressive and still growing belief amongst the populations of Georgia, Moldova and Ukraine that their future lies in

Europe is now matched by Europe’s belief that the nations should be integrated.  Challenges remain and significant work still needs to be done.

Strategic policy analysts overwhelmingly agree that Russia’s attempt to subdue the Trio, destabilise each nation and deter them from their destiny in Europe has only worked against Putin’s goal of re-assembling a mirror of the former Soviet Union.  Indeed, Russian military attempts to physically subdue Georgia, Moldova and Ukraine, accompanied by an endless stream of cyber-attacks and media manipulation have only served to reignite a thirst for freedom and national self-determination within the context of European values amongst the general populations.  Moreover, Russia’s aggression has decidedly turned Eastern Europe’s youth against the heavy-handed and autocratic model offered by Putin and the Kremlin.

This reality was reflected in the strikingly unified joint statement issued by President Salomé Zourabichvili of Georgia, standing beside President Maia Sandu of Moldova and joined by Ukraine’s President Volodymyr Zelenskyy.  Not only was the statement significant, but it was joined by the visuals too.  The opening ceremony photograph shows the Presidents of Georgia, Moldova and Ukraine standing with a smiling European Commission President Charles Michel.  The smiles and jovial atmosphere appeared genuine and not simply the performance act of participants.  In this 17th Batumi Conference the mood was markedly different than previous years – it carried with it a sense of telos – pregnant with possibility and maturity.

The Host of the event, President Salomé Zourabichvili, summed up the mood and momentum well, “A common past, common challenges to our sovereignty and territorial integrity, common challenges to our security and those destabilization attempts that can come from outside forces, as well as from internal forces,” Zourabichvili said. “But we have in common also that we do not want to return to the past. We are ready and determined to fight for our European future.”

Even the European Union now acknowledges that no third party, by coercion or force, will succeed in thwarting the self-determination of Georgia, Moldova or Ukraine from realising their destiny at the heart of Europe.