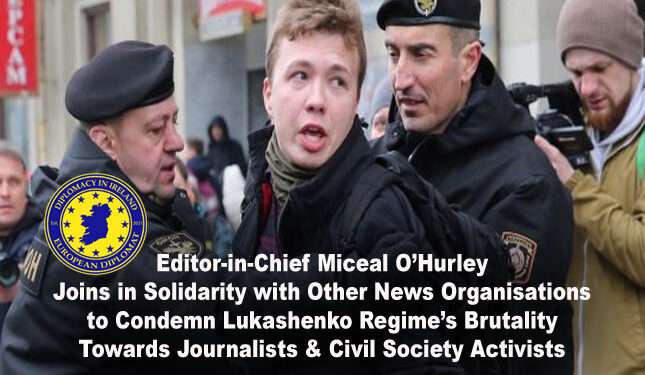 MINSK – The International Association of Press Clubs (IAPC) has expressed its alarm by yet another wave of repression directed at Belarusian independent media.  According to the IAPC Media Release, the organisation appeals to those in power in Belarus to stop the purge and the attack on the freedom of speech.  Journalism as a profession is being eliminated in Belarus. ‘Purging the media’ is no longer merely a metaphor – it is a dangerous reality under the Lukashenko regime and his Russian partners.

The Belarusian KGB, acting on the explicit orders of the Lukashenka regime, openly stated that “A large-scale operation is being carried out to purge radicals.”  Under the guise of this “purge”, security forces attacked at least 12 media organisations throughout Belarus between 8-9 July 2021.  The brutal raids were again renewed between 12-13 July.

In this third known wave of repression against independent media since August 2020.  It has been the policy of the Lukashenko regime and the KGB to treat all non-state journalists working in Belarus as designated ‘radicals‘.

The results are overwhelming repressive.  Dozens of freelance journalists have been detained and harassed and the public is being systematically deprived of all but the propaganda of the ‘Last Dictator in Europe’, Lukashenko’s authorised ‘news’.   As from November 2020, 29 media workers remain in jail, many subjected to torture, deprived of human contact and almost all are deprived of effective or independent legal representation.  All face criminal charges.  Three journalists are known to have already been convicted for simply doing their job – reporting the news.

Diplomacy in Ireland – The European Diplomat stands in solidarity with the entire leadership of Press Club Belarus that have remained in unlawful detention since December 2020.

Over a 100 journalists have been forced to flee Belarus to avoid both persecution and prosecution.

Editor-in-Chief Miceal O’Hurley has noted that following the hostile intercept of Ryanair flight FR4978 from Athens to Vilnius by the Lukashenko regime, which was accomplished by its forcible diversion to Minsk by an armed Belarusian air force fighter, even exile for safety has been rendered meaningless.  The Lukashenko regime orchestrated the forced landing of the Ryanair Flight for the sole purpose of seizing journalist Roman Protasevich in one of the most brazen acts of air piracy recorded in the annals of history.

Journalist Bob Woodward, of Watergate investigative journalist fame, is quoted as saying “Democracy Dies in Darkness.”  The nascent demonstration of democratic will emanating from the Belarusian people in August 2020 with the election of Svetlana Tikhanovskaya to the Presidency of Belarus (only to have it stolen by the Lukashenko regime) demonstrates how the survival of democracy and freedom in Belarus depends on the survival of the Belarusian free press.

Diplomacy in Ireland – The European Diplomat joins journalists and publications from around the globe in expressing our solidarity with the brave women and men who still manage to report from Belarus, despite the grave personal risk of doing so, knowing full well the fate of their colleagues who have disappeared into Lukashenko’s dungeons.

We also join our IAPC colleagues on calling for all European Governments to re-double their efforts in the area of the protection of journalists everywhere, especially in Belarus.