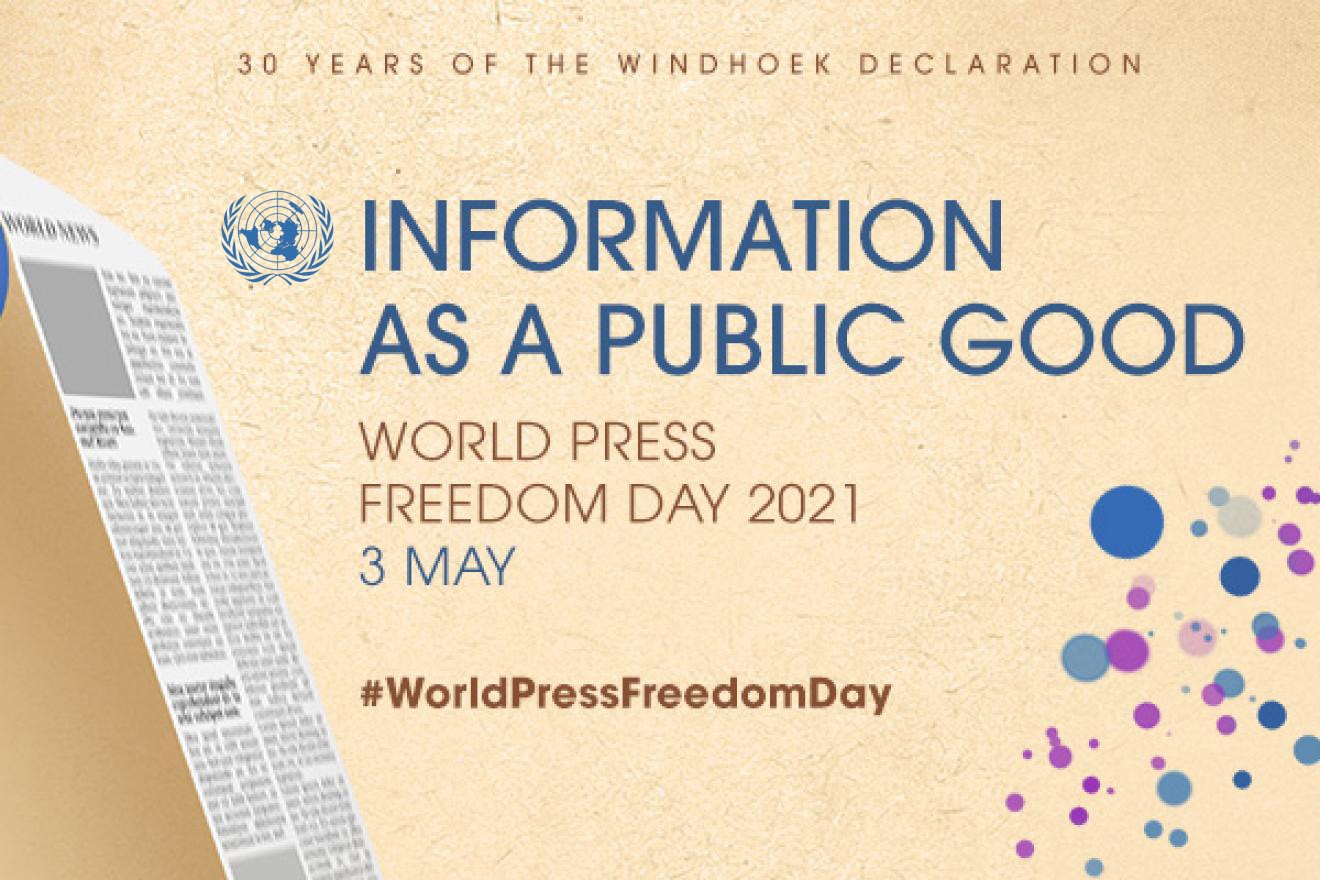 DUBLIN, CORK & BELFAST – In celebration of World Press Freedom Day, 3 May 2021, Diplomacy in Ireland – The European Diplomat joins with our media colleagues worldwide to decry a growing trend of illiberalism in which governments are restricting long-cherished media freedoms by legislation, policy and practice.  In just the last year, the growing trend of governments exploiting the Covid-19 pandemic as an excuse to block access to crucial public information and to crack down on press freedom in general has become particularly troubling.  Such restrictions are growing, even as these very same governments decry the spread of disinformation and confusion that puts lives at risk at a time that  highlights the need for rigorous journalism, fact checking and reporting.

To mark the United Nations’ World Press Freedom Day, Diplomacy in Ireland joins global press freedom advocates in calling for countries to roll back restrictions designed to hamper coverage.  The theme of this years’ United Nations event, “Information as a Public Good,” focuses on improving production, distribution and reception of journalism, and to boost transparency in public information.  According to Reporters Without Borders, there has been a 12 percent decline in media freedom worldwide since 2013.  Speaking from New York, the Chair of the Overseas Press Club’s Press Freedom Committee, Peter Spiegel, echoed this sentiment, “Journalists should be allowed to do their jobs without fearing retribution or censorship.”
Meanwhile, journalists have also faced increased risks, with the Geneva-based Press Emblem Campaign reporting that at least 1,060 media workers died from COVID-19 between March 2020 and April 10 2021.  Diplomacy in Ireland – The European Diplomat joins with our colleagues everywhere, and the Overseas Press Club, in drawing attention to the following press freedom threats:
China has ramped up its use of digital censorship, surveillance and propaganda while expelling foreign journalists reporting on COVID-19 cases.  It remains among the lowest-ranked countries in the world for press freedom overall, ranking third to last on the World Press Freedom Index, with aggressive moves against media such as the conviction of publisher Jimmy Lai and others targeted with the national security law in Hong Kong.
Many other governments have used COVID-19 as an excuse to restrict access to public information.  Iran imposed measures to prevent news media from reporting on the country’s COVID-19 death toll.  In Tanzania, the government called the pandemic a “western conspiracy” and used it to justify force against journalists and impose an information blackout.  Serbia and Zimbabwe imposed restrictions on reporting the pandemic and other sensitive topics have led to journalists being jailed.  In Central and Eastern Europe, the Council on Foreign Relations reported that press freedoms are shrinking as authoritarianism rises, with the government filing lawsuits against hundreds of journalists in Poland, anti-disinformation laws that criminalise legitimate reporting in Hungary, increasing government pressure on journalists in Slovenia and rising attacks on journalists in Slovakia.
The United States, once a bastion for safeguarding the liberty of journalists, has become increasingly restrictive and has moved towards adopting a more authoritarian stance towards the media.  The Freedom of the Press Foundation reported in December that arrests of journalists in the U.S. ballooned by more than 1,200 percent compared to 2019, including for charges of violating pandemic-related curfews.  The arrest of journalists covering protests, especially when the deaths of people of Colour has occurred at the hands of the police, has been increasingly problematic.  Some journalists have even been sent to trial over refusing to stop reporting, photographing or filming demonstrations.  Under former President Donald Trump, the U.S. Department of State, which regulates immigration laws, announced planned restrictions of journalist Visas to limited periods of between 6-12 months, thus deterring journalists from accepting assignments to the United States where they would not be able to reasonably bring family or set up house with their family.
In Ireland, An Garda Síochána have used harassment laws to thwart journalists from conducting legitimate investigations and are now asking Dáil Éireann to pass measures prohibiting Garda from being photographed or recorded, despite a litany of historic and ongoing abuses in the force.  The O’Higgins Commission, which was looking into the way An Garda Síochána handled their dealings with whistleblower Garda Sergeant Maurice McCabe seemingly suppressed a recording of a meeting in which two senior Garda were prepared to “perjure themselves” to blacken McCabe for having exposed widespread corruption in the Garda.  Reporting by the Irish Examiner indicated the two senior Garda were planning to tell the O’Higgins commission that during a particular 2008 meeting McCabe conceded his complaint against a senior officer in the Garda was motivated by a “grudge.”  According to further coverage by the Irish Times, “That was blown out of the water when McCabe produced a transcript of the meeting in question,” from a recording he made, according to Irish Examiner reporting.  RTÉ later carried the story.  Maurice McCabe eventually received €5 million in compensation from the State, owing in part to the investigative journalism of the Irish Examiner.   According to historic analysis, countries with greater press freedoms enjoy fewer incidents of corruption as the media are considered an integral component of ensuring transparency in civil society – a fundamental element of accountability and good governance.

While the Republic of Ireland ranked 12th in the latest press freedom index published by international non-profit Reporters Without Borders in 2021, the organisation warned that press freedom in the State remained under serious threat from long delays to defamation law reform and a high concentration of media ownership.  Ireland’s advancement in the rankings was not do to any positive reform or commitment to journalistic freedom by the government but more accurately reflected the growing authoritarian conduct of other governments with regards to press freedoms which pushed their countries down in the rankings.  Despite journalists having the right to engage in reporting, including photographing in public places to cover activities of public interest, Garda have asserted the extremely troubling position that they have the right to confiscate such recordings and photographs as “evidence” without pointing to an underlying crime having been committed.

Reporters Without Borders also underscored significant threats to the safety of journalists in Northern Ireland as one of the factors marring the press freedom record of the UK, which was ranked 33rd.  Journalists covering paramilitary activity and organised crime in the North “remain at serious risk” more than two years after the murder of journalist Lyra McKee in Derry.  Journalists report an uncommonly high incident of death threats according to Reporters Without Borders.  The Report’s analysis specifically underscored November 2020 agreement by the Police Service of Northern Ireland (PSNI) to pay damages of £875,000 to journalists Trevor Birney and Barry McCaffrey following their 2018 arrest.  The arrest of these two journalists later ruled “inappropriate” by Belfast judges, and the seizure of their journalistic materials.

Governments have also increased censorship and imposed new restrictions on online news operations.  In India, the government used digital media rules imposed in February to censor online news.  Bangladesh invoked its digital security law to jail cartoonist Kabir Kishore, who was released in March and reported that he had been tortured while in custody.  The European Parliament on April 28 approved rules that allow governments to order internet companies to remove online content deemed to be “terrorist content” within one hour without judicial oversight, a move press freedom and civil rights groups fear could be used to ban material governments do not agree with.  In the U.S., press freedom groups are watching a pending U.S. Supreme Court decision that would affect crucial digital collection tools for data journalism.