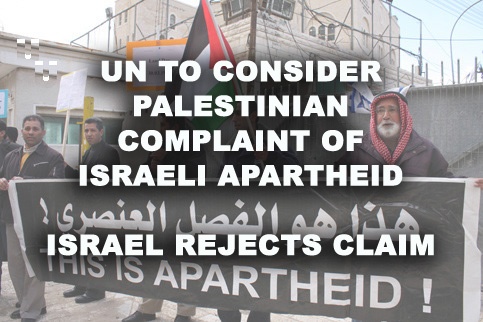 NEW YORK – Following a formal complaint by the Palestinian Authority, on Friday, 30 April 2021, a United Nations (UN) arbitrations committee will be empanelled to investigate the accusation that Israel has committed acts of apartheid.  The UN Committee on the Elimination of Racial Discrimination (CERD) will assume responsibility for the enquiry.

Who is CERD and What Do They Do?

CERD is the UN monitoring body of the 1969 Convention on the Elimination of Racial Discrimination.  An 18-member body, it examines all UN States for compliance on a regular basis.  Israel has come under scrutiny by CERD previously, as have all States in the UN.  The last CERD enquiry was in 2019.  Israel has cooperated with all previous CERD enquiries.

Both Israel and the Palestinians are signatories to the Convention on the Elimination of Racial Discrimination which, under Article 3, strictly prohibits apartheid:

“States Parties particularly condemn racial segregation and apartheid and undertake to prevent, prohibit and eradicate all practices of this nature in territories under their jurisdiction.”

Problematic for this dispute is the utter lack of definition of ‘apartheid’ in the Convention.  Critics have charged that as with ‘genocide’, ‘apartheid’ carries a highly-charged, emotive connotation and shifting opinions about its definition leave the legal usage of ‘apartheid’ open to accusations of application for political purposes.

The Palestinians initially filed their complaint with CERD on 23 April 2018.  The issue was scheduled to be considered in 2020, however, the Covid-19 pandemic intervened and delayed CERD consideration.  The complaint charged that Israel is actively violating Articles 2, 3 and 5 of the convention through their actions in East Jerusalem, Gaza and the West Bank.

Momentum for Recognition of Israeli ‘Apartheid’

In 2017, a UN agency, Economic and Social Commission for Western Asia (ESCWA), published a report accusing Israel of imposing an “apartheid regime” of racial discrimination with regard to the Palestinian people.  The report was the first instance in which a UN body had clearly made the charge of “apartheid” with regard to Israel.  UN Under-Secretary General, and ESCWA Executive Secretary Rima Khalaf, called the report the “first of its type [from a UN body] clearly and frankly concludes that Israel is a racist state that has established an apartheid system that persecutes the Palestinian people.”

Immediately following the report’s release, UN spokesman Stephane Dujarric told reporters in New York that the report was published “without any prior consultation with the U.N. Secretariat.”  Dujarric stated, “The report as it stands does not reflect the views of the Secretary-General (Antonio Guterres),” adding, “…the report itself notes that it reflects the views of the authors.”  Uniquely, the report was ordered withdrawn by the Secretary General after strenuous objections by Israel, the United States and others.  It is no longer available on the UN or ESCWA web site.  A request to the UN for a copy of the report by Diplomat Ireland has gone un-answered.

In 2020 the issue of Israeli “apartheid” arose again in the UN.  Under UN Economic and Social Council resolution 1996/31, the UN Secretary General received a Joint written statement submitted by Al-Haq, Law in the Service of Man, Al Mezan Centre for Human Rights, BADIL Resource Center for Palestinian Residency and Refugee Rights, Cairo Institute for Human Rights Studies, Defence for Children International, Habitat International Coalition, and Palestinian Centre for Human Rights, non-governmental organizations in special consultative status in which the accusation of Israel operating an “apartheid regime” with regard to the Palestinian people was used repeatedly.

Israeli Authorities and the Crimes of Apartheid and Persecution, which again levelled the accusation of “apartheid” at Israel.  The report was widely hailed by advocates for the Palestinian people as well as senior diplomats from numerous Governments, but is widely criticised by Israel and its allies as lacking in both context and objectivity, relying on factual inaccuracies and failing to meet commonly understood use of the term “apartheid”.

Israel’s Mission to the UN in Geneva issued Israel’s initial response, after CERD indicated on Friday last it would advance the matter.  His Excellency Gilad Erdan, Israel’s chief diplomat to the UN, replied in a prepared statement saying, “[CERD] has applied discriminatory standards against Israel to justify its outrageous decision on the admissibility of the politically motivated Palestinian complaint.”

Given the UN arbitration committee’s willingness to examine the Palestinian’s complaint, the issue will once again place the UN in the midst of a long-running dispute between the Israelis and Palestinians.  Observers are keenly watching how traditional Palestinian advocates in the Middle East who have now signed the Abraham Accords with Israel, will react in the UN.  The move will also further distract United States President Joe Biden from his domestic agenda as the U.S. has been an unwavering ally of Israel and oft times a fierce critic of the UN.  Biden has gone to great pains to return the U.S. to multilateralism and shirk-off the mantle of isolationism that prevailed during the Trump era.